“It’s really amazing that the four of you have accomplished so little in the four years since college.” -Shoshana on HBO’s Girls.

On May 23rd, I will officially have been a college graduate for four years. Four years. I will have been graduated from college for the same amount of time I was IN college. And in high school. Where did the time go?!

In four years of college, I accomplished a lot. I mean, my life changed. I met a ton of new people, made lifelong friends, lost a couple of friends, had a lot of firsts (and seconds and thirds and… so on), lived in different places (from one side of the country to the other), and changed my drink of choice approximately three times.

But when I actually think about it, a lot has changed. I mean, I didn’t go through four years of school and graduate… but I’ve worked at three different companies, met new people, have been living with my boyfriend for over a year, and desire a different kind of night life.

So if you’re in the same boat as me, feeling like you haven’t done much since graduation, you have. Here are 10 things you have probably accomplished in the four years you’ve been out of college.

1. You’ve entered the real world. Even if you’ve been in grad school since graduation, you’re not an undergrad anymore. And if you are working, think back to how it was for you when you just graduated. Getting that first break into real life isn’t easy. And once you’re in a workplace, accepting the fact that you’re not a student anymore and you have to learn how to do things and then do them on your own isn’t easy either. But you did it. And that was so long ago that you totally forgot what it was like before you became the real world maven that you are now.

2. You (hopefully) have been promoted, gotten a raise(s), or gotten a new job (with a raise). You’re not entry level anymore. You might not be the most experienced person at the office, and you still have a LOT to learn, but you’ve probably been rewarded with at least one raise (hopefully more) if you haven’t been granted a promotion. Also, in four years, chances are you’ve changed jobs. So not only have you scored one job, but you’ve probably scored more. Not something you were too keen on accomplishing four years ago.

3. You shrunk the large amount of “friends” you had to an acceptable size. I had way more friends when I was 22 than I do now at 25. Like way more friends. And it’s not that I didn’t like a lot of the people I was hanging out with. It was just way too many people to keep track of. Not too many as in when I was in 8th grade and had about 30 people’s initials in my AIM profile listed as my BFFs… but too many in the sense of – you’re 25. Grow the fuck up. So I did.

4. You’ve made new friends. As I said, your original friend group has shrunk, but one of the reasons it did was to make room for new friends. You’ve met people through other people. Through work. Through relationships. Through living in new places. And that’s an accomplishment within itself.

5. You’ve rid of FOMO. Well hopefully you’ve rid of it. Actually, I’m not too sure that FOMO really ever 100% goes away, but for the most part you just don’t care anymore. A night out when you have to get dressed up and spend money vs a night on the couch where you can relax and save money? A night on the couch often (not always!) wins. I mean, if that doesn’t tell you you’ve grown up a little, then I don’t know what would.

6. You can take care of yourself. It might seem stupid to say now, but I am much better suited to take care of myself now than I was four years ago. When I graduated college I couldn’t take care of myself for shit. I had no savings, no knowledge of how to even start saving, and a strong desire to shop shop shop shop shop. Now, I pay for things, I do NOT shop as much, and I can cook myself healthy meals. I also clean. All things this girl would barely ever be caught doing four years ago. Yeah, some people have accomplished buying condos, cars, or houses, but you don’t need to have the money to do such things yet. If you can manage to take care of yourself by now in some way, you’re doing something right.

7. You’ve gained relationship experience, whether it’s been good or bad. Chances are, you haven’t been single and celibate for the entire time you’ve been a college graduate. You’ve most likely had some experiences (dates, crushes, break ups, Tinder meet-ups gone astray, cheating scandals, etc) that have brought you, well, experience. One of the reasons I may feel like nothing has changed since graduation is because I’ve been dating the same guy since. But… we broke up for a few. We’ve gone through some shit. And we certainly aren’t in the same relationship we were back then as we are now. I also live with a boy and he nor I have been thrown out a window yet. So that’s an accomplishment.

8. People you know (maybe yourself?!) are getting married.. And you watch it all happen, most likely on Facebook, but that still counts right?! Maybe you haven’t accomplished the daunting task of getting married, or even engaged. And maybe none of your close friends have either (we’re all still VERY young). But to watch an old friend, acquaintance, co-worker, an ex, or a friend’s ex get engaged or married is quite the accomplishment. It’s like OH SHIT people I KNOW that are MY AGE are getting engaged and married. Where does that lead me? CUE QUARTER LIFE CRISIS INTERNAL FREAKOUT. Perhaps this is not an accomplishment, but once you get over the internal freakout it will be. Umm, when is that?

10. You’ve grown up. Maybe not into a full fledged adult, but you’re getting there. You don’t want to go out to bars where “all the 21 year olds are” anymore. You actually enjoy grocery shopping and trips to Bed Bath and Beyond and Target (or maybe this is just me, is it just me?). And you sometimes find drinking wine on the couch with friends to be more exciting than a night at a wild club where you will black out and spend the next day throwing up in it’s entirety (love the dancing, hate the puking). But this is all okay. You’re still having fun and doing things people your age should do (hopefully). It’s just different. And that means you’re growing up. And guess what? Growing up is an accomplishment. So congrats! 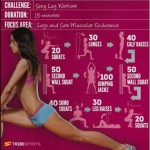