I was so naive and entitled during senior year of college. After completing four well-respected internships, turning in a number of fantastic projects and papers, and dealing with multiple guys “showing interest” in me (or so my conceited self thought), I was walking on air. I thought I was great. I thought I was awesome. I thought I was special.

Little did I know I was in for a wake up call that was going to rock my little universe. That wake up call being the real world.

My conceited attitude about myself quickly changed as I got rejected from job after job and the only guy seemingly interested in me was my boyfriend. Eight months after graduation, I was living at home, in the same relationship, and was finally offered my first job. At that very moment, I realized that I wasn’t special. The life I was living then was not the life I had pictured for myself post-college eight months prior. I knew I was going to have to put myself out there and gain a hell of a lot more experience (which I honestly thought I had at age 22) to be successful in the future.

Now, I probably could have sped up this thought process a bit if my senior year self was aware of a few things. Here are 11 things I wish I knew in college:

1. Network, network, network. Networking is like life. It might be awkward, but you have to deal with it… and it never gets any easier. The more out of college you are, the less of a chance you’ll have to talk to prominent people in your industry. I remember when our college would throw networking nights and I would just mingle with friends in a corner eating the free food. Now I want to kick myself in the face because, like, WHO WAS THERE?! WHO’S EMAIL/PHONE NUMBER COULD I HAVE GOTTEN THAT I WOULD BENEFIT FROM NOW? WERE THE FREE CALORIES WORTH IT?! WERE THEY?!

2. Your resume probably isn’t special. Unless you’re some sort of prodigy, your resume probably looks like everyone else’s. Sorry, but it’s true. Not everyone has had 4-6 internships, but a good chunk of people have. Not everyone has started a blog or has a perfect GPA, but you’re not the only one who’s accomplished such things. Even if you have a pink scented resume, Elle Woods already did that. Now a green scented resume… That’s different. But the content — it’s probably the same as plenty others. You’re not special. And if you stop thinking that, your transition into post-grad life – unemployed OR employed – will be much easier.

3. Stop talking to your ex(es). Don’t waste your mouth’s time and energy talking to some boy you used to know. Don’t waste your fingers’ time and energy texting (or snapping?) some guy who you are either never getting back together with — or at least never should get back together with. You only have a number of months left in college. Spend that time and energy on someone else. Even if nothing comes of it, at least you had new experiences and met new people. At least you didn’t waste your time dwelling on the past, rather than looking towards the future. And years later, you won’t look back at your college self sneaking to his place on a random weekday night to hookup without telling your friends and think WTF was I doing?!

4. If you have dreams of moving somewhere, move there right after college. Don’t say you’re going to wait a year after you’ve settled into a routine. Chances are, you might become too comfortable. Don’t wait three years because you’re going to try and save up enough money to move  — you never will. The later you wait, the more settled down people will be with their lives and groups of friends. Moving to a new city in your mid or late 20s is like transferring schools. It’s always harder to find your place after everyone else has already found theirs. So if you know you want to take a leap, DO IT NOW. If you find you don’t like it, all you have to do is go home or try somewhere else. Sure you might have to or choose to move later in life, but don’t delay it if you already know that’s what you want.

5. Stay in touch with all those people from your internships! It might be awkward giving someone a random phone call on a random day weeks or months after your internship ends, but it will make you stand out. It will make so-and-so remember you. And it will probably lead to a job one day – whether it’s at that company or at a company they can refer you to. You never know who knows who. And who wants to have all these awesome internships on a resume and years later have absolutely no contacts from said awesome companies? It sucks.

6. Don’t compare yourself to others. Everyone has a friend who gets a job months before graduation, and whether that is you or not — who cares. Everyone forges a path for them self after college and everyone’s road is different. You didn’t do anything wrong because so-and-so got a job offer and you’re still stuck searching and applying.  Sure, getting a job after college is based on your experience and abilities, but it is mostly based on timing and luck. You might have all the connections in the world, but if none of them have an opening they know of for you, you’re out of luck (for now). You also have to find a company you personally clique with. Just because you’re qualified for a position, doesn’t mean you will have a connection with the person interviewing you. Is it luck if the person interviewing you for a job went to the same high school as you and hires you because you have that in common? Yeah. There’s plenty of hoops to jump through when finding a job. It will happen when it happens.

7. Save. money. Everyone kept saying save your money, but then Urban Outfitters opened up down the street from my senior year house and it was all downhill from there. The rest of my money went to lean cuisines and booze. You have no idea how long you’re going to be unemployed after college ends, so it’s good to have savings just in case. Even if you do have a job lined up, you’re still going to want some money in the bank. What if you have to move? What if you have to buy a new computer? Or a car? When you’re a few years older and barely getting by because… alcohol, you’re going to wish you saved money in college.

8. If you’re not 150% feeling your relationship, end it. After college, you’ll be thrown into the real world where the chance to meet prospective hook ups and significant others in person is slim to none (it’s goin’ down… I’m yellin’ Tinder). You won’t meet a new batch of people your age every couple months in class (unless you go to grad school, but still: not the same). You won’t be able to go to your college bar on Friday night and be surrounded by people you know. You won’t be able to just go home with some dude from the bar because in the real world, you can’t just go home with randoms… 1. They most likely don’t live within walking distance of your place and 2. They could be a murderer or a rapist. You only have a short time left of the college life. Do you want to graduate and feel like you wasted time you could have spent mingling and hooking up with others on some guy you weren’t 100% interested in to begin with? Probably not.

9. Don’t stress out if you don’t have a job set for yourself right after graduation. Life isn’t going to end if you don’t know what you’re going to do after you graduate. Until you get a job, enjoy your freedom. Enjoy your Summer. Once you start working, you’ll be working forever (unless your plan is to marry rich and not work, which is actually not a bad plan). Summer days will be spent in the office and if you want to go away or take time to yourself, you’ll have to get permission. For now, you’re free to do whatever you want (depending on how much money you have of course, which probably isn’t a lot, so whatever). EMBRACE IT. You’ll find something eventually.

10. Do something (anything!) that makes you stand out from the crowd. Imagine if I had started a blog during college, rather than after. With a website on my resume prior to graduation, prospective jobs might have looked at me a little differently. If you can do anything to show your skills and ambition, DO IT. If you create a website, it doesn’t even have to be a successful website. Just the pure fact you do something on your own in addition to school and internships (and after you graduate, applying to jobs and going to the beach), will surely make you stand out from all those other college grads out there.

11. Enjoy yourself. Because after you graduate college, you will never experience anything like it again. I’m not saying it’s all downhill from here, because it’s not, but it’s different. Right now, you’re young. You’re carefree. Your friends either live with you or live down the street from you. And guess what? They have nothing to do other than spend time with you (and write a paper or two… but, like, who cares about that?). So party it up, my friends. Make memories. Take pictures. Gain 15 pounds during Senior Week. Soon enough, you won’t want to go back to college… but – if you do it right – you’ll definitely miss it. 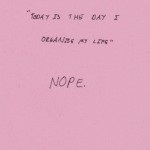