I have been feeling particularly homesick for college lately. I think it might be the fact that temperatures are warming up, the snow is melting and spring is right around the corner. That was always my favorite time in college. When the snow covered campus transitioned from a quiet, seemingly deserted landscape to a sunny party filled with frisbees, t-shirts and drinking on porches. Man, those were the days. I honestly wish I would have relished them more while I had them.

If I could rewind time to my college days (and, boy, how I wish I could!), I would savor every moment. Sometimes I feel like I was in such a hurry to get out of college, I didn’t fully appreciate the fleeting time I had there. Hindsight is 20/20, right?

I was recently struck with the realization that I can’t be the ONLY one that would do things differently if I had the chance to re-do my college days. So, I posed this question to a bunch of real people: “If you could rewind back to college knowing what you know now, what would you do differently?”

I received responses from a bunch of college grads, ranging in age from early twenties to late sixties, and I wanted to share the undeniable wisdom and reflection with you. Be forewarned, all of the responses are anonymous. Because, you know, not EVERYBODY wants to be Internet famous.

If you’re a college grad yourself, maybe some of these responses will resonate with you. If you’re still in college, I hope they make you think and inspire you to appreciate every last second of your college career. As I’m sure all of these people would tell you, it goes by WAY too damn fast.

If you could rewind back to college knowing what you know now, what would you do differently?

“I would never skip class! It seemed like it wasn’t a big deal until I realized that the stress of worrying what I missed was greater than the feeling of being lazy.”

“I would have studied harder, and gotten to know my teachers and counselor better. I would have majored in teaching too.“

“I would have put more effort into finishing. I thought it would be easy to take a break and go back, but I’m finding that it is pretty hard. I’ll be 26 in a few weeks and won’t be able to go back to finish until the fall when my oldest child starts full day kindergarten. Even then, it will have to be part time, so it will take longer. If I would have just gone back right away (5 years ago!) I would have my degree by now. At this point, I’m hoping to complete my degree by the time I’m 30.”

“I would have chosen writing as a major over interior design. There aren’t really any jobs in my major so I had to find another career path. I really enjoy writing so if I wasn’t going to get a job out of school, at least it would have been more fun!”

“I would have pledged a sorority, just for shits and giggles. I was always curious about that.”

“I wish I wouldn’t have studied so hard! In the many job interviews I’ve had, not one of them asked for my GPA.”

“I would have looked harder for a college that suited me–either attending a more academically rigorous college, or one that was more hippie and progressive. I spent one semester abroad during college, and if I had to do it over again, I would have spent a whole year or more abroad! I only got to see Australia. I would have spent a semester in South America or Europe as well.”

“I definitely would have accepted my Phi Beta Kappa pin!“

“I would have been more social. I turn 27 next week and if I look back, I have the same life now that I did then. I worked hard (2 jobs), held board positions on 2 student orgs and did plenty of studying, but I never really did much partying like many typical college students. Now I feel like I’m past that point and kind of wish I had done it back then…especially when I had the ability to recover faster.”

“I would have been less responsible and had more fun… taken more spring break trips, studied abroad, and blacked out a whole lot more. I would have stressed a whole lot less because all those big, scary problems I thought I had then were so trivial in comparison to what we face as real adults. Taxes? 401k? Health insurance? Unemployment? Holy shit, I actually have to take care of myself now!”

“I would not have changed my major 8 times…“

“Get outside my comfort zone more by getting involved with more campus activities, and leave sooner to avoid all the student loans! Also, I would have listened to myself and gone for what major I really wanted and not what others ‘knew’ was best for me.”

“When it came to my major, I would have followed my heart and passions over following my head. I wasted 2 years in a program before I realized I didn’t have the heart for it. I finally majored in what I’m passionate about and it was a drastic change! Everything improved, especially my grades.”

“I would have majored in an immediately useful area (accounting or nursing). Instead of 5 years of graduate school with a chemistry degree, I would be living as an adult already – with more freedoms than being in school allows.”

“If I could do anything different in college, I would have definitely taken advantage of studying abroad. I graduate in 2 months, and I’ve never left mainland USA. There are so many beautiful places that I yearn to see.”

“I could’ve studied more to up my GPA, as I was turned down by multiple companies for it. I could’ve kept up with how much I worked out in high school so I wouldn’t’ve gained 50 pounds over my college career. I could’ve been involved in more organizations so I knew every person on campus, but I figure with rugby, pep band, audio engineering society, and being a student supervisor in an on campus dining hall, I knew a good chunk of them. I met tons of awesome people, went on plenty of crazy adventures, and made it through a tough school alive. I’d rather not even try to find something I regret because I really don’t want to change anything.“

There you have it! Some college grads would make huge changes in their college careers, and others wouldn’t change a thing.

We’d love to hear what you would do differently, if anything. Share your thoughts in the comments!

Kat is a 2011 graduate of the University of Wisconsin-Milwaukee, where she got a B.A. in Communication and a minor in Journalism, Advertising and Media Studies (which is really just tacked on there to make her feel much more accomplished than she actually is). She now lives in the booming metropolis of Appleton, WI. When she's not working as a freelance writer, you can probably find her eating (YUM TACOS), attempting to plan her kick butt wedding (aka a lot of complaining, crying, wedding-hating) and talking in a really high pitched voice to her dogs. Crazy dog ladies, represent. You can watch her pretend her life is super put together on her blog at www.lemonadelinings.com or can follow her really entertaining (or so she likes to think) tweets at @kat_kuehl. 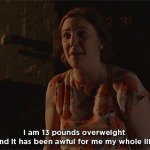 12 Signs You Were a Chubby Child