After college, you might not want to rage every single weekend night. Really – you won’t. Sometimes you’ll be tired. Sometimes you’ll be broke. And sometimes you’ll be both. But that doesn’t mean you have to stay in by yourself watching Titanic every time you don’t feel like blacking out. When you’re too tired/broke to go out, but still want to be social, you have other options… for instance, participating in a ‘casual night out.’

When you think ‘casual night out,’ you probably think jeans, beer, and a little Irish pub that lacks dancing and has open tables. You don’t have to get dressed up because you’re not going anywhere with a dress code… and you don’t have to prep yourself for the impending hangover because you’re going out for ‘casual drinks’ … meaning you’re not going to get that drunk.

Casual drinking might just be the most dangerous type of drinking there is. Whenever my friends and I attempt to have a ‘casual‘ night, it usually ends with dancing in a bar where no one else is dancing, shots that I don’t have the money or tolerance for, and throw up (lots of it).

Being casual is an art – You have to do it right to ensure a good time. That is why we are leaving you with 10 steps you must follow in order to have a successful ‘casual night out:’

1. Wear jeans. The more casual you feel, the better.

2. Do not wear heels. You’re being casual, so there is no need to worry about having thinner-looking legs. Flats, sandals, or boots are fine and very much appropriate when being casual. Who wants painful feet when ‘relaxing?’ Not me…

3. Go to a bar early. You don’t have to worry about pre-gaming that hard (if at all) because ‘you’re not on a mission to get blackout tonight,’ so going to a bar early will do.

4. Sit at a table. Being casual does not mean standing. If you’re not going to be on a couch watching re-runs of Sex and the City while drinking wine, you might as well be sitting on a bench at a bar mingling with your friends over beer, nachos, and obnoxiously loud music. 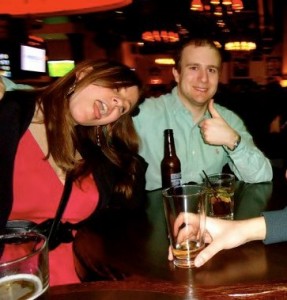 5. Order food if you want at said table, but do not order a meal. If you order a meal, you will be too full to get drunk. But if you don’t eat at all, you will get way too drunk and won’t make it past like 9pm. Just don’t eat too much. Remember: Casual times call for casual calories.

6. Take a round of shots. You’re sitting down, so it’s totally casual (right….).

7. Keep drinking. You will be able to do so since you are most likely sitting and are not trapped between two sweaty guys at a crowded bar. The easier it is to sip your drink, the drunker you will get.

8. Get another round of shots. Once you start taking ’em back, you won’t stop. It’s just too hard. Peer pressure…

9. Get off your seat and dance. So what if the bar is blasting a horrid Country song and no one else is dancing? Get off your ass and bust a move. As Dave Matthews said, ‘Turns out not where but who you’re with that really matters,’ and he was obviously talking about dancing at a non-dancing bar while being ‘casual’ with friends.

10. Don’t be surprised when you’re on the toilet dry heaving the next morning. You ‘casually’ blacked out by accident last night… Which is whatever… I mean, at least it was still casual.

All in all, if you’re looking to have a good time, have a ‘casual night out.’ Believe me – it won’t be anything close to casual. Except casually awesome.

Where Are They Now? Two Years Later: Tom DaSilva