I’m not going to lie. After the first three episodes of HBO’s Girls, I saw it as a horrible version of Sex and the City with ugly people running around naked. I was appalled. Hipster girls from Brooklyn who don’t wear makeup and have names that only Jewish women from the 1800s had – not exactly my thing. But for some reason I kept watching until I actually started to enjoy the show. And now, I look forward to watching every week. The show follows four twentysometing girls who are all dealing with the hardships of being young and ‘poor.’ 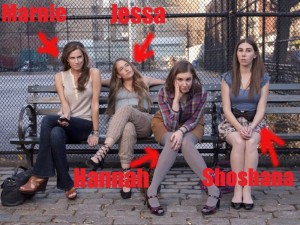 Hannah is this ugly, chubby-but-not-chubby ‘writer’ who does NOT wear makeup (EVER), has no income, has been graduated from college for two years, and can somehow afford to live in Brooklyn even though her parents cut her off when the show started… AKA two years into her unpaid internship. #WTF? Hannah should have been cut off a year and a half ago after she graduated. Okay, so you want to be a writer and you can’t get a job? Live off your parents and graduation money for a few months and then get an EFFING job. Work at, like, Starbucks, do an unpaid internship for max a year, and write in your spare time. And if no ones hiring you, re-evaluate your life and make a different (slash more realistic) life plan. At one point, after quitting her post-grad unpaid internship, Hannah got a random office job, but then she quit because her boss touched her inappropriately on the daily. Now she is unemployed and does nothing except write a faux book, whine about everything, and have sex with her booty call turned boyfriend, Adam, who pees on her in the shower and who used her for sex for 99% of the time before they started dating. Adam is a part-time aspiring ‘actor’ and full-time freak. The pair should just move to LA and live in the Oakwoods (a place where aspiring writers, actors, and producers go to die – literally). Oh, and Hannah’s ex-bf from college was gay. Like, flaming. And she had no idea. NBD.

Marnie is a super hot, uptight biddie stuck in a world of hipsters. She and Hannah must have been besties since they were in the womb because for two totally different people to be able to live together AND keep such a strong friendship, they have to be blood sisters or something. Marnie dated this hipster-in-a-band, Charlie, for four years and then got super bored with him… Like bored to the point where she had to run into an empty room at work to masturbate because some dude hit on her (things like this don’t happen in real life, but whatever). One day Charlie and his weird friend were creeping around in Hannah’s and Marnie’s apartment. They found Hannah’s journal, read it (should have wrote a password protected blog instead Hannah), and learned that Marnie didn’t want to be with Charlie anymore. Long story short – he breaks up with her, Marnie begs for him back, they have sex, Marnie breaks up with him during the sex, two weeks later Marnie sees Charlie at a Brooklyn warehouse party (that all of Brooklyn and two-thirds of Manhattan was at), and meets his new GF who is super free-spirited and spontaneous – and has no idea who she is. Now Marnie is super depressed and is ready for new adventures like making out with her British friend, Jessa, on an old man’s very expensive rug.

Jessa is this crazy awesome British bitch who hates wearing make up and loves fucking anything with a pulse. She recently moved back to NYC where she went to college with Marnie and Hannah, and made her comeback by missing her abortion appointment to casually miscarriage or get her period (we don’t know which one) mid-hookup in a dive bar bathroom. After this, she started to work as a nanny (like you all went to school – does ANYONE work these days?!). She babysat these evil little girls, got hated on by the mom, and got hit on by the dad. It was a typical and casual job for a twentysomething British hipster… until the dad texted Jessa when his fam was out of town and she told him to come to that super awesome Brooklyn warehouse party not knowing whose number it was (why wouldn’t she have her bosses number in her contacts?). Of course he showed up and somehow they wind up in the hospital where the hipster-dilf cries and calls Jessa a tease when she won’t go home with him. Gross. She obv leaves that job… but will she end up going back to it? I mean, she did lose the girls in a playground one day but NBD… as long as they’re still alive.

Shoshana is that girl you knew in college from either Long Island or Westchester that you avoided like the fucking plague because she was so god damn annoying. Sure, she meant well. She was nice. She had nice things (JAP). And one time she actually listened to you say two sentences in a row without butting in. But all in all, she was just sadly too… nice. And annoying. Shoshana is surprisingly Jessa’s cousin – which is weird because Jessa is British and Shoshana is a super Jew but whatever. One time ‘Shosh’ caught Jessa having random sex in her apartment… and she watched the whole thing with a terrified look on her face because she is a virgin. As in she’s never had sex. This is probably because 1. she talks too much or 2. she waited too long and no twentysomething guy wants to fuck a virg (because they bleed and get attached). Shoshana got close to sex once with some guy she went to camp with (see – super Jew), but even he wouldn’t devirginize her. In the midst of trying to cash in her v-card, Shoshana finds herself in many new situations. One being the crack-cident. At the Brooklyn warehouse party that everyone was at, she smoked crack by accident and ran wild through the borough for hours. Literally. And Charlie’s (Marnie’s ex) weird best friend chased after her. He, like, actually cared if she was okay. Will he end up deflowering Shosh? Only time will tell.

See? The show really is a messed up hipster version of Sex and the City. But it’s awesome. And relatable. No – I have never smoked crack by accident (or at all)… but I have FB stalked… and I have liked someone who didn’t like me back… and I have felt very awkward at a good number of parties. So although it still makes me cringe (the show is filled with unsexy sex scenes with gross breasts to boot).. and it still makes me feel awkward even if I’m watching alone in bed.. and I still hate Hannah and her boyfriend and have absolutely no idea why she doesn’t fucking wear makeup… BUT the show is like Jersey Shore and/or a car crash: Once you start watching, you won’t be able to stop. Oh and if you do watch, you’ll feel so much better about your own life. I mean, what could be better than watching four normal girls deal with problems that are worse than your own? And when I say problems I mean Hannah’s face, Marnie’s boring life, Jessa’s STDs, and Shoshana’s voice.

You can catch Girls on HBO every Sunday at 10:30pm. You can also catch it on demand if you’re busy watching Mad Men during that time… or if you’re busy sleeping because you’re old.