To say ‘I love social media‘ is an understatement. I am f-ing obsessed with social media. I sleep with my computer on my night table facing towards me. And the first thing I do when I wake up each morning is check Facebook. I don’t even mean to do this – it just happens. In fact, if I wake up in the middle of the night to go to the bathroom or just because I can’t sleep, I go on my computer. I check Facebook. I check my email. I even browse Twitter for a minute or two if I don’t fall right back asleep.

The Internet craze started for me (I think) in the 3rd grade. AOL came on the scene and my mom created a ‘screen name’ for me on ‘AOL Kids.’ I loved browsing the ‘kid’s only’ websites and playing the ‘kid’s only’ games. At such a young age, I was already fascinated with the world wide web and what it could do. Through the next few years, many people started using AOL… and soon enough, even more people started using AOL’s new chat service, ‘AOL Instant Messenger‘ (AIM). AIM didn’t involve dialing into AOL (thank god for no more obnoxious dial tone). In fact, you didn’t even need to have AOL to use it! With AIM, you received a buddy list full of ‘friends’ and a pretty profile that most likely listed initials of everyone you had ever spoken to up to that point (those were your ‘friends’) and inside jokes. The AIM profile didn’t stop there though. Later, you were able to create “sub-profiles,” which was a website of your info (the link to your sub-profile page went in your profile). In addition to this, the sub-profile site would track who visited your ‘profile’ and how many times… how creepy. Why did we think this was okay?

Then, of course, there was the status. You kept ‘AIM’ on all the time, so when you weren’t actually at your computer, you had a status up. For instance, if you were in the shower, you probably put ‘taking a shower!’ in your status (I know – weird). The responses to these statuses were saved… and if anyone logged you out or shut the computer off – god help them… because now you won’t know who IMed you and what they said!!!

That’s when it all began. The constant need to be in touch with people online… all the time. The need to know where people are and what they’re doing. The need to let others know where you are and what you’re doing. And although we don’t use AIM anymore (except maybe for work), we use other sites and devices that took this obsession a million steps further.

First, we had MySpace – ‘the creepy social media site.’ However, this site unfortunately isn’t that creepy… it is pretty much the same thing as Facebook now. FB just has a better looking layout and users with much more ‘normal looking’ photos. I was on MySpace. My site was decorated with HTML codes I created on my own (couldn’t do that for the life of me now)… It had a song playing when you came to the page (prob Fall Out Boy or Taking Back Sunday)… and it had many creepy pics of myself taking a picture of myself in a mirror (I won’t lie – I was one of those girls). MySpace didn’t last long though once Facebook decided to branch out to high school students.

I got invited to join Facebook senior year of high school in 2005. I thought I was so cool… and even more so when I went to college and joined my college’s ‘exclusive network.’ However, as time went on networks disappeared. Everyone started joining Facebook. Moms, dads, grandmas, grandpas, 13 year old girls, 8 year old boys, ETC. Facebook changed. It even changed with you as you got older! It was like this thing that became part of your every day life… just like eating breakfast and watching E! News. And when Facebook was made available on our phones, people lost it. FB turned into our email… it turned into our AIM… it turned into our webshots… it turned into our bored.com… it even turned into our telephone pretty much (why text or call people to invite them over when you can make an EVENT?). We had (have) so many friends on the site that we don’t even know what to do with ourselves (except maybe to defriend half of them).

And it didn’t stop there. Twitter was created not long after Facebook started to take over… and eventually, it took the world by storm. Twitter created new jobs (social media coordinators and such), a whole new way to market products, and a way for people to get the news without reading articles or watching the television. Perfection. In fact, if it wasn’t for Twitter, you probably wouldn’t be reading this article right now.

The internet giant, Google, obviously had to get involved and created Google+ (snore). Unlike the others though, Google+ was cool for like 5 days and then people got over it. By this point, we had literally built lives on Facebook already. And we weren’t about to do it again on Google. I mean, we already have to concentrate on our jobs in addition to having a million other social media accounts (Twitter, Facebook, LinkedIn, Tumblr, Pinterest, Flickr, ETC)… Google+ would cut into our time of social interaction. And I don’t mean cyber social interaction… I mean REAL LIFE social interaction. Video chatting is cool and all, but I really do need my human interaction time. You can’t, like, take shots with a computer… or can you? 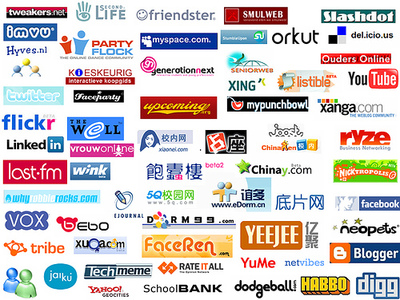 So what is next? What great social media change/addition is going to change our world now? That’s a serious question. I would love to know. Bring it on great people of San Fran’s technology hub… BRING IT ON.

10 Ways to Get Yourself Fired