No, we aren’t talking about the movie. We are talking about something way better than Shia LaWhatever’s claim to faim (Transformers – not Even Stevens). A twenty something’s version of a “transformer” is much different than a bunch of Power-Ranger-like fantasy machines running free through a city (I will admit – I’ve never seen the movie… so that sentence was based on commercials). A twenty something transformer is real. They are so real that the reason you absolutely f*cking love them is because they are so rare that you just cannot believe they really transformed like that

A transformer is someone whose body goes through an immense physical change both in real life and on Facebook. All twenty somethings are fascinated by transformers. They are what make Facebook stalking somewhat exciting. When picture 1/2061 of a person looks completely different than picture 2061/2061, that person is a transformer. This change is not just a new hair color… or a new nose… it is when someone gains three other people in weight. No a transformer isn’t that girl who gained 15 pounds in college… or that guy who got jacked in the past year… A transformer is someone who changed so much that you can’t stop staring or thinking about their new look.

There are many ways a person can become a transformer:

The Freshman Transformer: We all know about the “freshman 15” and after experiencing it, I know it is real. However, as I said, gaining 15 pounds does not make you a transformer… But gaining enough weight to make you look completely different than you did in high school does. It’s very easy to gain 15 pounds in college… Making it very easy to gain much more than that. After you’ve gained the inevitable weight you will gain in college, if you don’t try to lose or maintain that weight, you will most likely head down the road to transformer land. The amount you drink in college never stops growing… and neither will your weight on the scale. So once you start gaining, start losing quick before you even have the slightest chance of becoming a transformer. College is probably the number one cause of transformer-ism.

The Post-Grad Transformer: Obviously, graduating sucks. However, we all go through it and somehow, not everyone turns into a transformer. When someone transforms due to Post-College Depression (PCD), they are clearly eating their feelings. Most people do not drink as much when they graduate from college… so in their free time they have nothing to do except sit on Facebook and eat. This is especially true for the unemployed job seeker.

The “My Job Makes Me Eat” Transformer: Some people transform due to the fact that their job depends on eating and/or drinking. The person who transforms because of this most likely works in advertising, where they are wined and dined by sales people on the daily. People who hate saying no also have a high probability of transforming because of their job – Your co-workers might go out to eat for lunch everyday. People may constantly bring in home baked goods and give you a death stare if you say “no.” If other people are eating all the time, you might feel awkward not eating as much as them.

The “No More Gym” Transformer: As young people in the working world, we need to not only learn how to balance our work lives and social lives –  but we also need to learn how to fit our daily work out into that mix. Of course, when you have to be in work at the crack of dawn and you’re there until your eyes start shutting… you’re not going to go to the gym. But you can at least try to go a few days a week when you can. A person who transforms because of not going to the gym is obviously used to working out on a daily basis pre-career and doesn’t eat healthy… Well, if you’re not going to the gym and you’re not cutting calories, you’re obviously going to gain weight. Duh. If not going to the gym is your only reason for becoming a transformer, maybe you deserve it.

The Widowed Transformer: Like graduating from college, breaking up with your significant other sucks. Some people get so depressed, that they stop eating. Other people get even more depressed and decide to eat their feelings. These people are most likely to become transformers. Break up transformers have probably been cheated on or are not okay with their significant other moving on the day after they break up (hmm, they probably were cheating). 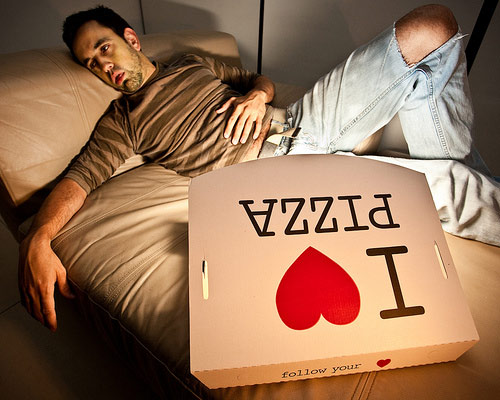 The Boyfriend Diet Transformer: This should only applies to females. Men eat more than women – or at least they should be eating more than women – and when you first begin a relationship, it is hard to smell the pizza your guys eating at 1am and not eat it… and it is really hard to pass up dinner dates (free food). Since most guys don’t want to date the girl who eats the salad with no dressing while they gulf down a cheeseburger, you don’t want to be that girl. So you eat. And since you’re with your man all the time, there is limited time to run to the bathroom to dispose of the disgusting greasy meal you just ate (JK). Another way to become a transformer due to your BF is letting yourself go because you no longer have to look for a man again. Well, this is extremely dumb because if you do let yourself go, your BF may not want to be with you anymore and then you will be stuck trying to find a guy while looking like our friend, Kirstie Alley, at her worst. Like Chris Brown said, “I can transform ya”… and I’m sure he meant it in a different way than “I can make you fat” (I would rather be fat than beaten by my boyfriend, though… or would I…) BUT boyfriends can make you into a transformer.

Life would be boring without transformers. So even though it sucks that you gained some weight, don’t stop doing what you’re doing. We love you.

A Twenty Something’s Holiday Wish List: Gifts for Her