Once upon a time, in a land far far away, Mary-Kate and Ashley Olsen were idolized by just about every girl under the age of 18… The pair was born into stardom – literally. At the ripe age of 1, the twins started their career by sharing the role of Michelle in ABC’s classic sitcom, Full House. That baby grew up throughout the show’s 8 seasons, and by the time the final episode aired Michelle was a few weeks away from turning 9.

The world literally watched these twins grow up. I personally felt like I knew them. One episode (the one where Michelle rode the San Fran trolley by herself around town) she was wearing the SAME pair of overalls that I had from Limited Too!!! I felt like the coolest 7 year old around. Sadly, I will never forget the excitement I felt when figuring that out… That is the obsession level I had with Michelle/MaryKateAndAshley.

Nearing the end of Full House, MK&A began to star in a few classic films such as “To Grandmother’s House We Go,” “Double, Double, Toil, and Trouble,” “How The West Was Fun,” and “It Takes Two” (some of my favorites).

The other video series was “The Adventures of Mary-Kate and Ashley.” When hearing that title now, you probably picture a lot of coke, a lot of fur, and a lot of bones (as in Mary-Kate’s). However, from 1994 to 1997, these videos were about a couple adventures shared by the coolest, sneakiest little girls around. I watched each of these videos on repeat until the tape would no longer play. Such videos in the series included “The Case of the Logical i Ranch,” “The Case of Thorn Mansion,” “The Case of the Mystery Cruise,” and “The Case of the Christmas Caper.”

While the girls were in high school, they starred in two TV series – Two of a Kind and So Little Time. They also starred in movies that got significantly worse each year (probably because we, the viewers, were growing up too and were slowly realizing that the girls couldn’t act). Such movies included “Passport To Paris” (1999), “Holiday In The Sun” (2001), “When In Rome” (2002), and their last – “New York Minute” (2004) – which got nominated for two Razzie Awards and also starred Eugene Levy. See – they really did get worse with age.

After this, Mary-Kate stopped eating.

Anorexia, however, did not stop the ‘power couple’ from becoming two of the wealthiest women in the entertainment industry. First, Mary-Kate told the world ,’yes, there is a reason that my body looks like a rock climbing wall – except instead of rocks, there are bones‘ …and then she went to ano-rehab for a few. After this, the girl’s released their last film together, ‘New York Minute,’ which received two Razzie noms (success).  The twins also graduated high school that year… and when they finally turned 18, they bought the company that had been branding everything related to the Olsen twins since Full House ended. Oh, and then they started college at the prestigious New York University.

It wasn’t long before the twins realized that after repeatedly making the ‘Forbes Celebrity 100‘ list each year, there is no point to writing papers and taking tests… so a year in, they dropped out and moved back to Cali.

‘Post-college,’ the twins decided that they wanted to be recognized as ‘two separate people,’ rather than ‘the Olsen twins.’ Unfortunately, when you literally do everything together in the public eye from age 1 to age 18, people will always refer to you as one single person. The only times I do not think of the Olsen twins as one person is when talking about Mary-Kate’s eating problem (and the fact that she may have had something to do with Heath Ledger’s death).

Anyway, luckily for us, Ashley Olsen used her brain and decided to NO LONGER pursue a career in acting EVER AGAIN (thank god) after ‘college.’ On the other hand, her little-yet-same-aged sister, Mary-Kate, decided to keep pursuing acting, even if no one wanted her. From 2006 – 2011, MK has had THREE minor roles on television… and ONE semi-big role in the 2011 film Beastly, which starred Vanessa Hudgens (you know – that movie that looked horrible?). 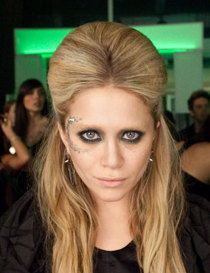 Although they suck at acting (and although Mary-Kate cannot accept that), they do have a knack for fashion. In fact, the New York Times has stated that Mary-Kate is a fashion icon for ‘pioneering her signature homeless look.’ Okay. Maybe – just maybe – she looks homeless due to other factors than her fashion choices… Such as her skin consisting of very boney bones? Ever see a commercial with homeless children from other countries asking for money so they can eat at least once a day? Yeah, Mary-Kate was once thinner than them.

On a good note, the Olsen twins have two high end couture lines, ‘The Row‘ and ‘Elizabeth & James,’ and a t-shirt line called Stylemint. In addition to these, they also have a clothing line and beauty line in Walmart for girls 4-14 called ‘Real fashion for real girls‘ (because REAL girls shop at Walmart!). If MK&A really knew what they were doing on the business side of fashion, they would have moved their line(s) over to Target. When competing in the mega-store fashion world you need to decide if you are the Dunkin Donuts or Starbucks of clothing and accessories. I guess they have made their choice (Dunkies), since they are still in Walmart… Oh, and they also have a line at J.C. Penny called ‘Olsenboye.’ Good thing no one shops at J.C. Penney… 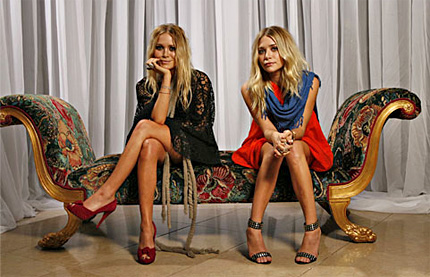 So if you’re wondering what MK&A are doing now, it’s simple. Designing clothes, wearing real fur, getting yelled at by PETA, watching their younger sister (Elizabeth) be prettier, classier, and smarter than them at cool film festivals, drinking cocktails, traveling the world, and re-reading the book they wrote in 2008, Influence. Oh, and Mary-Kate finally scored a role in another movie, ‘Story of a Girl,’ which is in pre-production right now.

Basically, they are living the dream at 25 and have enough money to last them until death – as long as they keep up with their fashion lines and continue to eat (food. is. good). 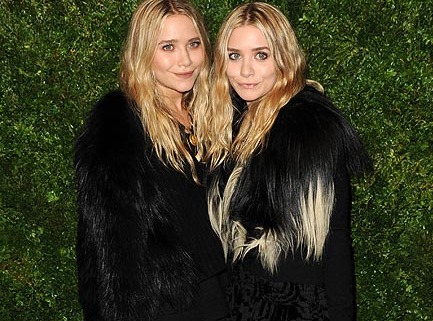