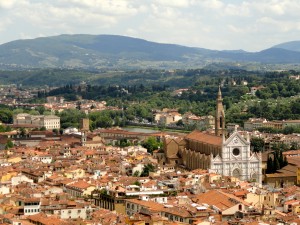 Yes, you read the title correctly- a how-to on traveling to Europe …with your Ex. Who does this apply to? Like…who gets themselves into these sorts of situations? Don’t be quick to judge, this to could happen to you (probably not, but maybe).

Ok so yes, the probability of ending up on a trip to Europe with your as-of-recently-ex-boyfriend is pretty slim. However you someday may just find yourself drunkenly flirting with Valentino in a cramped Italian bar while your American ex-boyfriend that is staying in the same hotel as you stares at you from across the room in disgust and heartbroken agony. WHAT do you do then? You just never know what life is going to throw at you! In case you do find yourself in this unusual (but totally plausible, since it’s happened to me) situation, I recommend the following:

Booking a ticket months in advance to any far-flung destination with your current boyfriend/girlfriend may seem savvy AND sexy. Savvy because you are saving money by purchasing cheap airline tickets and sexy because you are traveling to a foreign country together—duh. But you just never know when that really adorable phrase of his will do a 180 and make you cringe from annoyance, eventually leading up to a domino of other annoying things, then a break up. When booking a trip months in advance with your boyfriend who you aren’t living with yet (sharing shelter is like relationship super glue—that shit sticks things together that shouldn’t even be together), I strongly suggest making it a group trip. Invite some chill friends that are easy to travel with and may even hook up with each other. Thank goodness my friend was with me on my trip to Italy, Spain and France. And I’m secondly thankful that my ex’s friend annoyed her to the point that she wanted nothing to do with him. Bring friend insurance, don’t purchase travel insurance (like you could afford that anyway).

2. Do NOT cater to your ex’s feelings– no matter how sad he looks.

Even if you end on friendly terms, you should not feel guilty about chatting up French guys and giving an Italian stud a smooch. When is the next time you will be in Europe? You broke up for a reason and now as newly single people flung onto land full of exotic people it’s just unfair to think that either of you would not act on any tinges of attraction to a person you can’t even understand. Take advantage of the whole travel experience and that should include socializing with the locals. Do not let your ex try to guilt you into making it ‘easier’ on him. Honestly, your boyfriend is probably jealous. American boys do not have the same appeal to French, Italian, Spanish, etc. girls as American girls do to foreign men. While you are being practically chased down alleys by Italians, he is sitting at the bar with his bro drinking beer and the Italian beauties are looking right past him like he doesn’t even exist. So yes, make out with Valentino on an ancient statue in Florence at 2am outside a bar and yes, definitely hold hands with that artsy French dude in a punk bar– who cares if your ex sees you! Do what you want, being single is freedom!

3. Make your own plans

Unfortunately my trip to Europe was a planned bus trip so I couldn’t totally escape my ex. My friend and I did however decide after day two that we were going to stop meeting up with the guys (my ex and his friend) to do the planned excursions and instead just do our own thing. This also resulted in a realization that my ex and I were totally different. While I was on a tour that had the majority of my day planned out, my friend and I ended up spontaneously skipping some of the events to explore on our own. Meanwhile my ex and his friend were religiously lining up at every single activity with the rest of the herd. I ended up seeing off-the-beaten-path beaches, side streets and met people who showed us where the locals went to eat and drink. My ex shuffled along with the rest to the touristy destinations, only skimming the surface of our planned adventure. Seeing our differences from an outside perspective really put things INTO perspective for me.

This one is superficial but c’mon…it’s true. You always want your ex to think you are hot and wish he could get back with you or at the very least, have one more steamy affair. When traveling through Europe, on a bus (the same bus your ex is on), it is going to take major effort to look attractive at all times. I cannot emphasize the amount of makeup and hair products you should pack in your suitcase. I don’t care if it weighs down your luggage and makes it extra strenuous to heave on and off the bus (chat up some other dude on the tour to help you with that), you will need that full-sized bottle of concealer, hair straighteners (don’t’ forget the electricity converters) and “awakening” eyeshadow. I went through a full bottle of Clinique’s Eye Brightening Cream in 10 days. You will not sleep. You will be partying, touring cities, drinking, partying and walking. Beauty products are key for making your ex crazy with doubt of his decision.

Has ANYONE else ever been in such a unusual situation? Do you have any advice to spare?