Graduations. In real life they are full of loved ones, tears and celebrations. However in television, graduations are often filled with drama, demons and death. Let’s take a look at how our favorite characters said goodbye to their former schools and headed into adulthood with the seven best graduations on television.

No show did graduation like Gossip Girl did. From Serena wearing her tassel in hair, to the fact that everyone forgot to silence their cell phones and let’s not forget Gossip Girl’s special diplomas to the class. However the biggest moment was clearly that this episode let us know that Dan was Gossip Girl by simply giving him a diploma.

Confession, the questions on every graduates mind is “who will take the cure?” Am I right? Or maybe that was just the case in Mystic Falls. Throw in dead people coming back, a love triangle resolved and some character deaths sticking and you’ve got a Mystic Falls graduation.

Nothing kills the celebratory vibe like your best friend getting falsely arrested for murder. Toss in the reunion of Logan and Veronica along with the bus killer reveal and you’re graduating from Neptune high.

Rory graduated and made the Valedictorian speech all about her mom. In real life, awkward, on television still kind of awkward. But when your mom and best friend is Lorelai, we’re not complaining.

Watching the seniors walk down the halls in their gowns was a hard scene to take in. Especially when you realized thought it was the last time you’d see them at McKinley High (SPOILER ALERT: They’d be back). Pair it up with them getting their diplomas while “Glory Days” plays and you’ve got a musical graduation that only Ryan Murphy could dream up. 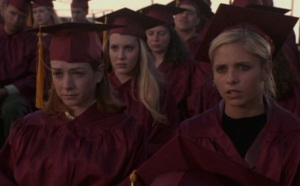 Everyone says to go out with a bang when you graduate, well Buffy did just that. Where else but Sunnydale is the mayor a demon, students fight vampires on graduation day and you blow up the school to stop said demon mayor?

The O.C gave us one of the closest to real life graduation ceremonies. Chock full of emotional speeches, beautiful weather, parents tearing up in the audience and leis, oh so many leis.

Did your favorite make the list? Did I miss any Grads? Sound off in the comments below! 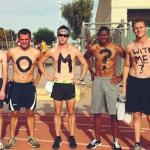 Why I Hate Snapchat