Instead of sending out a traditional graduation announcement, this Utah Valley University student (or should I say alumni), Kayla North, let her family and friends know the real deal. She didn’t sugar coat anything or pretend to be happy that she graduated. She simply stated the facts: I graduated college. Now I am sad, unemployed, and poor… just like everyone else. 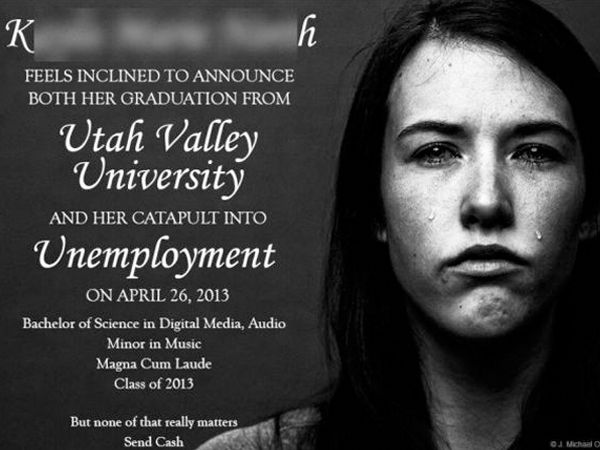 After posting it on Reddit, the announcement got a lot of buzz. Some people said it was hilarious. Some said it was sad, but true. And others said it was pathetic and just plain wrong. Those people said she should have majored in something else such as ‘nursing’ or ‘engineering.’ They also said she is begging for money.

First of all, just because you go to school for a major such as ‘nursing’ or ‘engineering’ doesn’t mean you will automatically come out of school with a job. Sure, your chances of getting a job are higher than a communication major’s, but no college degree (cough piece of paper cough) guarantees you a job right out of school. Even people who go to great law schools can have a hard time finding a job. It’s not an easy world out there… especially for people with no (professional) experience.

Second, why major in something just because there are a lot of jobs in the field? If you go to school for something simply for the fact that you have an 80% chance of getting a job after graduation, and it ‘pays well,’ are you going to happy the rest of your life? Are you going to be good at your job without the passion? Sure you’ll be making good money, but are you going to keep advancing in your field and making even more money without a love of what you’re doing? If you’re really into finance or engineering — good for you. But if you’re not, and you fucking love tweeting, then tweet for a living! It might take time to find a job as a professional tweeter, but eventually you will… and it might take time to start making good money, but eventually you will. Not to mention – you’ll probably be good at doing something you love. You’ll probably spend extra time working if you love what you’re doing. And in return, you’ll probably end up being wildly successful if you love what you’re doing. Money doesn’t buy happiness. But happiness (at work) can (eventually) buy you money.

Third, she is not begging for money. She is simply sending a funny message to family and friends, who were probably going to send her cash anyway. She didn’t post this picture to Reddit to ask randoms all over the world for cash (she blurred out her name). She sent it to, like, her grandparents and aunts and uncles… You know — the people who would send a graduation present whether they got an announcement or not. At least her family now knows not to go out and buy her anything… but to send cash instead. Like, props to her for being brutally honest. As for everyone who wouldn’t have sent her a present in the first place, they’re not going to send money to her now just because she wrote ‘send cash’ at the bottom of her card. They’re just going to laugh… and maybe cringe at the same time for themselves or their children (or their future children) because this is kind of the way life is now.

Kayla’s announcement was (and is) supposed to be a satire on life after college. And that it is. When she says ‘none of that really matters’ right now about her degree, it’s sadly kind of true. Just as getting into college is becoming more competitive (and expensive), getting a job thereafter has become more competitive as well. You have to do tons of internships (starting in, like, high school) — and a lot of students don’t have the money or time to work in addition to taking classes and participating in activities… especially when they’re not getting paid for it. So when they graduate college, not only are job openings far and few between, but any prospective job is going to be extremely hard to get unless you get lucky and, for instance, a position opens up at the company you just interned at… or you know someone.

For someone who just graduated from school with a degree in digital media, putting this card online was basically genius. Sure, she’s unemployed now, but soon enough I’m sure she will get a job because she created a satirical graphic which showcased her sense of humor and writing ability and made it go viral. She was on Fox News this morning talking about it… and before that was on a local Fox affiliate in Utah talking about it. I think this girl rocks. What about you?

The 35 Best Emojis… And What They Mean

Can You Have Too Many Best Friends?