Over the years we’ve watched you grow up. In The Parent Trap, we watched you play two people while sabotaging both an overnight camp cabin and a marriage. You were so adorable and cute… We had a hard time deciding which ‘twins-at-camp’ movie we liked better: It Takes Two or yours (I chose yours).

As the years passed, you grew boobs and got hot. You played guitar and sang in the remake of Freaky Friday, which made me go out and buy a guitar too. I made my parents pay for lessons and gave up after about four classes when I realized I sucked. You played a ‘regulation hottie’ in Tina Fey’s Mean Girls – which I still watch on a regular basis today thanks to E!. I even had a poster of you in my room. Weird, but whatever. You were, like, so cool. Girls wanted to be you and guys wanted to be on you.

Once you tried to start a music career, that was the beginning of the end. I mean, your songs were horrible. Rumors? That song sucked. But you didn’t stop there. I mean I’m sorry that your parents got divorced and your dad turned cray, but your rebellion should have been in the form of something else other than sh*tty straight to DVD movies and extreme partying. Maybe if you weren’t an A-lister… but you were (and still are? maybe?)… so that was prob a bad idea.

After doing a ton of coke, getting way too many DUIs, becoming deathly thin, dying your hair blonde, and attending rehab that clearly didn’t work, you became even more of a mess. But how? Do you know how many young girls idolized you once upon a time?! Do you even know? What happened to the girl in The Parent Trap?

You next got caught doing drugs on probation and went to some treatment place that, again, didn’t work. Then you stole jewelry because you obv didn’t have the money to buy it (really LiLo? really?!?!). Then, as we all think you’re going to get what you deserve with a 120 day jail sentence, you spend like maybe 5 hours in there due to ‘overcrowding’ AKA you’re famous and have a lot of money. Boo hoo. 5 hours in jail? I feel so bad for you… Not.

Now you’re on probation (are you always on probation?) and are ‘not drinking.’ However, your first venture post-stealing was posing naked in Playboy. Classy. That really made us believe you’ve changed. Or did it?

Unfortunately your days of being an actress are over. You were never a good actress. You were just cute when you were little and hot when you were a teen. But now you’re not good looking, so you don’t have that going for you. Although if you gained some weight, did something with your hair (like dye it red again – everyone loves a good ginger), and umm started acting normal maybe you would be. Maybe your good looks and normalness would help you out. I mean, look at Emma Stone. She looks like you with blonde hair. She just is normal and therefore stole your career (aka The Help).

The Olsen twins came back from bad times. The only difference is they decided to stop acting. They didn’t try to be Elizabeth Taylor on a Lifetime movie, which is actually a horrible idea Linds. They just do fashion. And you should too. After you do something with your hair.

So please Lindsay take our advice. You now have FOUR years left as a twentysomething. Don’t enter your thirties as a f*ck up. Become normal again (or as normal as a celeb can be). It’s really not that bad. 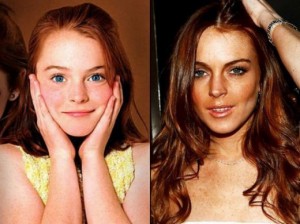