**Each day this week we are featuring posts from 20-somethings who did something other than work a 9-5 after college. If this sounds like you and would like to write about your experience and/or the pros and cons of doing what you did, please send us an email at forevertwentysomethings@gmail.com. Thanks & happy reading!**

Everyone knows one. Whether it’s your own or a friend’s, you know one. It’s that guy you come back to every so often because it was comfortable and filled some sort of void for the time being. The one you’d always say, “Oh, there’s no way I’m calling him again,” but yet every few months, there you were with him again, complaining to your friends why he would never make a good permanent boyfriend. And then your cousin has to go and get married so you end up having no other options but bringing him to the wedding. Sound familiar?

This never actually happened to me with a guy, per se, but instead with my summer job since I was 16. It was a glorious starting job: the local ice cream shop. 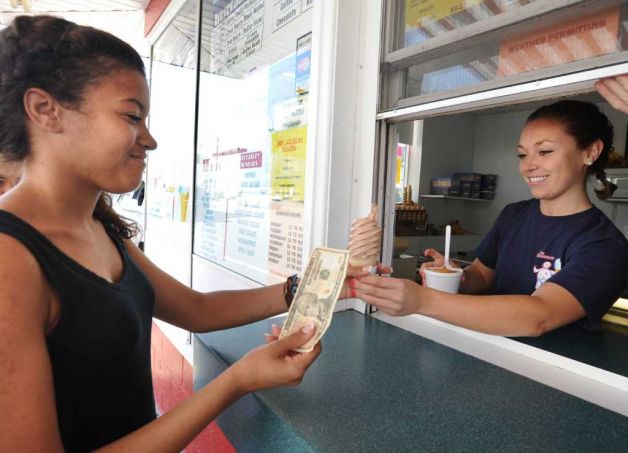 It was a buzzing hotspot in the summer. I was in poms in high school, so with the shop being closed in the winter during the competitive season, it worked out perfectly. Plus, I worked with some of my best friends, and the minimum wage seemed like golden riches to me because I could finally afford that overpriced Hollister jean skirt my mom wouldn’t buy for me.

However, once I got into my college years, the annoyance of the job started to outweigh the convenience of maintaining an easy summer job that gave me a small wage increase each season I returned. The high schoolers’ complaints of prom date drama and not getting invited to the baseball star’s bonfire were simply more than I could handle, leading me to proclaim that, “NEXT summer, I’ll totally, like, bartend or something.”

It never happened. As I entered my senior year of college in 2010, I said goodbye to my first and constant job, knowing that by the following summer I’d have a degree and boom — instant full-time job.

No such luck. When they say the journalism industry is tough right now, they aren’t lying. I applied everywhere my qualifications were (and weren’t) applicable in the city of Chicago and surrounding ‘burbs before I graduated in May 2011. I went out on a limb and applied to some out-of-state positions (aka NYC aka my dream), even though I knew that my bank account would only permit me to live in my pink-and-orange room in my parents’ house at the moment. I had a few bites, interviewed at some places that were not close to anything I wanted to do. And then it hit me. I’m going back to the ice cream shop because I’m dirt poor and can’t find a job.

Panic slightly ensued, but thankfully my boss, who I had grown to be great friends with, promoted me to manager (read: PAY RAISE!) and took me back in with open arms.

Slowly, though, all my friends got full-time, Monday through Friday, 9-5 jobs. That meant their open weekends were filling up with plans like baseball games and birthday celebrations, but being the only other manager at the local ice cream joint meant that at some point, I’d be sacrificing large chunks of my weekend to work.

But it was fine, because listening to the juniors in high school talk about getting in trouble for dress codes and applying for colleges while getting all of their stats wrong was my ideal way to spend my time. (On a serious note, it was quite interesting telling them personal college stories and seeing their eyes get wide in anticipation of their similar, inevitable future embarrassing moments. Don’t get me wrong, these younger girls would make me laugh and could be more mature than my best friends at times).

It was also really uplifting to see people from my graduating class in high school who know I just graduated from a decent university (how cruel Facebook can be), but yet I was still working at the place they’d seen me work at since I was 16… I’d explain my situation sometimes, but I learned to stay in the back and make the high schoolers take over when I saw someone I knew. Sigh.

Thankfully, I eventually landed a paid internship at the pop culture- and entertainment-based commuter publication in Chicago in August, so I split my time between that and working at the ice cream shop. By the time it closed for 2011 in November, I was ready to truly wave goodbye to the place that I could never fully leave. I had been freelancing here and there for a company in my hometown that owns seven area newspapers, and by the time my internship was over mid-December, I had landed a full-time gig as an assistant editor for two of those newspapers, which is where I currently am still working.

So it happens. You may not land a full-time job right after you graduate. You may not even get one within the year after you graduate. And yes, you may have to go back to your local ice cream shop, mall job, waitressing gig, or other position you thought you wouldn’t have to work at because you’d have the golden ticket: a degree! Because let’s face reality here, whatever you’re reading in the paper (perhaps written by yours truly) about the economy sucking and how it’s hard for recent grads to find jobs is unfortunately true. I don’t regret going back to the ice cream shop, and I’m actually very lucky I had something to fall back on while I gained some footing in the professional world. It’s about getting creative and exploring other outlets to pay the bills. Or in my case, paying for the occasional box of cereal (you’re welcome, Mom!)

The ‘Reply All’ That Ended It All