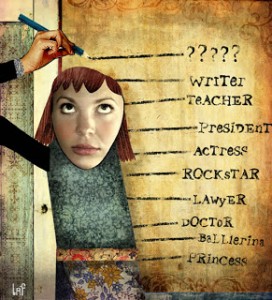 Growing up, I always envied the kids who answered the oft-asked question “What do you want to be when you grow up.”

The answers these kids produced varied—engineer, veterinarian, lawyer, et cetera—but the point behind them always made my skin crawl. These kids knew what they wanted to do with their lives. I didn’t. These kids had a plan. I didn’t. I liked writing, but everyone knows that’s not a “viable career” so I abandoned and ignored it.

I remember a talk I had with my guidance counselor in eighth grade. I had just taken a career aptitude test and he called me to his office to discuss the results. I was so hoping that the test would tell me exactly what career path to pursue so I could have a plan in life, so I could have a goal, a dream. But the opposite happened.

“With these test results, you could really do anything you want,” he told me. I sighed.

“At least my mom packed an extra fruit rollup in my lunch,” I thought. So I finished the rest of middle school and the rest of high school without any aspirations. I couldn’t figure out what to do I did well in all courses, but the only ones I enjoyed were history. Thus, in college, I majored in history and hoped to go onto graduate school to become a professor/historian. I failed.

Fortunately, around the time I graduated from college with my useless degree (and it wasn’t useless just because it was a history degree; virtually all non-STEM degrees are just pricey pieces of paper), I had started writing about MMA for Bleacher Report. I started getting paid for it not long after graduation, then I started writing for other, non-MMA sites like Thought Catalog, BuzzFeed and, of course, Forever Twentysomethings.

I graduated in 2011, so this all happened about two years ago. To someone who isn’t nuanced, what I’ve done might sound impressive. But it’s not. I didn’t have the benefit of knowing early on that I wanted to write on the Internet professionally. I didn’t get to intern at prestigious websites in college, I didn’t get to write while I only had to work part time, as well as a slew of other benefits. And because I chose my career path later on, I can’t apply for a recent phenomenon—post-graduation internships—in my field because I graduated too long ago. This dubious honor extends beyond the writing world, though. Take the Thiel Fellowship, for example. It has an incredible, important goal and purpose—empowering people to do what they want without the unnecessary baggage of a traditional college education—but it’s only for people under 20 years old. If you haven’t decided what you wanted to do by then, I guess you’re fucked. How is that fair?

I can only imagine what it’s like for people who decided on a career path even later than in their 20s. How can they compete with someone who knew what they wanted to be from five years old, and spent every year of their life working towards it, with parents who helped them every step of the way?

This all sounds like one big complaint, and I suppose it is. It’s just so horrible that we’re expected to know what career we want when the most real world experience we have is high school. And if you don’t know what you want by the time you have to go to college? Fuck you—go get some shitty sales job somewhere, or at least that’s society’s attitude. 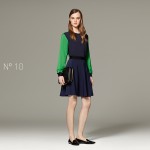 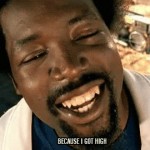