OMG it really may be the most dramatic Bachelor ever! Chris Harrison is with a live audience and tells us Lauren and JoJo’s families + Ben’s hometown pastor are here, because Ben is getting married TONIGHT. WHAAATTTT?!

We head back to Jamaica where Ben is faced with the tough decision of choosing Lauren or JoJo. I think what he really wants is to have a pair of sister wives and just choose them both. But, I don’t think his pastor would go for that kind of wedding. He tells his parents he is in love with two women and Ben’s mom says she is very disturbed. 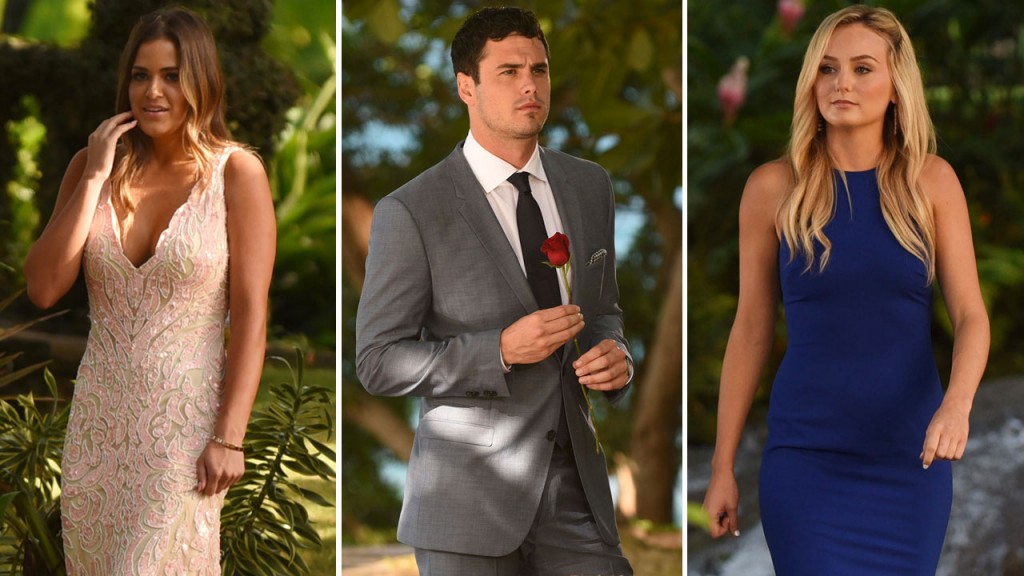 Lauren meets the parents first. She asks if he truly is perfect, and his mom says that Ben has a tendency to get worked up and you have to talk him off the ledge. What does that mean? Should we be concerned that he is emotionally unstable and on the verge of making the “biggest decision of his life.” Everything with Lauren feels very surface level and falls a little flat for me.

Before departing, Lauren tells Ben she is so ready to get engaged and married. And Ben is looking hella torn up about his predicament.

Next is JoJo’s turn to meet mom and dad and Ben awkwardly tells his parents that when they took a helicopter ride over the Hoover Dam they didn’t really see much of it. Wink, wink. Really, Ben??

JoJo gets emotional talking with both parents about how much she loves him. They ask the tough questions and JoJo is perfect, but very real and honest. And they’re completely smitten by her. Jo and Ben discuss their feelings of love towards each other and the looming proposal.

Watching it, I’d say JoJo’s date went better, though his parents are too diplomatic to say that. She was totally in sync with both parents and they seemed to love her as much as Ben does. The parents say they could see either as his wife – which is clearly no help to their son.

This really has been the most honest season. Both ladies lay it all out there and tell Ben exactly what they want. Maybe its because they’ve already heard the ILY from Ben so they’re comfortable? Either way I love the confidence and assertiveness.

Lauren and Ben have their last one-on-one date and she asks if he has any doubts. He says it’s all been too perfect, and maybe that’s a sign it is too good to be true. He’s concerned he doesn’t know what things would be like when life gets hard with Lauren. Does this mean Leah was right and Lauren is a little too fake and perfect with Ben???? On the evening portion of the date, she’s wearing a gorgeous LBD and he has on a hoodie. It’s a good thing he’s hot.

Things start to get deep and for a minute it seems like Ben might be trying to break up with her. He does the “you’re the best thing ever, but…” In her interview she says she’s starting to realize he may be in love with JoJo too. She says she is suddenly not so sure he’ll pick her. Producer editing or is something else going on?

Baaaaaabe. She keeps calling him babe and it’s kind of driving me crazy. However, I really love JoJo. They go to another waterfall/body of water and makeout in bathing suits a lot. They talk about what a future long distance relationship would be like and he tells her he loves her, but is conflicted. Much like Lauren, JoJo starts freaking out.

On the evening date, Ben dons a slightly more dressy v-neck. Has he been this casual all season and I’m just now noticing? JoJo asks what about the relationship he is doubting. He says nothing and that’s the problem. He tells her he feels the closest to her and is the most himself. They go into the bathroom to get away from the cameras and we see the voiceovers we’ve been seeing on previews the last few weeks and IDK, but I am actually freaking out. JoJo asks if he is also in love with Lauren and he (of course) says yes. She says she feels like a fool and his “I love you” is no longer as meaningful. They both cry and continue to feel confused. 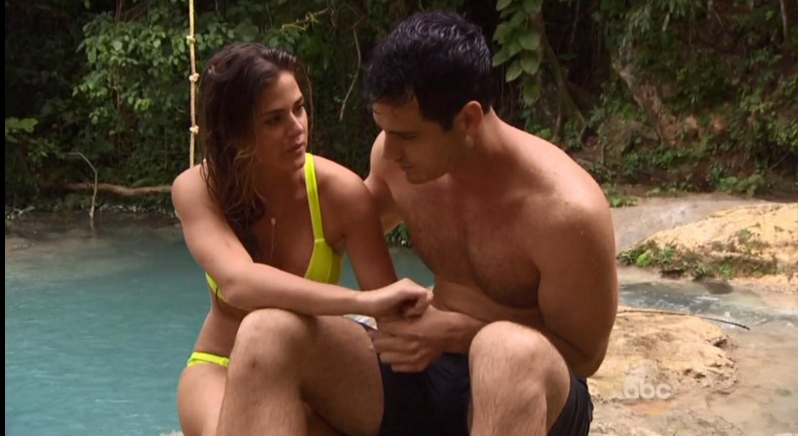 I may have had a few glasses of wine, but I am sobbing at this point. Although Ben indicates this will be incredibly difficult and he has no idea who he’ll choose, he meets with Neil Lane to pick out a ring. And finally, he says he has a moment of clarity and knows who it is. He puts his suit on and is looking dapper as hell ready to propose.

This is it. Who is first out of the limo? NOOOOOOOOOO. It is JoJo. He tells her how gorgeous she is and lets her spill her heart out to him and then he shatters it. He tells her he found love with her, but he loves someone else more. She’s clearly very blindsided and didn’t expect this. And how the hell is he going to turn around and propose after this? More so, how does Chris Harrison not feel like the biggest asshole of all time for just greeting these women to their walk to heartbreak?

Ben gets over his broken heart quickly and calls Lauren’s dad to ask for her hand in marriage. They both say a lot of nice things to each other and he gets on bended knee and proposes.

JoJo is absolute perfection in every way. Damnit if Ben won’t marry her, I will. She says watching it back helped her realize he did love Lauren more. And she is not giving us any crazy-ex girlfriend and is just perfectly poised and seemingly moved on. Chris asks how she feels now and she says Ben holds a place in her heart but she has moved on and found peace. Maybe she’s with her ex? A new man? No man and just totally killing it on her own?

Lauren tells us while still in Jamaica Ben told her everything that happened, so she wasn’t shocked watching it back. She wasn’t completely surpised he was in love JoJo, because let’s be honest, that’s just the kind of guy Ben is.

Lauren says she’s moving to Denver and wants a short engagement, but needs time to date Ben. Then Jimmy Kimmel interrupts to demonstrate with a naked barbie what happens in the fantasy suite. I’m betting this was all a marketing ploy to get us to watch ATFR and there is no wedding. 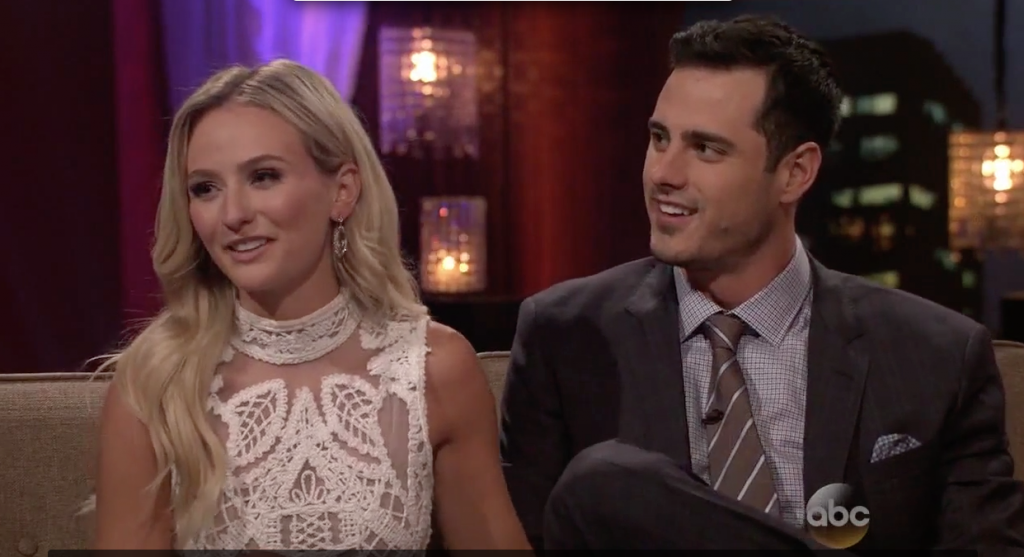 Chris tells Ben pastor Denny is here and puts him on the spot to get married tonight. Ben says, no they need more time and a real wedding, but he throws us a bone and re-proposes to Lauren. Lame. My eyes are rolling so hard I’m concerned they may come out of my head.

Another season in the books for the Bachelor. For me it ended pretty happy, because Ben is always adorable and JoJo gets her chance as the next Bachelorette. 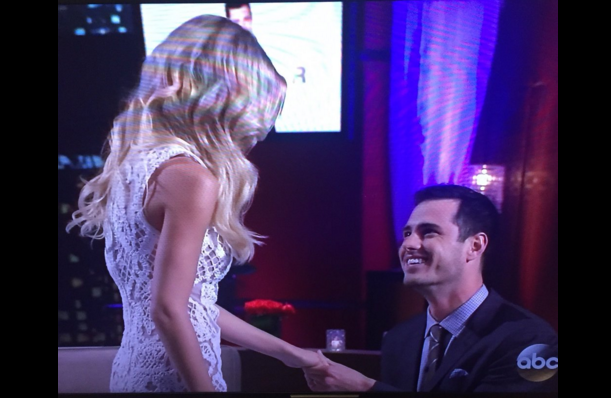 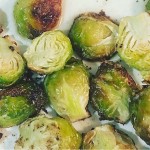 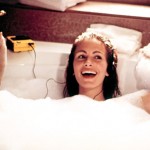 7 Times Julia Roberts Was A Liar