I took Marathon Monday off of work this year because the roads I take to work were going to be closed… and (mostly) because I wanted to participate in the fun I’d heard about for years while away at college in New York. I woke up early, made a salad for the cookout I was going to (an attempt to be healthy — it failed), bought a bottle of champagne, and stepped outside for a day of fun with friends… and to drink bottomless mimosas out of a Styrofoam cup while watching really athletic people run down Beacon Street. 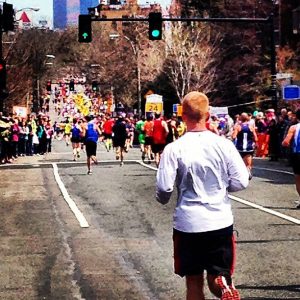 We had gone back to my friend’s apartment at one point to grill burgers and hot dogs for lunch when I got a text from a friend that a bomb had gone off and the marathon had stopped. I then got a second text that there was another bomb. No one believed me at first because… a bomb… in Boston? That’s crazy talk. I didn’t even believe myself. But it was true.

Seconds later, the helicopters and sirens started and we knew something was going on. Immediately, I checked Twitter to see what was happening – but no one knew yet. I then texted everyone I knew that was in the finish line area — or may have been in that area — to see if they were safe. Luckily they were. But then I saw an image that I will never forget. Boylston Street covered in blood with people lying scattered on the ground. An image I never thought I would see in my city. On a street I’ve roamed far too many times. Not everyone was okay. At all.

The rest of the day was spent in front of the TV frantically texting, checking social media, and trying (and failing) to make outgoing calls. There were reports of unexploded bombs all over the area and a possible bomb at the JFK library. No one knew what was going on. Confusion was at an all time high. Some people were let out of work downtown, while others were kept in lock down. For those let out of work and those stranded after coming into Boston to watch or run the famous marathon, part of the T was closed so most had to walk miles home or — if they couldn’t walk home — to areas they felt were safer. No one knew what or where was safe, though.

The next day, I arrived to work to see four different newspapers each with headlines I couldn’t believe. Never did I ever think I would I would see the word ‘bombing’ next to the word ‘Boston.’ But there it was in big, bold, black letters.There had been a bombing in my city two miles or so from my apartment.

When I think of bombings, I picture countries far far away from mine. And while I think it’s crazy that a bombing has occurred in my very own city, do others? Are people getting used to seeing news of deadly events in America? There certainly have been a growing number of public shootings recently. And now bombings on a familiar street? Are we becoming a country that ‘things like this’ happen in? A friend was talking with a woman from Australia the other day who said she was happy to be going home soon because things like this don’t happen where she’s from. But things like this don’t happen here either! Right? Wrong. They do happen here.

But they can happen anywhere.

Our country is not a scary a place. The world is a scary place. But that’s life. And we can’t stop living just because such events have made us afraid to do anything or go anywhere. Instead, we need to throw our fears out the window and live life to fullest while we still can. That’s the message I took home with me after Monday’s attacks. I wasn’t afraid anymore. I was inspired by seeing people run into the bombed area to help those who were injured. I was inspired by those who ran right through the finish line all the way to the hospital to give blood. I was inspired by the New York Yankees who played Sweet Caroline at a game to honor us – the enemy. I was inspired by the entire crowd singing the National Anthem at Wednesday night’s Bruins game.

What the people who cause these events don’t realize is that by hurting us, they are only making us stronger. They are making us more willing to take chances. They are making us more united. They are making us realize that life is a beautiful thing and we need to live it up as much as we possibly can. Anything can happen at any time — and all we can do now is come together as one. 8-year-old Martin Richard, whose life was taken far too soon in the attacks, once wrote: No more hurting people. Peace. 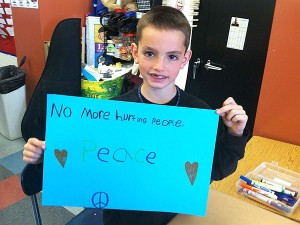 Let’s stand together for him.

Lets stand together for Krystle Campbell and Lu Lingzi. Let’s stand together for all those who were injured and those whose lives have been forever changed. Let’s come together and stop the violence and the fear. We are #BostonStrong. We’re going to get through this. We already are! 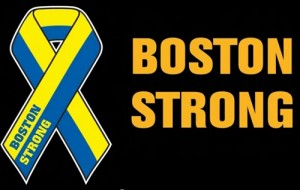 Marathon Monday and Patriots Day may never be the same, but they will hold a greater meaning now. People can try and destroy our city, our state, our country — but they won’t take away our pride. From now on, like always, we will stand strong for not only Boston, but the entire country — the entire world. And while doing so, we need to remember not to fear — but instead to love and live.

As Obama said during his speech today at the interfaith service held in Boston, ‘We may be momentarily knocked off our feet, but we will pick ourselves up. We will keep going. We will finish the race.‘ And we will.

There are a number of ways you can help the victims and families of the Marathon bombings and the city of Boston in general. Check out Boston.com’s list of how to help here.

Boston Marathon Bombing Suspects: Pictures, Video Footage, & Everything Else We Know So Far