We aspired to be great people but wound up sweeping floors and serving coffee.

It wasn’t supposed to be like this. From birth, we were told how our lives were supposed to play out. We would go to elementary school and learn to read, write and do arithmetic. We would then go to middle school in order to prepare us for high school. High school would, in turn, prepare us for college—and if we took this preparation seriously an elite university was undoubtedly in our future. If we worked hard enough at this university, our straight A’s would turn into a wondrous career that enabled us to retire at 65 and enjoy the rest of our days in contented bliss.

This was wrong. Getting straight A’s didn’t make us accomplished professionals, it made us a generation of suckers.  Jumping through meaningless academic hoops earned us a piece of paper, some memories, and debt. The prophecy that only good things would come from a college degree was no more accurate than Harold Camping’s prediction that the world would end in 2011.  The fulfilling careers that we were “destined” to have if we obtained a degree were a lie—a bigger lie than the cake.

Thus, when we graduated, the majority of us faced four paths: 1. Unemployment 2. Graduate school and (more) debt 3. Getting a “real” job that we hated (barista, retail, clerk, insurance salesman, etc.) 4. An internship, usually unpaid.

According to a recent article by Hannah Seligson that appeared on The Week, most Millennials are choosing the last option: internships.

Seligson spoke to one woman named Kate who had a degree from an Ivy League school. Kate had been an intern for a year and a half and still couldn’t find full-time work. She was, in her own words, “an intelligent, hard-working person” yet she still had to work as a hostess to make ends meet.

This sob story isn’t unique to Kate. Millions of recent graduates are experiencing this struggle, as Seligson pointed out:

She’s one of the “permaterns” — those perpetual interns, mostly in their 20s — who have been battered by the recession and are holding out hope that the conventional career wisdom that an internship leads to a job isn’t folklore from a bygone era.

The serial intern isn’t unique to D.C. You can find young people languishing at film studios in Los Angeles and magazine empires in New York City. The permatern phenomenon points toward wider trends in the economy — namely the cutthroat competition for knowledge-economy jobs, the lack of investment in this generation, and the skills gap between what a generation weaned on a liberal-arts education is trained for and what the in-demand skills and professions are right now (i.e., not another poli-sci or English major). The result? For many in Washington, the American dream starts with a highbrow internship that pays $4.35 an hour — then another, and maybe another.

These circumstances are imponderably bad for recent graduates. Unfortunately, they’re not going anywhere. The job climate for young graduates will likely stay this way? Why should companies start paying more when there’s a veritable army of aspiring [insert career] that would sacrifice their reproductive organs for a six month internship somewhere? If you recently graduated or are about to, the time for action has past. You can’t prevent something that happened already. The problem won’t be solved nor will it solve itself fast enough for you to be saved from financial and professional hardships. All you can do now is persist. You must endure, we all must endure.

To use my own life as an example, I graduated with a history degree. I wanted to be a professor and I applied to several graduate programs. I was only accepted by two. Neither of them offered funding. Fortunately, I crafted a backup plan, albeit a shaky one. I started writing about MMA (mixed martial arts)  for the sports media website Bleacher Report a few months before graduation.

“If I don’t get into graduate school, I’ll put all my resources behind MMA-writing,” I told myself. When I put graduate school aside and started writing in earnest, I procured a contract with Bleacher Report only a month and a half after graduation. Eventually, I earned an administrative position there which I held for a year before it was eliminated due to restructuring. Alas, I’m back at square one. Yet I’m still persisting. I’m still writing, still applying to internships at places I’d like to work. Just so, I urge that all of you continue persisting in this execrable climate we find ourselves in.

The silver lining of our plight is that future generations don’t have to suffer the same slings and arrows of outrageous fortune. High school students applying to college today know to intern as often as possible when they get to college. This will give them valuable experience in a job market where entry level jobs are entry level in name only. Most “entry level” job listings require experience in the given field, sometimes up to 2-3 years’ worth! Taking on as many internships as possible in college will help them create a network of connections and build up crucial experience while they’re insulated from paying off student loans and other financial stressors.

Strangely enough, there’s a Victorian era saying that applies to the crossroads faced by recent graduates and those entering college within the next few years: “In Berlin the situation is serious but not desperate; in Vienna, the situation is desperate but not serious.”

For people who have yet to attend college but are soon going to, the situation is serious but not desperate. They’re reading all the negative news, opinions, and statistics about college but they can be hopeful of a better tomorrow because A. they don’t have to make the same mistakes their predecessors did and B. the economy might improve.

However, for people who have already graduated, the situation is desperate but not serious. Economic and occupational malaise has made them grim and fatalistic about the future. Nevertheless, they do not forsake enjoying life’s sweeter things. Even the broke and broken Hannah Horvath indulged in some booty calls and cupcake or two. 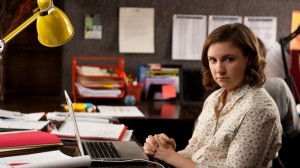 Throwback Thursday: Nick at Nite (We Really Are That Old!)