I actually just received a “Happy Hannukah” email at work (That’s what happens when you work in television I guess). However, I’m at work… receiving this email. If today was actually Christmas, no one would be sending “Merry Christmas” emails at work. No one would be at work.

Christmas is like the ultimate holiday. And it has clearly been taken over by the media (aka Jews because we love working in media and television). So what’s a Jew to do on Christmas? Celebrate! We get together with family because everyone else we know is with theirs, lounge because we don’t have work, eat Chinese food or go to a Catholic relative’s house (because let’s face it – we all have at least one Catholic relative now), and give and get presents.

If you’re still not sure how to survive Christmas as a Jew who isn’t crazy religious, we have you covered… Here is how to celebrate a non-religious Jewish Christmas:

1. At work, let people know you are Jewish… and celebrate Christmas. Although they may give you a weird look and not understand, this is better than the awkward “Happy Hannukah” they will tell you sometime during the 8 days… and the awkward “Happy Holidays” they will tell you before Christmas. Please – just tell us “Merry Christmas.” We are not opposed to the holiday. And everyone else who doesn’t know we’re Jewish automatically says it anyway.

2. When you talk about going gift shopping, just say you’re going Christmas shopping. You know you’re not going to give your presents out until Christmas, so why pretend? For a while, I said I was “Chrismukkah” shopping… but every time I said that, I would get the “Wait – Aren’t both your parents Jewish?” or “So you’re, like, 2 religions?” Hmm… Both my parents are Jewish. I’m Jewish. I’m not religious. And since the rest of the world gets together with their families and gives presents on Christmas, I’m going to do that too. There is still school, work, and other activities during Hannukah, so when are people even supposed to get together? Seriously. Hannukah is quickly becoming extinct and is being taking over by Christmas… Just like the dinosaurs were taken over by humans.

3. Do not think of Christmas as a religious holiday. If you’re a super religious person, you have probably stopped reading this by now… but it’s not our fault your holiday has been taken over by mainstream media. Christmas is literally everywhere we go. And we can’t stop listening to the music because it is just so damn good. I mean come on – there are no major menorah lightings in big cities… but there are tree lightings! And how do you think Jewish children feel when Santa goes to their friends’ homes with gifts, but not theirs? Well, actually, Santa came to my house when I was younger. Why I didn’t question the fact that Santa came to my house even though I was Jewish… I have no idea. But anyway, do you really expect us not to give in? You make it so easy.

4. Embrace the Christmas party. Do you ever notice people changing the word “Holiday” into “Christmas” subconsciously? Like, if your work is having a “holiday party,” you start calling it a “Christmas party” or you hear your peers calling it a “Christmas party.” In college, people had holiday parties all throughout December every day of the week. At these “holiday parties,” people would dress up. But no one would wear blue and white (Hannukah colors – yes, there are colors)… Everyone would wear red or green, Santa hats, ugly Christmas sweaters (there are no “ugly Hannukah sweaters), and whatever other Christmas themed apparel they could fine. This was amusing, especially for me, because at almost every expensive private school, Jews are everywhere. But all the Jews gave into the Christmas spirit at college – No matter how involved with Hillel they were or how many times they went to Israel. 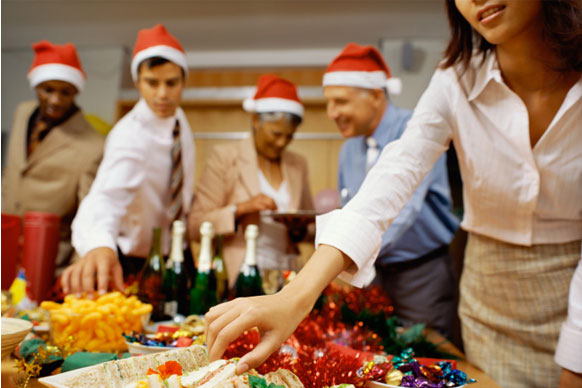 5. Be happy you get the best of both worlds – Chrismukkah! Thanks to mainstream media, Christmas is now a day where non-religious people and people of other religions can get together with family and exchange gifts. And thanks to Seth Cohen, Chrismukkah – a very long period of holiday fun – was created. So now you’ve got this long ass holiday… and all the other non Jews have one holiday – Christmas. The world forces us to acknowledge and celebrate Christmas by closing every store and workplace (except hospitals and television stations)… but the world certainly doesn’t force anyone else to embrace Hannukah. And that’s fine with us! 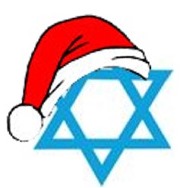 The next time you get upset because Christmas decor is taking over your local Target and you can’t find one single menorah, follow the above steps and learn to embrace Christmas (minus the religious aspect).