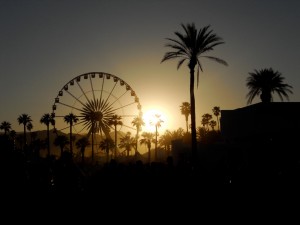 I have to admit that I am guilty of having had an unprecedented and uneducated judgment of Coachella.  I just figured that since it tended to feature mostly artists I had never heard of, that obviously it was something solely meant for hipsters.  And despite having been convinced to go by some friends, I was still slightly skeptical on going since I am basically the opposite of a hipster.  I thought, if this is meant for hipsters, would it really be something that I could enjoy?  Well, the answer: hell yes.

Of course there were plenty of hipsters present but so were pretty much every age and type of person you could think of.  You had the hipsters, the beefy fratty looking guys, the over-the-top loud and screaming groups of girls, the punks, the foreigners sporting their flags as capes, the mobs of 13-year-olds still in braces, the hip grandmas and grandpas, and the little rocker families.  Just like the cafeteria in Mean Girls, every group was properly represented at Coachella and this left you with a feeling that no matter whom you were, you fit in there.  And let’s be real, there were some outlandish types there as well but in the end no one really cared because we were there to enjoy the music, atmosphere, and our friends.

Although, that didn’t stop me from judging some of the outfits that girls were wearing. (Newsflash people, putting a sticker on your boob and calling it fashion is not exactly acceptable).  Ok, now that I have that little rant out, I can tell you that the go to outfit for most girls this year at Coachella was the high-waisted jean shorts paired with a bra/bikini/bandeau/crop top.  Everywhere you turned, there were girls in this outfit.  However, like all styles, they are not meant for every body type so my little style advice is to focus less on following trends, and more on finding what works best for your own body and going from there.  Not that I can really talk because I just wore whatever I thought was comfortable in the extreme heat, which included sporting a trucker hat…so I am sure that some judgment was passed my way as well.  But whatever, it was Coachella!

And as great as Coachella is, I’m not trying to say that it is some perfect utopian world, because trust me, in my ideal world, I am not using porta potties.  But it is a great experience that I highly suggest for anyone and everyone…well as long as you can handle having questionable hygiene for 4 straight days.  You meet people from all around the world who have come to the California desert to escape the tediousness of real life and embrace good friends, good music, and good times.

So don’t be skeptical like me and think that something isn’t for you if you don’t meet a specific demographic…give it a chance and you won’t regret it.  If you have the opportunity, money, and time to go experience Coachella someday, I highly recommend it.  I am proof that you don’t have to know all the acts performing in order to have an amazing time at Coachella!

Being Happy: I Got A Thing For It