Four years ago, I thought I was in a pretty serious relationship with this guy who turned out to be the greatest of d-bags. After Thanksgiving, he said he needed a little “break” to “find himself” (yeah, we all know where this is going), and I said okay. Then, a week before Christmas, he TEXTED me that he “needed to be alone for a while” and that “relationships were not good for him right now.” Mind you, this was on our anniversary. So I took the blow as gracefully as possible and gave him his space. The next day, I find out he’s in a relationship with someone else (BTW, thanks for that, Facebook). So lesson here: Don’t do it this way.

Hint #2: Don’t be like Kate Winslet in The Holiday before she meets Jack Black.

If I had any sort of confidence, courage, or self-respect during my sophomore year of college, trust me that things would have played out very differently. For starters, I would’ve ended the relationship myself (like I kind of wanted to for a while). I also wouldn’t have been a total ass about it.

That’s despicable and cruel. Pick a day that you know has no sentimental value whatsoever.

Tip #2: Do it at least two weeks before Christmas/Hanukah/Ramadan/NYE etc.

Granted, any break-up in the month of December is going to suck, but if you give the person a nice grace period, their holiday won’t be totally ruined and miserable. (Unless you’re me, who was a mess for a month before I could confidently say “screw you, asshole”)

Don’t be a coward. Text/email/Facebook/social media break-ups are disrespectful and NOT CLASSY. It’s bad enough you’re getting ready to break their heart during the alleged “most wonderful time of the year.” Save them some frustration and be an adult about it. If you must, at very least CALL them. Yes, on the telephone with your voice.

Tip #4:  Try not to make social media posts about your new love interest.

Let’s face it, people. Most of us who are cruel enough to break up someone right before Christmas are doing it because there’s some new guy or gal that’s caught our attention and is probably going to make an appearance on the celebrated holiday. We can’t have those two meeting.

Don’t rub salt in the wound. Texting them “Hey! Merry Christmas! Hope you have a great holiday, friend!” That’s just brutal. Reminding someone that you’ve left their life before the holidays is not nice. Plain and simple.

Tip#6: This is very important: Don’t ever, under any circumstance, say that you want to be friends if you have no intentions of ever being friendly.

Friends like to buy each other presents and celebrate together. Exes generally don’t. Also, the “let’s still be friends” line just gives the dump-ee false hope about rekindling the relationship (I know this from experience).

Tip #7: Please, for the love of all things holy, DO NOT BUY THEM A CHRISTMAS GIFT.

Breaks-ups are best when it’s a clean cut. Jagged gray areas are never fun and always leave someone guessing about your intentions and feelings. Cut the ties loose and get on with your life, so they can get on with theirs.

I hope that, if you’re heartless enough to do this, you’ll at least take my advice. If you’ve been dumped during the holidays, watch out for my next post, coming soon to FTS! 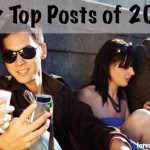