Rejection is no fun, but unfortunately it is a way of life. There are many kinds of rejection:

Notice that all of the above “rejections” almost feel like a break-up… which is part of the most popular rejection… Dating Rejection:

You have all had an experience where you liked someone who didn’t like you back. Regardless of whether it was the third grade and you asked someone “out” on a sticky note – to which you replied he or she replied “no” because, duh, you had cooties. Or you just broke up with your boyfriend of five years after you found out he was sleeping with your best friend. Rejection always hurts.

Just like you said “I will never drink again” after you drank way too much Tequila last night- you probably told yourself “I will never date again” after you got turned down/broken up with. Well, guess what? You get over it. You probably started drinking again a few hours after your hangover passed… And you will start dating again as soon as your “dating hangover” passes. However, since a “dating hangover” is mental – unlike a real hangover – you are the one who decides how long it lasts.

When you’ve fallen for someone, you start to believe that your feelings are totally out of your control. And they sometimes are – but not completely. People say “love makes you do crazy things” – and it SURE does… but that is USUALLY when you are going through a break up or an intense rejection by someone you wanted to be your significant other. 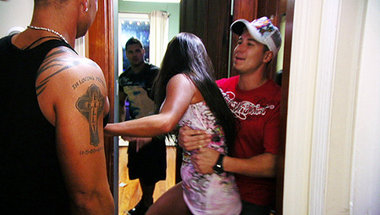 However, no matter which situation it is, they will call you crazy if you show them you’re upset. And the more they call you crazy, the more you will rebel. Unfortunately, your level of “craziness” really depends on how badly the reject-er is treating you. If they’re really mean – here’s what might happen: One phone call a night will turn into fifteen phone calls in a row when they stop answering. You will head to parties just because they are there. You might show up to their apartment in the middle of the night because they won’t answer your calls. And the worst: You may tell them that you want to continue hooking up and talking even though you know they don’t like you… or want to have anything to do with you anymore. All of these things only prove that you are even more crazy than they originally thought.

So what should you do? Move on. Even if you’re not over it, pretend you are. It takes time to get over someone you were just “hooking up” with, and it takes even longer to get over someone you were actually in a relationship with. And yeah, they used to be yours, but do not spend all your time trying to destroy their life as a single person so you don’t have to deal with seeing them with someone else. You should be out finding someone for you so they have to deal with watching you move on. And remember – Even if the person says they still love you – they don’t love you enough to be with you.

What’s the best way to get over it? Hook up with other people. Date other people. Sure, starting new hobbies and staying busy are great ways to avoid thinking about them… but you won’t fully get over someone until you find someone else. And sometimes you have to go through a few relationships/hook ups before you find the one that will actually help you to get over them. Whatever you do, don’t think about getting back together with them – If that’s meant to happen, it will. But your chances will go to sh*t if you act “crazy.” If you’re acting happy, they might be concerned that you aren’t upset over them…

Greetings From The Cape