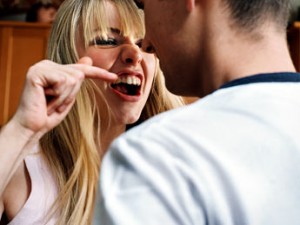 1. Cooking Dinner. Many fights can sprout from cooking dinner. One stemming from the decision of what to cook. You want one thing, they want something else… or neither of you can decide what to have. You then go back and forth about tonight’s entree and BAM it’s after 8pm and you’re both starving. Hello, fight. Another fight happens when one person is doing all the cooking and the other person is doing nothing else to compensate… like cleaning or just helping out in the kitchen once in a while. This usually occurs after ‘the chef’ has had a long day and really doesn’t feel like cooking… Meaning ‘the chef’ will take his or her anger out on their significant other just because they’re there. It never ends.

2. Closet Space. My boyfriend and I live in an apartment with one closet outside the bedroom. Knowing this would be a problem before we moved in, we got him an armoire from Ikea. It works… but he still has some stuff in the closet, and the collection tends to grow because he’s too lazy to put his stuff in the armoire sometimes (ugh). This makes it not my closet. Meaning I don’t open it up and see all my pretty clothes and shoes because a lot of my belongings are hidden behind boy stuff (ugh). The lack of space when you live together, especially in your twenties when you don’t have enough money to afford a lot of space, sparks fights… but eventually you get used to it and learn to deal… and you count down the days (or years) until you’ll be able to afford a 2 bedroom apartment… or a 1 bedroom with two closets. Until then… HANG UP YOUR CLOTHES IN YOUR OWN FREAKING ARMOIRE (sorry boyfriends).

3. Air Conditioning and Heat. Guys are warm and girls are cold. It’s, like, a scientific fact, right? Girls are always so effing cold while guys sweat profusely. Is it because girls shave their legs and therefore their bodies are covered in less hair? Because I have no idea. Whatever the case, this fact will lead to you fighting about whether to 1. turn the AC on or not, 2. turn the heat down or up, or 3. put windows up or leave them down.

4. Loose Papers. The worst. There always seem to be papers, magazines, and envelopes that aren’t mine hanging out allllll over the apartment. Such papers can be defined as a mess. And messes you don’t want to pick up — because you don’t know what should be thrown out or saved — generally starts fights. The worst is when papers that aren’t yours are left on your dresser or night table… but that’s what you get for not having your own bedroom anymore, I guess!

5. TV. Only in a perfect world would two people in a relationship enjoy watching all of the same shows. Sure you will probably have some shows you both love, but there’s no way you won’t have some shows you enjoy that your significant other doesn’t. This is usually found out after scrolling through all the channels and realizing there is nothing on TV right now that you both agree on… you will then fight between Fashion Police or Sports Center… or some boring history channel documentary. Ways to avoid this: 1. Have more than one TV in the apartment. 2. Accept that just because you’re both home at the same time, it doesn’t mean you always to have to hang out in front of the TV together. 3. Get DVR and watch your stuff when the other person isn’t home.

6. Money. Sure, you could just could just split all your grocery, home, toiletry, etc expenses… but this can be impossible at times, like when you have to go shopping by yourself. After spending a ton of money, you claim for a while that your S/O owes you money, but you don’t tell them that in a nice way. In fact, you only bring it up when fighting about other things — which only leads to more fighting! You could switch off weeks you each pay for groceries and stuff, but some weeks you spend more money than others so that doesn’t work. To avoid these problems, you could open a bank account together, but umm no thanks because you’re not married. And even if you did do that, there would still be times when you feel it’s necessary to buy food or something for the apartment that your S/O doesn’t think you need, so you would fight over that too. But the real problem at hand is that you both spend a lot of money… and now you each have none after moving in together… and you’re just taking your poor people problems out on one another. Oh well!

7. Cleaning. If you live or have lived with a significant other, then you know cleaning is the root of many problems. It especially worse if you’re dating a guy. Most guys don’t want to clean. Even if they don’t mind doing it, they’re not going to unless you ask them. But — the problem — you don’t want to have to ask them. They should just be doing it, right?! Wrong. Remember when he used to live with his friends? It was most likely a disast. Even if it was clean, he now has YOU to clean and stuff… You just have to let him know you’re not his mom and he needs to treat you like he would any roommate (male or female). Then, hopefully he’ll start helping out. To try and fight less, instead of yelling, just ask him to help clean first. It might work. If not, cue more fights!

If you have never experienced any of the above fights, someone is lying and/or not speaking up about how they feel and what they like in your relationship. Sometimes not fighting is worse than fighting. However, if you are fighting about the above too much and find it leading to even worse fights — and also notice that fighting is all you do — you might want to reevaluate your relationship. Fighting about the above in addition to having ‘happy time’ together, though, is fine. Moving in together isn’t easy. Like, remember when you shared a room with someone in college? At least you had your own bed then. Now, you share it all! But once you accept and deal with the above issues, the fighting becomes bickering… and it gets easier. And the above seven issues — they never get old.