This weekend, Millionaire Matchmaker Patti Stanger (my girl) got together with a bunch of sexperts (Perez Hilton, Dr. Helen Fisher, Anna Breslaw from Cosmo, and Dr. Emily Morse) for a fun-filled event called #SinglesInAmerica put on by Match.com. Being stuck in Boston, I wasn’t able to attend yet another fab event in my favorite city (someone transplant me to NYC with a job, please)… but they live streamed it so I was able to watch from my favorite place – the couch, maybe or maybe not with a glass of wine. 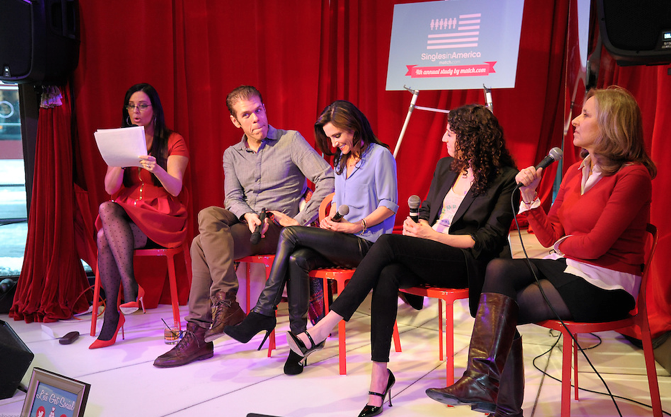 The panel answered many important questions I’ve always had, and backed up their answers with stats. Here’s what I learned and my take on some of their responses:

The best place to meet a date is – surprise, surprise – online! Well duh. We don’t have time to do anything except be online. I wonder if one day Tinder will beat out Match on relationship-making… Only time will tell. As for the worst way to meet someone… a bar! Again, duh. I know I personally wouldn’t want to meet myself out at a bar, so that makes sense. My drunk self can get a little cray.

Don’t start to freak out though if online dating isn’t your thing. 25% of singles still meet people through friends, as opposed to the 31% who meet dates online, so there is hope for the old-fashioned mutual dating thing. Oh, and Perez said the best place for girls to meet straight guys is at gay bars. But, umm, what straight men frequent gay bars? None that I know… OH PEREZ. #SOSILLY

59% of singles think that the date should be planned together. AKA no more old school “the guy should plan the date” thing. Do I agree with this? No, not really. If this was the case my extremely indecisive boyfriend and I (we’re actually the worst) would be on the couch asking “where do you want to go?” on repeat for the rest of our lives. No I don’t think the man should necessarily choose the date, but if someone has an idea they should throw it out there. And if the other person says no, they should have an idea to throw back at them. Planning something together can get awkward when you have no idea what someone likes.

Perez said the first date should be coffee, but Patti said he’s cheap and that if you want romance you should go for dinner because, well, dinner is romance. I agree with Perez about coffee. It’s inexpensive if you don’t like the person. It can be however long you want it to be. And if you figure out you really dig the person, you can splurge on a more expensive date for your next rendezvous. Also, dinner is calories. Coffee is weight loss. Which one would you prefer, ladies?

What’s the first thing you notice on a date?

Perez said punctuality is what he notices first. And 15 minutes is the max amount of time you can be late on a date (if at all). But surprisingly, timing isn’t a big deal for most people. The three things most people notice first on a date are… Teeth, Confidence, and Grammar! Umm, can I agree about grammar a million and five times?! Bad grammar is SUCH a turn off. I can’t tell you how many guys I’ve written off just because they used “u” instead of “you” and “2” instead of “two” in texts. One time a guy (who shall remain nameless) gave me a card for Valentine’s Day and spelled “there” wrong. He spelt it – dun dun dun – “THEIR.” Like, we were in college. How did he get in?

Apparently men are more romantic than women. Yes, that’s right. Men are supposedly the sensitive ones. They have more intimate conversations with women, while women tend to have these intimate conversations with their friends instead. And the best stat: More men than women imagine their future after a first date. Sooo, like, why aren’t they planning their weddings on Pinterest too? I do think that men can be more sensitive with women, because they can’t act like that in front of their friends like us ladies… but more romantic? Ummm, depends on the dude I guess. I know come Friday (Valentine’s Day) I will hand my boyfriend a card and chocolates, and he will probably ask me what’s for dinner. Is he more romantic than me? Doubtful. ROMANCE IS ON HIGH AT MY APARTMENT, RIGHT?!?!

Most of you probably know about the “3 day rule” and guess what?! IT’S DEAD. People want to know how the date went right away. I mean you have so many outlets to do so thanks to technology, so wouldn’t it be weird if you did wait 3 days now? The only problem with this is if you text right away, are they going to expect you to text them constantly from now on? Will they start to wonder why you’re not texting if you don’t keep in constant contact until your next date? Ugh, texting has really ruined everything, right?! 39% of people reach out to their dates the next day, but it is nice to text a date to make sure they got home safely and say thanks. And no matter what, you should always say thanks within 3 days of a date. You never know if you’ll come in contact with this person again. Things could get #awkward.

Texting is probably one of the most awkward things ever. So of course the age old question “how long should you wait to respond to a guy’s text?” is almost impossible to answer… because no one should think that much!!! I ask this question to myself when texting friends, co-workers, acquaintances, and really anyone actually. No matter who you are texting, it’s probably awkward so just stop thinking about it so much. NO ONE ACTUALLY GIVES A FUCK as long as you aren’t annoying them.

Things to note: Texting for a second time before you get a reply is the biggest text turn off for men. That along with texting a guy while he’s at work. HE HATES IT. However, he does enjoy a good emoji, so there’s that.

The biggest text turn off for women is sexy pics… so please men, do not send your date a mirror selfie. Ever. Especially if you are nude. The world needs less dick pics.

I always wonder (and worry) how much sex everyone else is having compared to me. I don’t know why and I want to quit, but it’s just one of those things you can’t help. A couple months ago, some of my guy friends claimed to be having sex an average of 8 times a week. Ooooooookay. This made me feel really bad about myself until Patti let everyone know that the majority of people want sex 2-3 times a week. NOT 8. Only 15% of men and 12% of women want sex every day. So basically, I am either friends with the 15% or they are embellishing a little.

As for location, people in New York have more sex than those in LA, and Patti attributed this to weather. Cabin fever has made many a child, so I guess that’s an upside to Winter. Maybe the only upside, but whatever. People also tend to not want to touch sweaty bodies, and it is almost impossible to be sweaty from lying in bed during Winter. In LA, though, dudes are wayyyyyyyyy more sweaty.

Also – Patti said that people in their 30s have the most sex. So, as a 20-something, I am ecstatic that I have something to look forward to when my youth is over. Oh, my youth is already over? You get the point…

Which Sex Wants It More?

BOTH. Both want it just as bad. In the words of Dr. Helen Fisher: “One day, we will accept that women are just as sexual as men and men are just as romantic as women.” Best quote of the panel, I think.

Sexy Time is (said in my best Borat voice)…

10pm! The majority of people want to have sex at 10pm. And the morning people want to do it at 6am. You can’t be both though… and the majority of people want it at night. Sex is basically the gym… and let me tell you, I am NOT a morning girl. I always felt bad that I wasn’t into morning sex (unless for some reason I’m up and not pressing snooze until the last possible minute… or it’s a weekend) but Patti very boldly stated that she hates morning sex. It’s like, I’M SLEEPING. GO AWAY. If I was going to wake up in the morning, it would be to get something done (like writing) or go for a run. Not have sex. #Sorry

The best possible stat to come out of this panel was the #1 place singles want to have sex. ON A BOAT. Yes, that’s right. A mother f*cking boat. Is this because of T-Pain and The Lonely Island? Probably. I never really thought about sex on a boat, but hey why not? If you were thinking plane, that’s a close second but it’s hard to do. However, apparently sex is great on a plane because you feel like you’re in love at high altitudes, even when you’re not. #Interesting

So why are people so intrigued by having sex in public, crazy places. Well, because it’s a fantasy AKA it will never actually happen. I wrote about the once. Oh well.

This might surprise you, but red heads have the most orgasms. MEANING blondes do not actually have more fun (side note: they never did; brunettes are truly the most adventurous creatures). But anyway… trip to the hair salon? Umm yes please. Also maybe a trip to the Verizon store too. Apparently singles with Android phones receive orgasms over 90% of the time. Maybe that’s because men tend to have both more Androids and more orgasms. #JustSayin

As for faking orgasms, 72% of women have faked an orgasm and over 30% of men have too. If you’re sitting there thinking HOW THE HELL DO MEN FAKE ORGASMS you’re not alone… because hi, I’m clueless. Match.com tweeted to me that maybe he has whiskey dick. But… okay, if he has whiskey dick, we all know he’s going to pass out before or while he’s inside you, so he wouldn’t even get the chance to fake it. As for women, you ladies need to stop faking O’s. Seriously. Never have, never will. You don’t want a man thinking he’s done a great job when he hasn’t. He’ll never try harder!

Well, as you already know, you shouldn’t have sex on the first date. This being because it’s hard to see red flags with a dick inside you. And no one wants to get dick-matized too early in the game.

No one should get married before 30.

If you weren’t able to watch the event and you want more after reading my intense recap, watch here: http://youtu.be/hAizfmjcxOM. Happy dating (and fucking)!