This was confirmed in an exhaustive piece written by Jennifer Senior of New York Magazine. Senior used an array of psychological research and data to prove that the four years people spend in dimly-lit brick buildings mold their young, vulnerable, still-formative psyches like a kid molds Play-Doh. Some become crude yet wondrous works of art, others become malformed monsters.

However, there’s more to high school than just the experiences that happen to people there. That is to say, high school stays with nearly everyone for other reasons than because it shaped their adult personalities.

Social networks have irrevocably changed life and communication in the modern world. One of the aspects of life that it’s changed is what happens after high school.

In the days of old, in the closing days (and hours) of high school, students passed around yearbooks for signing. The glee of moving on in life fought the sorrow of leaving familiarity behind. The impetuousness of confronting the “real world” grappled the consternation about having to finally “grow up” a bit. As people signed yearbooks with either thoughtless platitudes or heartfelt sentiments, it was very likely the last time they’d see their classmates again. All the people would drift apart until a smattering of the class of [insert year] met up 10 years later, then 20 years later, and then eventually met at the grave.

This is not so in current times.

A girl signed my yearbook in 2007. When I joined Facebook in 2009 and friended her, I was able to see exactly what she had been up to for the past two years and what she was doing now. It was like we hadn’t been separated at all; I knew as much about her during high school as I did about her two years later because of social media.

Why attend a high school reunion when you’ve been Facebook “friends” with your fellow graduates for some time and therefore already know what they’re up to, what they’re doing, and how successful they are? 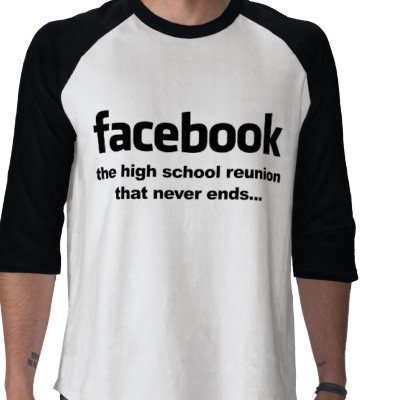 In that sense, we don’t ever leave high school. The internet keeps us shackled to the class of [insert year] forever.

There’s also another way in which people don’t depart from those seemingly special four years of their lives: “Should haves”

Too many people lose their way in life, some through their own mistakes, but others due to no fault of their own.  But what both groups have in common is that they question their actions during high school. “If I were back in high school, I would’ve done things differently,” “What if I had done better at [insert topic],” and “I should’ve done [insert apparent panacea that would’ve make the person successful]” as well as other phrases of that nature are commonplace among crestfallen adults and “kidults” that haven’t met success. High school always haunts these people in the form of ugly “what-ifs” that deprive them of sleep and joy.

High school is also present in mainstream society, outside of personal predilections. For what is American celebrity culture if not high school on a larger stage with more money, more drugs, and more attention? There are the popular people/”mean girls” of the celeb scene as well as geeks, jocks, and other factions. The power-players of Hollywood are analogous to the power-players of high school. Some people look at celebs in awe, the same way they looked at the head cheerleader or the captain of the football team in awe all those years ago. The ages of the people change, but the thoughts stay the same.

We never leave high school because, even if we are content with what we’ve done since those years, we are regularly confronted with people whose lives have been on the decline since then and wish they could go back. We are bombarded by the media that is, in some ways, a grander version of high school. And our very psychological makeup is influenced by the experiences we had there—by the slings and arrows of outrageous fortune flung by the petty, the jealous, the cruel, and the aloof.

Does Anyone Actually Care What Ryan Lochte Would Do?