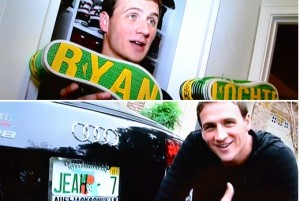 In the first couple of minutes, it became clear that there is much more to Ryan Lochte than we all thought. Yes, most people know him as that white Olympic swimmer who thinks he’s black (he, like, got grillz) — but he is also into fashion. And is starting a fashion line. I remember when Ryan was on the Fashion Police way back during the Olympics. Joan was asking him all these weird sexual questions and Ryan was awkward as fuck. Who knew he’d come back on the scene months later with an effing reality show where he is not awkward at all. Talk about quickly getting over camera fears…

Getting back to fashion — Ryan designs shoes. And by that, I mean he puts his name on the bottom of shows so his name can be seen everywhere… walking along. Ryan Lochte, walking everywhere. Do you think people actually buy these shoes? Because I am not quite sure.

Ryan also puts his last name into any and all phrases possible, which we will refer to as ‘Lochteisms.’ For instance, he has a Lochterage, which is what he calls his entourage because he of course has his own personal entourage. Every is walking along, following him… duh. My first thought when seeing said Lochterage was who are all these people and how does Ryan have so many friends who are available at the same time on the same day. Was this a weekend day? Or does no one work in Florida? Must be nice.

Part of the Lochterage was apparently Ryan’s family. This was understandable for his little brother, Devon, who is 22… and was wearing a tuxedo t-shirt (really?)… but for the older girls who have kids and look slightly trashy… I doubt they all hang out on the reg. That whole midweek bowling night and couch session. I’m not buying it. Sorry.

Anyway, Ryan had a pregame and girls everywhere were eating pizza (I doubt Ryan Lochte hangs with girls who eat). Then they all went out to a bar, and Ryan asked a random girl out on a date. He wasn’t into her anymore though once she revealed she was moving to LA. It was at that moment I realized Ryan might be looking for love… but I’m not sure if that was just me buying into his bullshit, which he is so full of (he claims his favorite movie is What Women Want… what?! are you serious?!), OR if he really is this sad little 28-year-old puppy dog living in a major college town in Florida who just can’t find a girlfriend! #DoubtIt.

As for Ryan’s trademark saying, ‘JEAH,’ that he obviously said probably hundreds of times throughout the episode — we’re still confused. What does it mean?! Well, no one knows what it means… but it’s provocative. It gets the people going. Ryan also has no idea what douchebag means. Like, he really doesn’t know what it means. It’s sad. But he does know one thing: if you’re going to be a man at night, you gotta be a man in the morning… DUH.

After the series premiere, I was sad to learn my question was unanswered. I still didn’t know what Ryan would do and when he would do it. All I learned was that Ryan Lochte is a douche, which I already knew, who rolls deep and pees in pools. ‘What Would Ryan Lochte Do‘ is like The Hills meets any show featuring Kim Kardashian. You’ve got this wannabe fashionista trying to make it in the fashion world (I hope Ryan gets an internship soon) who is also desperately looking for love. Like, desperately. Is E! going to find and cast Ryan a GF soon? Because that would be absolutely ridiculous.

One last thing: Did anyone notice the promo/clip-going-into-break with Ryan Lochte cheerleaders? What was that?!

Do We Ever Really Leave High School?