If you’re like me, then you spend a good portion of your Sundays, hung over, wrapped in a blanket, watching Barefoot Contessa marathons on the Food Network — wondering why it is that you have to show up for work tomorrow at 9 a.m. instead of spending your days in East Hampton, perusing the markets in an airy button-down blouse, while preparing beef bourguignon for your adorably doofy husband, Jeffery.

Okay, so I will obviously never be Ina Garten, but knowing this only intensifies my Sunday blues. And that’s usually about the time I reach for my laptop and start to longingly scroll through Pinterest — a more “realistic” approach to my domestic aspirations. And I start to think, if only I had more time, more motivation, more money, a cleaner apartment and more space to accommodate that DYI wine corkboard/picture frame/hat rack that would look so chic on that wall over there. If only I wasn’t so hung over, and didn’t share such a tiny space with my boyfriend, his roommate, and a dog that is determined to make sure we never ever have nice things. If only.

Sometimes, I’ll even spring for a copy of Everyday with Rachel Ray, mark up the entire issue and vow to my boyfriend that I will make EVERY amazing recipe for dinner that week. Of course this never actually happens. I’m too tired after work; I’d rather just go to happy hour; the kitchen is way too small; no one did the dishes, etc.

But I’m still determined to live a life as close to the Barefoot as a twenty-something, working girl in NYC can get. It started with my 24th birthday in September. Like any self-respecting Virgo, I asked my father for a Hamilton Beech crock pot, and it’s the best thing that has ever happened to me.

So below you will find a few simple recipes for the lazy, unmotivated, probably drunk twenty-something who just wants to prove that Pinterest and the Food Network are real life. Don’t worry about measuring cups, or tablespoons or any of that stuff that you probably don’t even have in your kitchen. If you have a crock pot, then you can simply throw the ingredients together, in the half hour between the gym and work, crank that baby on low and come home to a deliciously smelling apartment and a ready-to-go meal by 6 p.m.

And if you don’t have that, which you probably don’t, because, well hey, you’re twenty-something after all, then you can probably just throw the same ingredients into the oven and produce something relatively edible. 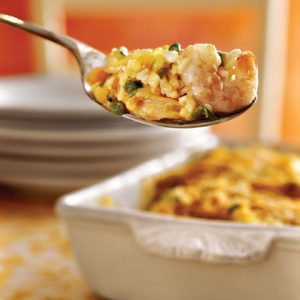 1. Cook rice. Boil water in a sauce pan. Throw in 1-3 cups of rice (depending on how many people you’re cooking for and amount of leftovers you want). Cover, reduce heat, and let simmer for 30-40 minutes or until water is absorbed.

2. Sauté some veggies. I like to use spinach, red/yellow/orange peppers and onions. You can use olive oil or margarine. Season with paprika, kosher salt and pepper.

3. Defrost shrimp then sauté with olive oil or margarine – season with paprika, salt and pepper.

4. Once shrimp is cooked, toss in buffalo sauce.

5. Throw everything into pot of rice and mix. Add a quarter of a cup of broth.

6. Throw into a casserole dish, cover with cheddar and put in oven on 400 degrees for 15 minutes.

*This can also be done with chicken