Thanks to Forever Twenty Somethings and peer pressure from more middle school girls than I care to admit, I was recently lured into a dark, spiraling hole of paranoia – aka the ABC Family hit series Pretty Little Liars.

For those of you familiar with the show, I need not explain the instant addiction that ensues. It’s confusing and terrible and exhilarating. It’s crack. Pure, teen, crack perfection.

It started on a Thursday. My boyfriend was at a Devil’s game, and I was all alone, with nothing but my Kindle Fire, an Amy’s Burrito, and the entire evening to myself.

Maybe it was the teenage girl in me. Maybe it was the idea of not having to compromise on a gender neutral film/TV show for once. But as I perused the video selection on Amazon, something tugged at my heart strings, beckoning me to watch.

So I took the plunge, slightly embarrassed that I was actually paying for the pilot episode of an ABC Fam show (which I later realized was on NetFlix only after I bought the whole season). But to be honest, it was probably the best $25 that I’ve ever spent. Like ever.

At the time, I didn’t know that this purchase would directly lead to the most unproductive week and a half of my life.

I’m not ashamed. But life hasn’t been the same for me since I watched my way through more than 70 episodes. Many a night was spent hunched over my Kindle – wracked with paranoia, a perpetual kink in my neck as I desperatley tried to solve the mystery of the ever-elusive “A.” But through this obsession, I still had responsibilities. No one cared how bad I needed answers. Nobody cared how tricked and betrayed I felt by certain characters who will remain nameless. I had people to feed, a dog to walk, a job. But how could I be expected to live up to my domestic aspirations when the town of Rosewood was in such utter dismay? Where could I possibly find the time to cook, let alone go food shopping?

Luckily, I  found the perfect solution: a quick and easy crockpot recipe that lasted through an entire season (in PLL marathon time, that’s like 72 hours.)

So, in honor of PLL Day, I present to you, ladies and gentlemen, Crockpot Chicken FajitAs. Get it?!? Fajit “A.” OK.

They’re Amazing. And really eAsy. And I didn’t have to worry about lunch or dinner for like a week – which was great for me, since I had a lot of episodes to get through. And if you’re taking the plunge into the cruel, cruel world of PLL, you don’t need anymore stress in your life. Trust me.

So here you go.

1. Slice up peppers and onions and line the bottom of the crockpot.

2. Place chicken on bed on top of veggies 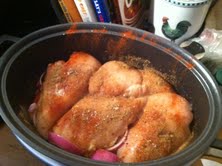 7. When it’s done – it will not look edible. It will look weird and charred.  But this is easily fixed with the next step. 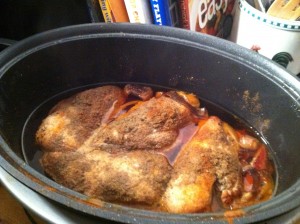 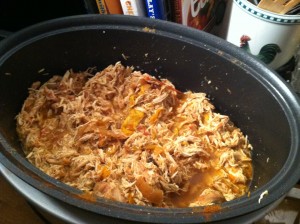 9. Then do whatever you do with fajitas or tacos.

10. Now go watch Pretty Little Liars. You won’t regret it. Well, you probably will, but do it anyway.

Oh and in case you didn’t make the connection. Check out Officer Garrett in this throwback:

15 Reasons You Should Get Yourself An Intel Tablet