Going out is kind of like a ritual for 20 somethings everywhere. You get dressed up. You go to your friends to pre-game. You head out to a bar… maybe head to another one after… and then take a cab home. You might get food… or you might pass out before eating and wake up with the spins, itching for a glass of water.

Maybe this sounds fun in the moment. But after a while, it becomes boring. In college, this WAS your weekend – every weekend. And now that you’re graduated and making money, it doesn’t have to be the same… right?

I graduated a little over a year ago and can tell you right now that I am already sick of going out in the semi-large city of Boston. Of course there are  many more bars than the ones my friends and I tend to constantly frequent in the area… but for some reason we go back to the same bars – every weekend. This is partly because we know we like them… and partly because we probably wouldn’t like any others. We can’t pay a cover every time we go out, so that’s a factor. And we can’t always pay for 30 dollar cab rides, either.

Yeah, we could try going to new bars… but that is sometimes a wasted effort. And people usually end up pissed off when their cover money goes to waste. Oh and bars WITHOUT cover? Any bar without a cover in the city of Boston will most likely lack dancing and lack fun. I think we have found all the bars (aka one – Clerys) that have dancing for free. Even if you’re from a happening city where the list of bars never ends, you are most likely going to the same ones all the time – oh, and you’re probably sick of it too.

So does this mean we’re getting old? And will soon limit our “going out” nights to one night a weekend …. and then one night every two weeks… and eventually once a month?!!?!? Ugh, no. You just have to keep things fresh…

There are plenty of ways to make your weekends different from the rest.

1. Karaoke: No one constantly goes to karaoke bars. And you probably aren’t sick of them either. My friends and I have gone to a place called Maluken in Boston that has saki bombs AND karaoke. Winning.

2. Saki bombing: As I said before – winning. This is not something people do often. It can be pricey, though, so save up for it.

3. Pub Crawl: Blah, blah, blah. These are so super typical. Obviously, no one participates in a pub crawl every weekend (unless that’s your thing), so it will most likely be exciting and different when you do it. There are other ways to make a pub crawl fun and different though, though (aka the next two ideas).

3. Pub Golf: This can either be a day drinking event or night drinking event! Basically, everyone dresses up like golfers (aka really, really, ridiculously preppy) and breaks off into teams. You can do as many holes as you want (a hole is a bar or apartment/house). A hole in one is different for each place – maybe getting a strangers number could be one… or kissing a stranger of the same sex. The rules and holes are up to you and your group of friends…

4. The Amazing Drinking Race: So, we all know the show “The Amazing Race.” Make a drinking game out of it. Only problem would be to figure out a sober driver for each team… or maybe you can take public transportation, walk, or have a certain amount of money for cabs. A friend suggested to have people bum rides off strangers. How fun would this be?!

5. House Party: No one has house parties anymore. So when someone does, memories of drunken high school and college nights will come into play – and you will think you are 19 again. Enough said. (House parties are a once every few months kind of thing – extra points if the house comes with a bbq, pool, or hot tub) 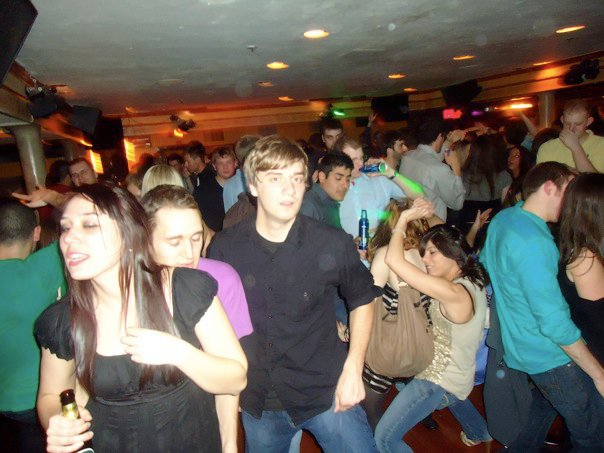 Have any other ideas? I would love to hear… and not just for the blog – for personal reasons.

Working Out at… Work