Welcome to 2016. A year in which when you make food, you take pictures of it. I used to think to cook Insta-worthy food you had to spend a lot of time in the kitchen. That is so false though. You can spend 5 minutes in the kitchen making the biggest mess ever and put your dish in good lighting, and you will have a fantastic picture — and great tasting food.

I found each of the below recipes online and never thought I could make the dishes look as good as they did in their professional photos. In fact, I always get a little nervous that my dish won’t look (or taste) like they do in cookbooks or on the cook’s website. Of course I will make something every now and then that looks awful but tastes great (or looks awful and tastes awful) but for the most part I’ve had good luck thus far.

Here are 6 dishes that not only photograph well ~for the likes~ but also taste amaaaaaaazing. Try cooking one yourself and join me in making Insta-worthy meals by using the hashtag #AdultingInTheKitchen! 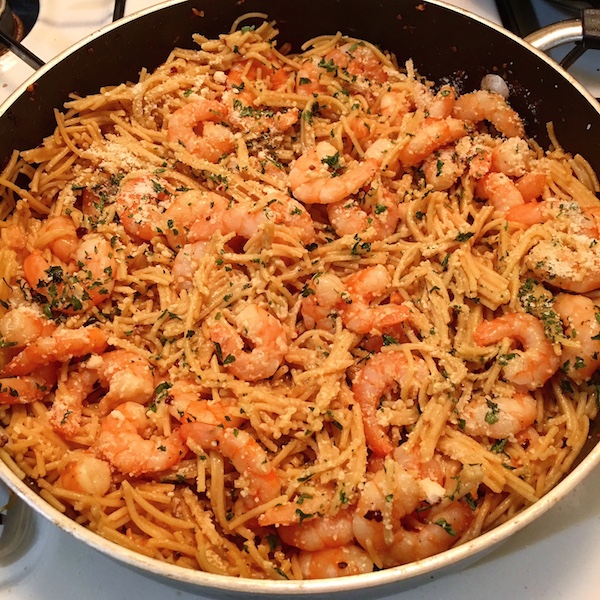 For this one, I kind of followed this recipe from Damn Delicious. I cooked Ancient Harvest quinoa linguine. I melted the butter on the skillet, added garlic, wine, and lemon juice, and then added already-cooked and thawed shrimp because I didn’t have uncooked shrimp and I wanted to use the cooked shrimp that had been sitting in my freezer. I stirred everything together over heat and added the ‘zest of a lemon’ and parsley and then I took a picture. 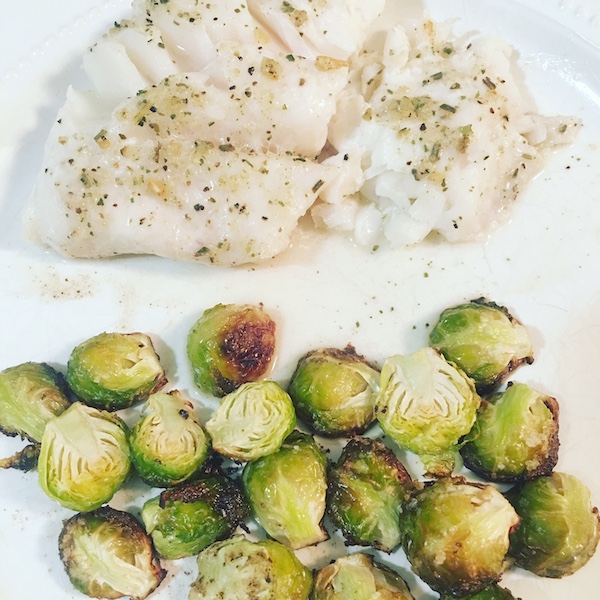 For this one, I preheat the oven to 400, brushed olive oil and lemon juice on both sides of the cod. Then I put this ‘herb and garlic’ spice over the top of cod, but I used way too much so it was super salty. However, it looked pretty so I win. I cooked it in the oven for about 18 minutes because I called my mom and she said to overcook it.

For the brussels, I cut and peeled 1 pound of them and washed them. Then I mixed them in a bowl with 1 tbsp of olive oil and 1 tsp of salt. Then I put them on a baking pan and cooked them for 35ish minutes flipping them halfway through. I make these all the time and sub in or add other veggies (cauliflower and butternut squash mostly). If I add more veggies, I just add more olive oil and salt. It’s really simple and I don’t actually take measurements of stuff. 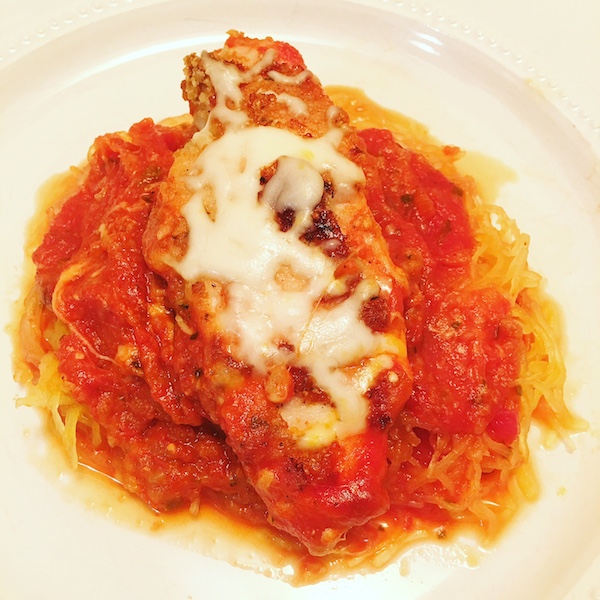 Okay, this is a recipe I was super excited about because I love love love chicken parm. I combined these two recipes: SkinnyTaste’s Baked Chicken Parm and TheKitchn’s Microwavable Spaghetti Squash. While in the microwave, the spaghetti squash literally exploded, but it was okay because the pasta-looking strands were still in tact. Phew. I googled this to see if it had happened to anyone else and OH IT DID, but it exploded after coming out of the microwave and oven and got stuck in people’s eyes and on their walls. So thank GOD it exploded while in the microwave. I’m kind of scarred and am not sure I will be making spaghetti squash again, BUT it is extremely and photographs well. Plus, this had never happened to me before.

Anyway, this was maybe the best tasting dish I’ve ever cooked (in my opinion). I recommend this HIGHLY.

Sidenote: I used the chicken parm recipe from SkinnyTaste’s cookbook, which is slightly different than the one online. 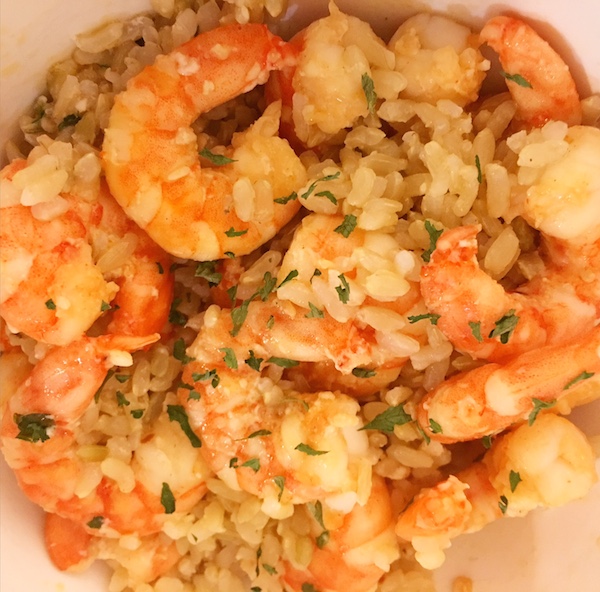 For this, I followed SkinnyTaste’s Garlic Shrimp recipe and mixed the finished product with Trader Joe’s organic brown rice. I cooked the shrimp for a little too long, so it could have tasted it better, but after I threw on the parsley, it looked badass. It was super healthy and tasted super healthy so yay. 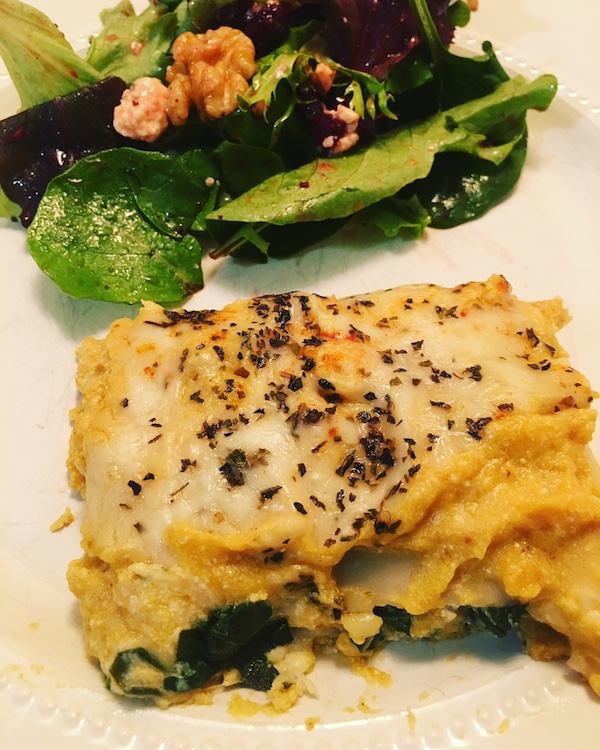 I used a recipe from Julia’s Album and it came out AMAZING. I am obsessed with butternut squash so this was basically like candy to me, except I don’t really like candy so it was like bread to me (I love bread). I don’t understand how to use a food processor (its on my to-do list), so I mixed the ingredients together without it. This was so easy to make and delicious. I had a small side salad with it. Still swooning over this meal and it’s been weeks. 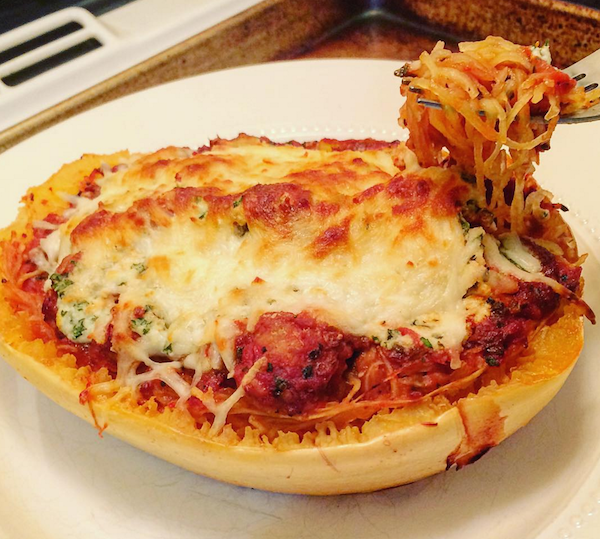 Okay, I’m not sure I can call this one ‘easy,’ but for some people I’m sure it would be. Okay, maybe it wasn’t hard but there was a lot going on while preparing it and it takes a while to cook. The recipe is from SkinnyTaste of course. My spaghetti squashes were bigger than the ‘small’ ones the recipe asked for and I only used two so I think that’s why mine look different than the one on the website. Regardless of looks, this was SO good. 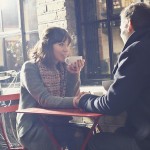 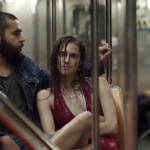