Decked out in graphic T-shirts from Abercrombie with roll-on-glitter covering my eyelids and a big smile sporting a whole lot of colorful metal, I thought I was hot shit. Now, I have no idea what I was thinking. My pre-teen and teen years were spent trying to be “trendy,” but boy has the meaning of trendy changed. I guess that’s what a “trend” is though. Something that doesn’t last and later makes you absolutely cringe when you see pictures of said trend.

Coco Chanel said it best — Fashion passes, Style remains. And that is what I tell myself over and over again when ever I come in contact with a picture of my 12 year old self. Here are 10 trends we once claimed to love, that now make us question our eyesight. Did you dabble?

Body Glitter: As pre-teens (and teens), we loved glitter. We wore it on our shirts, our tanks, our pants, and even our bodies. We would invade Bath and Body Works about 10 times a week smelling different scents, picking up presents for friends (how many Bath and Body Works gift sets did you receive back then?) and, of course, checking out the line specially made for us pre-teens! Our favorite item was the body glitter. The kind you could roll on your face, your arms, your legs, your stomach, etc for some extra shimmer and shine. For some reason, I thought it was both normal and cool to use the body glitter stick as eye shadow. Now if you remember the size of the rolling ball that exposed the glitter to your skin, I was basically playing with fire. I’m surprised I never blinded myself in the process. At least I looked good? Thanks, Art Stuff.

Butterfly Clips: This was a trend most popular in middle school that thankfully faded fast. Clipping your hair back is of course still okay when you’re 1. getting your hair done, 2. lounging around your apartment, or 3. using a hair elastic. But using a giant ass clip out in public? No thanks. Now try using a giant ass clip in the shape of an insect… AKA a butterfly… AKA a glittery butterfly. Maybe one would have been cute in my hair… but I could never wear just one. I had to put, like, four or five or more in my hair. It was like I had multiple growths coming out of my head. I bet Ke$ha was a fan of butterfly clips.

Glitter Camis: Travel back in time to a middle school dance. What were you changing into after school in the bathroom? Yes — A glitter ‘cami’ (nickname for camisole) from Limited Too. These tanks were the coolest. They had a built in bra which was great because our breasts were just so huge in the 7th grade… Wait a minute… They had spaghetti straps which were borderline slutty since we weren’t allowed to were them during the school day. And they had glitter everywhere. And boy did we love our glitter back in 2001. I think I had a LTD2 cami in every color. It was like a disease. And I definitely wore them out in public until I actually grew boobs and had to wear a real bra. Like, when I was in high school I was still wearing Limited Too. That was a problem.

Graphic T’s with or without Glitter: A must-have item back in the day was obviously the graphic T. I remember sporting shirts that said things such as ‘Abercrombie and Fitch sailing team‘ and beneath that or on the back of the shirt, ‘1982‘ and a picture of a sail boat… To this day I don’t understand why. I had no interest in sailing. I remember deciding I NEEDED to have shirts like this just because I fell in love with them… I will never know what attracted me to the pink shirt that read ‘SoCal’‘ in big white letters with a glittery seagull under it. I had never been to California. Or the shirt that said ‘Maybe if you were in a band.’ Yes, I actually had that shirt. Was I trying to tell people that I would sleep with them if they were in a band? Or was I trying to tell people that YES, I shop at Abercrombie and Fitch and Hollister (and occasionally American Eagle) therefore making me extremely trendy and extremely cool. Oh, and such shirts cost around 40/50 dollars. Why? Why, high school lack-of-fashion-sense… WHY?

Colorful Braces: We didn’t exactly choose to have braces. Our parents took us to the orthodontist because they decided our teeth were so bad that they would pay a lot of money for us to have a whole bunch of metal in our mouths for a few years. I was happy to have braces because everyone else did and, like, if you didn’t have braces, you basically weren’t cool. However, you had to have them while everyone else did. The first people to get braces were looked at funny because they were different… and the last people to get them out were looked at funny because, umm, why didn’t they get them out yet? When we had braces it was trendy to have different colors. I usually went with a pink and orange theme… or green and white (school colors – yes)… but having plain GRAY braces was a fashion fail.

Sunglasses with blinged-out designs on the side: Way back before oversized sunglasses were popular, cheap sunglasses with glittery stars and hearts on the sides were all the rage. In middle school, it was all about looking ‘good’ and feeling good. However, we didn’t actually care if we looked good… All that mattered was that we were wearing the same shit as everyone else. We didn’t care if our sunglasses were expensive or inexpensive. We didn’t care if our sunglasses fit our face and made us look good. All we cared about was the amount of bling next to our eye. The more the better.

Colorful, ruffled skirts with bows and fun designs: Crazy skirts were a must-have item back in 2004. Remember the scene in Mean Girls where Lindsay and the girls were walking down the hall before she fell in the trashcan? That skirt she was wearing made me fall in love with skirts. I bought 13 skirts that Spring after the movie came out. Thirteen. Most from Abercrombie. Some from Hollister. Two from Gap because my mom clearly saw the horrid-ness of the trend and made me go there for “longer” skirts (I never wore those two Gap skirts). My beloved Abercrombie/Hollister skirts had ruffles. Some made me look like I was going to play a quick game of tennis. Others made me look like a clown. Can you believe these girls were actually supposed to be trendy?! 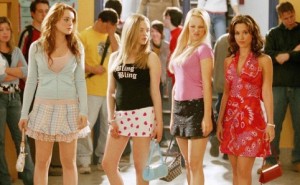 Polos: How un-stylish. For guys, polos are obviously still fine. But for girls, tight little polos with symbols on them telling your ‘social class’ – those days are over. Of course we all wanted to have the moose. It was way better than the eagle… and the seagull… and the cherry (unless the cherry was actually from A&F and not Kohls). Back then, most of us were clueless as to what Ralph Lauren was due to us being blinded by A&F, Hollister, and AE. But when we did figure it out, we started wearing Polo polos… and eventually spent our parent’s money on Lacoste polos. Of course not everyone could afford such polos, which divided people up by their polo brand. We were so ‘branded’ back then. Like, why didn’t we care about fashion? Why did we have to spend so much money on unnecessary items that didn’t even look good on us?

Ribbons: In high school, ribbons were everywhere. They were being used as headbands, belts, handbag decor, and of course as hair ties (aka bows) for us preppy assholes. For some reason it was also stylish to tie a ribbon around one of your belt loops… Why? I have no idea… But because of this fad, I would occasionally ‘steal’ the ribbons off of belt loops from Abercrombie and Fitch pants. I mean, they were so easy to access. The thrill of stealthily ripping the bows off of jeans and colored corduroy pants really made me feel like such a fucking badass. I used to untie ribbons off of pants and creepily stuff them in my pockets… Really? What was wrong with me? I remember once after I left the store, I tied a pink bow covered in moose around my hot pink Coach bag. It stayed there for months. It was a phase. The whole ribbon thing was. Granted I was a cheerleader, so putting bows in my hair was exciting – but out in public… ehh what was I thinking?

Ezra Fitch Jeans: This was quite possibly the dumbest thing Abercrombie and Fitch ever did. As if their jeans weren’t overpriced enough, they had to go and create another kind of more expensive jean by the exclusive designer Ezra Fitch. I never understood this. I bought my first pair of real designer jeans Sophomore year of high school. Sevens with a pink design on the ass. Yet I still wanted a pair of Ezra Fitch jeans. I never actually owned a pair of Ezra Fitch jeans, making me extremely jealous of any girl who did… even though I had real designer jeans. If I was my parent, I would have thrown me out of a window at some point. What a spoiled, unfashionable idiot I was. 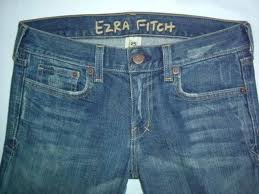 I wonder if we will look back on our colored denim, skinny jeans, and trendy blouses one day and think ‘WTF was I wearing?’ I mean, I once truly believed the above items were stylish. What unfashionable items did you used to wear?