We did some pretty weird things as kids. Like, really really weird. We gave inanimate objects a voice (ex: we had dolls and action figures speak to each other by shaking them violently). We were attached to faux pets (tamagotchi anyone?). We pretended we were people we weren’t on the playground (anyone else play ‘The Spice Girls?’). And we ate lunchables (I will still never understand why). But one extremely odd thing we enjoyed doing was playing hand games… aka clapping our hands together with someone else’s while chanting some bizarre rhyme. Perhaps this was because the internet was just coming to life and iPads didn’t yet exist… but we loved playing these games with each other. Maybe this will just appeal to girls… and maybe this will just appeal to those who went to camp… but here are 5 hand games I played as a kid and will never forget. Do you remember them? 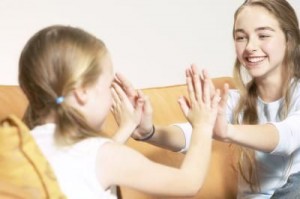 This game is probably one of the oldest in the books. I bet our parents played it. I bet our grandparents played it. And I bet no one plays it anymore (kids have iPads, duh). But we played it… until we discovered other rhymes with ‘bad words’ and cool lines. Plus, Miss Mary Mack was definitely huge, gross, and ugly.

Miss Suzy was a classic and went on for AGES. I’m pretty sure we made things up and had this rhyme go on for days. As I said, the lack of internet made us easily entertained by such things. As for the song’s many random lines, I’m not sure what a 40 acre bra is… but we found it HILARIOUS to say bra. Also, for a long time I thought a refridgerator was a fridgerator… and it was more likely than not because of this hand game. I learned how to spell dark very well from this game and learned to HATE – absolutely hate – the word ‘pa.’ PA? Can’t you say dad? What is pa? Is this 1860?

Coca cola… went to town
Hi C… knocked him down
7 Up… picked him up
brought him… to Dr Pepper
Dr Pepper… gave him
Jelly Rolls… Sleeping Pills
In the land of mars where the ladies smoke cigars
Every puff they take is enough to kill a snake
When the snake is dead they put roses in his head
When the roses die they put diamonds in his eye
When the diamonds break it is time to bake a cake
When the cake is done it is 1961. Ding.

This was the creepiest hand game of them all. First we chanted about sodas and juices coming alive and walking around. Then we gave Dr. Pepper jelly rolls and sleeping pills and suddenly were taken to Mars surrounded by ladies smoking cigars. Then snakes died, years passed, and we made a cake. Also, it was 1961. What? The bizarreness of this song reminded me of the BSB song If You Want It To Be Good Girl because it opened with an Egyptian sounding sound that reminded me of the snake in this hand game jingle. That’s weird, but I still think of that song when I hear this rhyme and vice versa, so whatever.

The spades go:
eenie meenie popsakini
ooh aah oobelini
otchie kothchie liberace
say the magic words:
a peach, a plum, a half a stick of chewing gum
and if you want the other half, this is what you say
amen, amen, amendiego sandiego
hocus pocus dominocus
sis sis, sis boom bah
rivers, rivers, rah rah rah
boo boo boo
criss cross, applesauce
do me a favor and get lost
while you’re at it drop dead
either that or lose your head.
sitting on a trash can
I can, you can, nobody else can
sitting around, nothing to do
along comes a fat lady, cootchie cootchie coo!

WTF. People lined up to play this game. I remember asking others to play ‘the spades’ with me at camp all the time. People used to get so damn excited to play the spades. WHY? Why I ask? Did we enjoy talking about fat people? Did we enjoy tickling each other while saying ‘cootchi cootchie coo?’ And why did the fat person do the tickling? I know we enjoyed giving each other ‘the chills’ every day… aka rubbing each others’ backs in a very large line or circle (maybe this was just the camp I went to?)… but tickling another girl pretending to be a fat person? Ahh, no.

I Remember When I Left For College…