As a kid I cared about very few things. I cared about what teacher I was assigned to for the next year. I cared about getting to dance class on time. And I cared about going to Toys R Us on a weekly basis to purchase toys. From stuffed animals to board games to dolls… I had to have it all. And even though I wasn’t big on playing with dolls, I still made my parents buy them for me (I mean, like, everyone else had them) and occasionally played with (slash did horrible things to) them.

Barbie was like my BFF. I remember strolling down the Barbie isle like it was yesterday. It was pink, long, and full of awesomeness. Barbies’ outfits were, like, so cool. And if you can’t remember how Barbie and her friends dressed back then, just picture the cast of Clueless. But seriously…

I had so many Barbies, you might have mistook my room for Toys R Us. I had doll houses on doll houses on doll houses. And boxes full of skinny, big boobed, blonde bombshells – all in different outfits. There was teacher Barbie (she came with a desk). Rock Star Barbie. Hawaiian Barbie. Basically every kind of Barbie you can think of. And there wasn’t just Barbie. There were her siblings… her boyfriend… and her friends!

First, we had Ken (her super hot BF). Then we had her sister, Skipper. And then we obv had her BFFs (I forget their names – I just remember one was black). Eventually we also had Kelly, who I think was supposed to be Barbie’s little sister. I was obsessed with Kelly. Obsessed to the point where I decided she NEEDED a boyfriend, so I cut the hair off of other Kelly dolls so she could have male friends her size. Weird, I know.

I was also obsessed with My Little Pony. Except this obsession took place far too long ago for me to remember it. All I know is I used to watch the show and collect the ponies. And when Summer Roberts from The OC had a My Little Pony that she called Princess Sparkle, I of course broke out an old MLP and brought it to college. It was totally normal.

Polly Pocket was another fad. Except she was so effing small that she always got lost… or maybe that was because I was irresponsible. But honestly, she lived in a center for ants. Not my fault.

Baby All Gone had to be spoon fed. WTF. I can’t believe I sat there feeding a doll. There was a big difference between this doll and Barbie, who didn’t eat anything. Ever. This is probably why we were so confused as children. To eat or not to eat? That is the question. 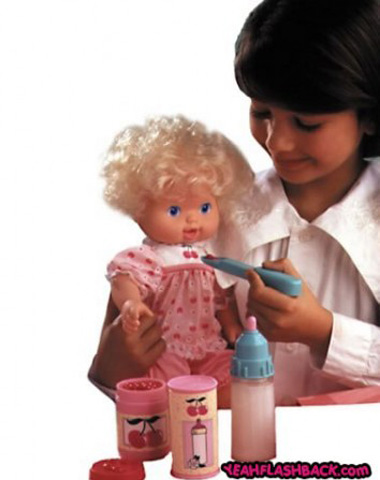 Finally, American Girl Dolls. These betches deserve their own post, but since they are not getting one I will let you know that American Girl Dolls were – and still are – super awesome (they even have their own store now). I had Samantha (duh – my name is Samantha) and actually believed she looked liked me. I also had another, but I forget which one (sorry to whoever bought it for me). Samantha is now extinct (how can you just get rid of a doll???)… so I think she is worth, like, a lot of money but no one will let me sell her. I used to buy outfits for my dolls everywhere… and also wrote books (and television shows) about them (yes – remember the write-your-own ‘meet ___’ books? You could make up your own characters and stories. This is where my love for writing began. I even wrote some stories in television SCRIPT form. Who knew?) 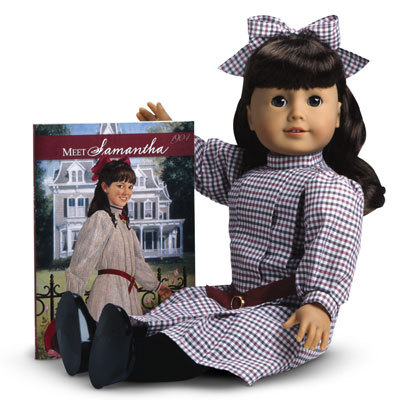 Oh, and who can forget BABY? I had Baby. I used to paint baby’s nails… and then put ‘makeup’ on it with nail polish. Baby is still creepin’ around my house… but it only has one eye. I have no idea what happened to the other eye… but I have 3 younger brothers, so that could explain something. 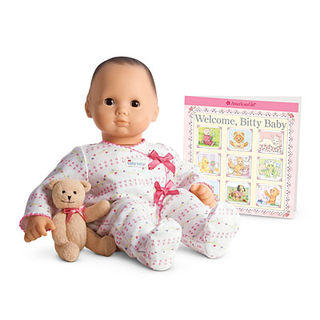 What dolls did you make your parents buy for you when you were younger? Tell us in the comments or tweet us at @forever20tweets!

In This Week’s News… Kimye, Justin Bieberlake, and more!

What To Do When A Co-Worker Likes You (Too Much)