Back in high school, we all bowed down to a certain ultra sketchy white guy who went by the name of Tom. He was the most popular guy around… Literally. He was everybody’s friend. 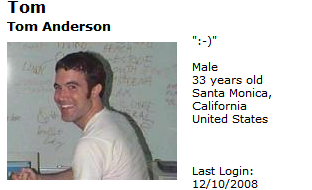 Tom was the creator of MySpace. AKA the place we spent most of our time between 2004 and 2006.

MySpace was unlike anything we had ever seen before. It was a social network before it’s time. On MySpace, like your current BFF Facebook, you had a profile and friends. You also could join groups and search for literally anyone. And when I say anyone, I mean anyone. There were no limitations or privacy settings back then.

The structure of your profile included your picture, your name, your age, your location, your bio, and your favorite shit (i.e. quotes, hobbies, and movies). For profile pictures people used ‘selfies’ AKA pictures of oneself taken by oneself. But they weren’t ‘cute’ selfies. They were slutty,  photoshopped, and taken from weird angles. Some pictures were taken in mirrors while the culprit held the camera high above their head. Some pictures were taken straight on of a very sad looking face. Other pictures didn’t even show the person’s face. All of these pictures were called ’emo,’ which if you didn’t realize is short for emotional. And boy were we emotional back then. In addition to all of this we also had a feed for comments. This was the Facebook wall before Facebook. We would comment on our friends’ profiles telling them how much we <3ed them and… basically that was about it. The more comments you had the cooler you were.

We of course had an inbox where anyone could message us and boy did people love to message. I cannot tell you how many creepy fat bearded men messaged me telling me how beautiful I was. Even though I never actually answered, it was a creepy boost of confidence for my angsty teenage self. Some people took MySpace messaging very seriously though and did answer their messages. Some actually made friends with their new admirers… and others found new boyfriends and girlfriends. Why we trusted men who weren’t wearing polos while holding red solo cups in their picture back then is beyond me.

As the popularity of MySpace grew, so did the amount of stuff you could do on it. One of the many features of MySpace was ‘top friends.’ This was a certain group of people who were featured on your profile page in sequential order of – like it states – your top friends. Of course, creator Tom put himself in everyone’s top friends automatically (what an attention whore), so if you weren’t too computer savvy and into changing your top friends, it was okay because you would always have one: Tom. For those of us who used top friends though, it was a process. You literally would go into your friends and rate them. The thought process usually went something like this: BFF 1, BFF2, BFF 3, friend 4, friend 5, acquaintance 6, acquaintance 7, friend that no one likes 8, etc. You could have as many ‘top friends’ as you wanted. Some attention seeking whores had like 40 top friends. This was the social networking equivalent of when we used to put peoples’ initials in our AIM profiles… Now, we just accept the fact that we have no friends. In fact, we embrace it. How awkward was it when you weren’t in someone’s top friend list but they were in yours… or vice versa. Or when you had to include someone in your top friends even though you didn’t like them. And picking the order? When did we have to put our friends in order (in public – not just in our heads)?!

You could also really get your personality across in your MySpace prof by decorating your page. This is basically how I became skilled in HTML. You could pick themes with different colors, fonts, backgrounds, etc and post the code in your profile. This is where my skill came in – I used to change the code to my liking. How? I have no idea, because I couldn’t do it now… but back then I was this freak computer wiz. Thanks MySpace! 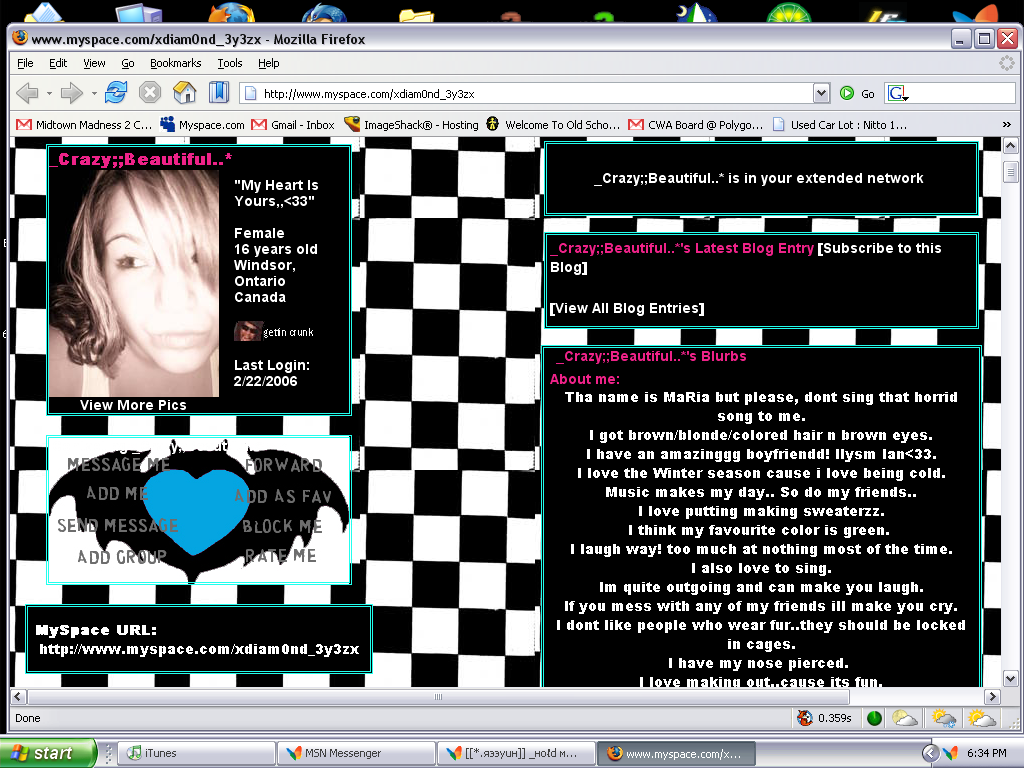 Eventually, you could add music to your page too. AKA you would pick a theme song to play every time someone visited your page. HOW ANNOYING. Because you obv never stayed on someone’s page long enough to hear more than 30 seconds of a song, MySpace forced you to have radio ADD. It was like the obsession with putting lyrics in you AIM profile got to a point where we wanted people to hear the lyrics too. Most of the songs on MySpace profiles fit the teenage angst bill and were either depressing, angry, or chill meaning a song from the 90s that automatically made you cool for listening to it. Imagine if MySpace was popular now… That would be one crazy dubstep show. MySpace was really a great place for music though. I found so many unknown artists and local bands and would of course put this music on my profile page. So scene… so scene.

MySpace of course got phased out by the giant of all social networks Facebook. Originally, Facebook was just for college kids so those not in college resorted to MySpace. Even when FB first started to branch out to high school kids, we still stuck to MySpace and just used both. Facebook was where we housed our reserved, ‘private’ profile that featured pictures of us smiling and drinking… and MySpace was where he kept our pretty, loud, annoying, obnoxious, emo profile that featured pictures of ourselves taking pictures of ourselves by ourselves looking at the camera while frowning or looking off to the side. Even if you took such a picture and put it on Facebook, it would still be called a ‘MySpace pic’ because that’s, like, what they got stereotyped as.

Most of us stopped using MySpace in 2006. Some of us kept it around and secretly updated our pictures just in case anyone decided to randomly creep on us. Some of us kept an account to stalk people because eventually it got impossible to stalk randoms on FB if you weren’t friends with them (damn privacy settings). Other people just couldn’t give up their MySpace using days, so they went as far to make their MySpace profile private (yes, eventually MySpace made privacy settings too) and, like, still used it. For what? I have no idea. But they were still using it circa 2009. In fact, I’m sure there are still people out there using MySpace now… I’m also sure that none of those people are reading this article right now… so that’s good.

Basically, MySpace is a thing of the past now. It is a name that will always go down in history as the sketchiest social media site ever. It might seem hilarious now, but we should all be happy the days of MySpace are over because things really got weird with it. However, the world isn’t much better now anyway (people, like, use Craigslist to find sexual partners) but at least half the population isn’t taking pictures of themselves in mirrors with captions stating how badly they want to slit their or your wrists and/or throat. MySpace was so… bizarre. But even though it failed miserably thanks to Mark Z and crew, Tom still came out with a rather large chunk of change. Not too bad for creating a sketchy ass site and forcing yourself on everyone via Internet friendships. We applaud you, MySpace Tom. But like, what even happened to you?

So 20-somethings… what are your #MySpaceMemories? Tell us in the comments or tweet them at us @forever20tweets!