If you are a true 90’s kid (guy or girl), then you should be able to answer this question in .2 seconds: ‘Nsync or BSB?’

Naturally, my 5th grade self would reply with ‘Nsync… duh!‘ And to this day, my answer remains the same (although I have discovered that BSB’s music was kind of way better).

I think I was pro-Nsync due to the fact that I could dance around my room in front of my mirror to the majority of their songs, whereas most of BSB’s music was made for slow dancing and singing (two things I was not very good at). When Nsync started to take over the charts in 1998, I was swept away. That first CD was awesome. I listened to it over and over and over again until it became scratched and would start to skip every 5 seconds (typical me not taking care of my most valued items – nothing’s changed). 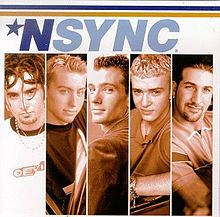 In October 1997, Nsync released one of my favorites, “I Want You Back,” in Germany… However, the  band didn’t become big in the US until 1998 when they released the single here. Of course, their next single, “Tearin’ Up My Heart,” would be the one that would take the world by storm. And let me tell you – that song (and video) took my world by hurricane, tornado, and earthquake… all at the same time. And they didn’t stop there. They released two more singles off the album in ’99: “God Must Have Spent a Little More Time On You” and “I Drive Myself Crazy” (yes – the straight jacket video). They also released a collaboration with Gloria Estefan, “Music of my Heart.”

By this time, we all knew that JT (Justin Timberlake) was dating his fellow childhood Mickey Mouse Club co-star, Britney Spears – who also took the world by storm that year with her single, “…One More Time.” They became the Justin and Selena of our time… except J & B were way more in love and way more talented. I will never forget when Brit and Nsync performed together at the 1999 VMA’s. “Tearin’ Up My Heart” and “…One More Time” together as one = perfection. Oh and just an FYI, Justin and Selena could never give such a ridiculously awesome performance…

The groups success did not stop there. “Bye, Bye, Bye” was released in January 2000 and was the beginning of what would be a year of commercial and critical success for the young artists. The next two singles Nsync released were “It’s Gonna Be Me,” my personal favorite AND the group’s first single to make it to #1, and “This I Promise You,” a slow-dancing phenomenon. The album containing all of these songs, No Strings Attached, was released in March 2000 and sold 9.9 million copies by the end of year, making it the best-selling album of the decade. BSB’s success? Not as good.

Their next album, Celebrity, was slightly different than the others… So different that rap artist, Nelly, was featured on a remix of the track, “Girlfriend” (one of the best collaborations ever). The hip-hop, grown up feel to this album helped us 90s kids transition into the 2000s and “mature” …And by mature I mean not act like annoying 7th grade maniacs anymore. Yes – I was in the 8th grade when the gems “Pop,” “Gone,” and “Girlfriend” were released into the wild. The wild being middle school dances.

Unfortunately, despite the love we held for the band, after this they decided to go on ‘hiatus.’ One they would never come back from. Instead, JT went on to have a successful solo career while putting his dick in boxes and starring in Oscar nominated movies. Lance Bass came out of the closet and went to space. Joey Fatone got fat, lost Dancing With The Stars (where D list celebs go to die), and hosted ‘The Spelling Bee’ (no, I have no idea what that is either). JC Chasez attempted to have a solo career by singing songs like “A.D.I.D.A.S” (All Day I Dream About Sex). And Chris Kirkpatrick became the voice of a character in The Fairly Odd Parents.

My love for Nsync didn’t mean that I was against BSB or anything. Just like I went to Nsync concerts with friends (and my dad), I also went to BSB concerts with friends (and my dad… who once came out singing “I have a headache” instead of “I Want It That Way” … we never saw BSB again). And just like I bought Nsyncs’ CDs, I also bought BSB’s (except for some reason my friends and I would draw mustaches and other “awful” things on our BSB cds, posters, and apparel. This actually made no sense because, umm, our parents went their of our way to purchase the items). I also sang their songs during karaoke at camp and swooned over Brian – yes Brian, not Aaron. However, Nsync was just so much cooler… So much hotter… And their concerts were just so much better.

As you can see, nothing’s changed. Even though I still listen to BSB on a regular basis (I won’t lie), I will forever call myself as an Nsync girl. What about you? Nsync or BSB?