Performance Fleece? I’ll be there at nine!”

Old Navy has had some catchy commercials over the years, but none have been as catchy or memorable as the performance fleece campaign from 1998. 14 years later, I can still sing the song from this video. The great thing about performance fleece was that anyone could wear it. And I know I’m pushing it to say fleeces look good on everybody, but at the time I remember the fleece as an accessible but still coveted and stylish garment. 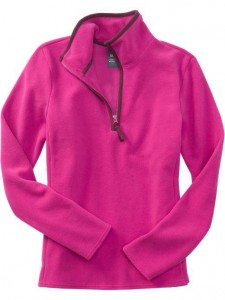 My entire family got performance fleeces for Christmas in 1998. I was in eighth grade that year, and fashion blogs hadn’t been invented yet, so almost everybody I knew shopped at the same stores in the mall. Most people at school got performance fleece over the holidays, too, so you were pretty much out of the loop if you didn’t have one.

Today, the fleece is back in its appropriate place in the fashion hierarchy as acceptable attire for things like hiking, seeing a sporting event, or going to the gym. Sorry, people, but fleece isn’t going to cut it at Christmas parties anymore, but we can just chalk that up to the 90’s being the 90’s.

Did you have a performance fleece in the 90s?

Internet Watch: Why You Should Check Out ‘Audrey’