I was sitting on the couch one rainy afternoon watching VH1’s Best of the ‘90s, just reminiscing about the things that made growing up in the 1990s the best generation out there. From Koosh balls to Britney and everything in between, the people at VH1 know how to bring back such fond memories. It breaks my heart that kids growing up in today’s society have no idea what those are, and their idea of a toy is an iPod, not a Discman. Then they got to the segment about the popular movies. Back in the day (weird how I’m starting to use phrases like that), we had to drive over to Blockbuster to pay $3 for a five-day movie rental. But thanks to things like the Internet, watching my favorite movies has become a lot easier for future generations.

*Note: I was only nine when most of these movies came out, and I didn’t see them until I was “old enough” (by that I mean 13) to actually realize their morals. Maybe that’s because my teenage “generation” didn’t really have such great teen rom-coms as the ‘90s did (aside from Mean Girls, which fittingly was about growing up in the North Shore, a group of suburbs in Northwest Chicago where I’m from). Yet no matter how many American Pie spin-offs or sequels to Bring it On there are, today’s teen movies just aren’t the same. And since American Reunion came out earlier this year, it made me a bit nostalgic to look back at popular teen movies of the ‘90s.

1. Can’t Hardly Wait: Ah, the fateful “last party of high school” tale. Starring Jennifer Love Hewitt, this was where the message “you only live once” that now spews out of today’s youth’s mouths originated. It goes like this:  Joe’s parents are out of town, and there’s going to be a party where EVERYONE is going to be there. Yes, everyone—the nerds, the jocks, and everyone in between. Yet this movie actually teaches us a good life lesson: we don’t necessarily escape the awkwardness of high school when we graduate, from the shy boy chasing the homecoming queen and the nerds plotting revenge against the jocks to that one person that wants everyone to sign her yearbook, and so on. But it does tell us about life AFTER high school, including the fear of moving on and realizing that the people you grew up with are rapidly changing. Oh, and in a blink-and-you-missed-it moment, you may have caught a young Jason Segal as the stoned “Watermelon Guy”. 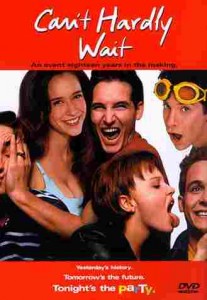 2. 10 Things I Hate About You: I can’t make a list and not include the film that made Heath Ledger famous. Any guy who can pull off the profess-his-love-for-his-gf-on-a-loudspeaker-in-front-of-the-whole-school shindig might have an 11th reason to hate him. And who could forget a baby-faced Joseph Gordon-Levitt, the shy freshman pinning for the popular girl. Now he’s all grown up, but hasn’t lost that cute smirk. Fun fact: both Gordon-Levitt and Ledger starred in Batman films: Ledger in The Dark Knight and Gordon-Levitt in The Dark Knight Rises (out July 20).

3. Cruel Intentions: Okay, so I didn’t see this movie until I was 18 (thanks, mom), but this introduced us to the Long Island, and that infamous girl-on-girl kiss and how conniving Sarah Michelle Gellar can be. It also brought out bad boy Ryan Phillippe and innocent girl-next-door Reese Witherspoon, who became a lovey-dovey (but now ex) couple. And how ‘90s was SMG’s frosted lipstick?

4. Clueless: Like, this movie was SO fab! From Cher’s closet (I mean, who wouldn’t want a computer to plan out their outfit of the day? That would save so much time in the morning…), to the big cell phones and the lingo, this was the epitome of the ‘90s. Cher Horowitz may seem like a ditzy blonde from Beverly Hills, but deep down all she really wants is to help others, fall in love, and make her father proud. Take that speech in debate class—she helped two teachers find love AND boost her GPA.

5. American Pie: The raunchfest begins with this series, from Michelle’s now famous “this one time at band camp” speech to Jim’s, um, infatuation with apple pie. It spawned a plethora of other movies, the most recent bringing most of the cast together again for American Reunion this past April. It’s weird to think all the teens are now grown up and starting their own families.

6. Never Been Kissed: One of my favorites, this is one of the movies that pushed me to be a journalist. Not only does it take place in Chicago, but it led me rooting for Josie Grossie the whole time. And how about her suggestion for a “Millennium Dance”? The Y2K was so twelve years ago. Fun fact: Octavia Spencer, the Oscar-winning actress for The Help, plays a fellow journalist.

7. She’s All That: As soon as I saw this movie, I was in love with Freddie Prinze, Jr. Playing ultimate jock Zack Syler, his smooth moves could have won any girl’s heart. But with a bet with his friends, he has to turn resident geek Rachael Leigh Cook into the prom queen. Too bad Freddie married fellow ‘90s girl Sarah Michelle Gellar, and now they have one adorable little girl. Check out Anna Paquin, aka Sookie Stackhouse on True Blood, as Zack’s little sister Mackenzie.

8. Get Over It: Okay, so not quite a “90s” movie, but it still plays on the same themes. Ben Foster just lost the love of his life to some rock jock portrayed by ‘90s hottie Shane West (with a British accent!), and with the help of his friends, he tries out for the school play to win her back. Co-starring Sisqo (remember the “Thong Song”? Yeah, that was him) and Kirsten Dunst, this flick plays on Shakespeare’s A Midsummer Night’s Dream”.

9. Whatever it Takes: This movie put two of the dreamiest boys of the ‘90s in one great teen classic. Shane West played a sensitive guy in this flick who plays the accordion in his spare time (um, okay), while James Franco played (what else?) the popular pretty boy pinning for Shane’s neighbor. Swoon.

10. Bring It On: “I’m sexy, I’m cute, I’m popular to boot!” Also not technically a “90s” movie, this movie made every girl want to be a cheerleader (or maybe it was just me). Kirsten Dunst ruled the school as Toros captain Torrence, and put the other sequels (should I even call them that?) to shame. Plus, the “Hey Mickey” dance at the end credits was super catchy.

So, 20-somethings… What were your favorite teen movies of the ‘90s?