Fellow twentysomethings, I encourage you all to end your summer exactly the way that you started it: with a figurative bang. Break out those white pants for the final time (if you follow the Labor Day rule), grab your girlfriends (yes, all of them), and head to the theatre; because the last summer comedy of 2012 is coming to the big screen, and it’s calling your name. 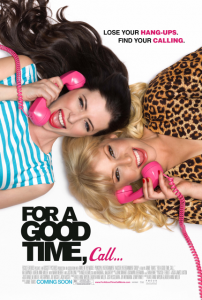 Focus Features presents “For A Good Time, Call…” directed by Jamie Travis from an original screenplay by Lauren Anne Miller (Star #1 of the movie) and Katie Anne Naylon. With a star-studded cast including Lauren Miller, Ari Graynor, Justin Long, James Wolk, Mark Webber, and Seth Rogan, this R-rated flick is a must-see comedy that will have you laughing the whole way through. And judging by the sold-out NYC premiere on Tuesday, August 21, I’m not the only one who thinks so.

The event was held at Regal Union Square Stadium 14 and sponsored by Focus Features, Big Honcho Media, and Grey Goose Vodka. The theatre was jam-packed with celebrity guests including Russell Simmons, Elisabeth Moss, Jonah Hill, and Paul Rudd, all of whom joined the cast and crew at the After-Party hosted at Ajna Bar located in the Meatpacking District.

The contemporary comedy has everything you’re looking for: the humor of Bridesmaids (if you don’t find that movie funny, you need to redefine your humor ASAP), relatable and hilarious co-stars, and a testament to the strength of true friendship. See for yourself.

College frenemies Lauren Powell (Lauren Miller) and Katie Steel (Ari Graynor) didn’t exactly start off on the best foot. Hell, it was a train wreck filled with awkward conversation (So what do you do for fun? Watch Felicity on Saturday nights), the party foul of all party fouls (urine-drenched facial anyone?), and being abandoned on a sketchy city sidewalk (payback really is a bitch).

Through a separate series of unfortunate events (Lauren gets dumped by her arrogant, self-centered boyfriend with no hope of affording their apartment on her own and Katie, well, Katie can’t make the rent), they both have simultaneous quarter-life crises that leave them with no option but to join forces and become roommates. Take Lauren, a cautiously-minded, prude and polished play-it-safer and pair her with Katie, an in-your-face, independent and unpredictable former college party animal. What do you get? A wildly inappropriate plot with a hilarious, A-list cast, that’s what.

Though reluctant at first, Lauren and Katie agree to move in together with the help persuasive banter of mutual friend, Jesse (Justin Long). Lauren’s hopes of landing her dream job are soon crushed when she finds out that the position is no longer available. Desperate to make some money and keep her parents in the dark about her failed relationship/unemployment, Lauren decides to get in on Katie’s private business venture: a phone sex hotline. Katie, who is already in her element, acts as mentor to Lauren; teaching her that going out of your comfort zone can be exhilarating. Katie shows Lauren the ropes, turning her into an overnight phone sex goddess (who would have thought?!). Together, they score regular clientele (one of whom is Katie’s love interest, Sean), major bucks, and an unintentional bond that neither of them saw coming. But as their partnership is just about to take off, Lauren and Katie find themselves at a crossroads that leaves their friendship hanging in the balance. 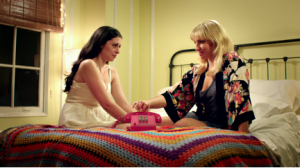 Still not convinced? Check out the trailer: http://youtu.be/zrr2LjFBvyA

FREEBIE ALERT! Enter to win an exclusive For a Good Time, Call… Prize Pack, which includes:

It’s simple! All you have to do is follow ForeverTwentySomethings (@forever20tweets) and For A Good Time Call (@GoodTimeMovie) on Twitter and either 1) Leave a comment at the end of this blog saying you did so OR 2) TWEET it to us. You have until Wednesday September 12th at midnight to enter. The winner will be announced on September 13th!

For more information on the movie, cast, crew, and fun extras, Link Up below:

And don’t forget to see “For a Good Time, Call…” in theatres now!