Last night’s episode of Girls was the definition of cray… if cray even has a definition. There was coke. There was H. There were glow sticks. And there were nipples. And… it was Wednesday. Jessa and Shosh were MIA, but that’s fine because they weren’t needed to get this mid-week bender going. Here’s how it all went down:

Hannah gets a new job.

Marnie’s new job leads to a night with Booth Jonathon.

Marnie’s waitress gig lasts about two seconds before she is whisked away by Booth Jonathon, whose pickup line is a sarcastic ‘I love when people are passionate about something, but give up when they have to struggle.’ Rude, but totally fuck-worthy. Booth Jonathon obviously frequents the rich-people club Marnie now works (or worked) at (because she has to get fired after randomly leaving with a dude in the middle of her shift, right?). Booth Jonathon’s house is obviously creepier than him, with a doll house full of fucked up rooms (one inspired by The Shining with Red Rum written on the walls),  a faux doll that appears to watch Booth Jonathon as he sleeps (and fucks Marnie), and a room with walls made of TVs. Marnie is of course forced to enter the room of TVs and has to watch a Ring/True Blood opening inspired video that plays on a loop to the sweet sounds of Duncan Sheik (Barely Breathing, duh). That video would have been a normal person’s cue to LEAVE, IMMEDE. But Marnie didn’t and instead told Booth he was ‘so fucking talented.’

Elijah and Hannah do coke (for Hannah’s new job).

Elijah, the seasoned coke expert picks Hannah out an outfit. He tells her the mis-matching of the patterns is called power clashing, therefore making it totally trendy and wearable. Yeah, maybe for a size double 0 model… but Hannah? The crop top was a bad choice. After they write article ideas on the wall (which transitioned perfectly into Booth Jonathon’s creepy doll house room with Red Rum written on the walls), they head to Greenhouse to get their club on with Andrew&Andrew who we never actually see. Andrew&Andrew are two gays who are exactly alike and changed their names to be the same person. I would have loved to see them. Maybe next time? 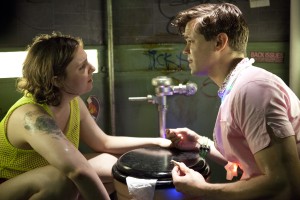 Greenhouse is full of glow sticks and gays (take me there?). Coked-out Hannah starts dancing with a random who she eventually switches outfits with. I’m not sure which outfit was worse. The stomach-exposing shirt or the nipple-revealing tank top with holes in it? Her and Elijah end up in the bathroom doing more coke on the GROSSEST toilet seat ever. It is clear they are on a casual bender. Love it. While there, Elijah tells Hannah (who is wearing a gigantic light up ring) that he fucked Marnie (or did like 2 or 3 pumps) and Hannah goes HAM. They fight their way to a convenience store and Hannah spontaneously kisses Elijah — which doesn’t lead to sex (thank god) — and who comes around the corner? It’s LAIRD! He apparently was following Hannah around all night to protect her. Laird starts crying, calls Hannah pretty (and he’s not on anything?), forces them to take his ‘H’ (which Elijah obv rips out of his hands), and heads with the pair to Booth Jonathon’s so Hannah can yell at Marnie.

Everyone ends up at Booth J’s.

Why Booth Jonathon let Hannah (who’s nipples are showing), Elijah (who is too gay to function), and Laird (what kind of name is that?) into his house, I have no idea… but whatever. They’re just Marnie’s group of eclectic hipster friends. Totally normal. Hannah goes on a really angry, deep rant to Marnie about the fact she fucked her ex and makes her cry. Hannah tries to cheer her up by saying, ‘we can keep being friends, just as long as you know you’re a bad one.’ Isn’t that like already the case? Before Hannah leaves to go have a one night stand with Laird (who I don’t think has ever kissed a girl before), she tells Elijah he’s moving out. Noooooooo.

The best part of it all is that it was Wednesday. Good to see some people are still having mid-week fun post-college (RIP Blackout Wednesday). I think I’ll go to Brooklyn…

10 Topics To Bring Up When Things Get Awkward