It was all a dream…

Or was it? After watching this episode, I had no idea how I was going to recap it. It was by far the weirdest, most bizarre thing I have ever seen on television. It was totally random, dark, and satirical. And although it was completely out of place, I applaud Lena and crew for trying something new and throwing us off guard for a bit. But, like, I hope they don’t do it again. That was def a one time thing.

When Hannah entered the random man’s house and said she felt like she had just stepped inside a Nancy Myers movie, I had no idea we were about to actually witness a Nancy Myers romantic comedy that would soon turn into a dark Lifetime movie (with multiple appearances by Hannah’s tits). If you haven’t seen it yet, let’s just say – it wasn’t your typical Girls episode.

First of all, what was Hannah wearing? It was kind of like a romper, but it wasn’t because the top was tied to expose her stomach… meaning the shorts and top were not connected. They just matched. Wtf. It was unattractive and unflattering… AKA typical for Hannah.

It also made no sense that Hannah would score a man in such an outfit. She went to his extremely nice townhouse to apologize about putting the coffee shop’s trash into his trash cans… and instead of getting mad at her, he thought it was funny. Long story short, she kissed him… and he kissed her back… and then they had sex. And then they went on a serious ‘sender,’ aka a sex bender. Hannah coined the phrase (kind of) ‘sexit,’ which is a sexy exit from a party aka when you leave to have sex, earlier in the episode… so this saying is only appropriate.

42 year old Joshua (not Josh — JoshUA) didn’t learn Hannah’s name until after they had sex, but this was okay because he proceeded to make her steak. While the steaks were grilling, Hannah learned that Joshua is a married doctor whose wife moved to San Diego because she couldn’t handle the city. After lunch or dinner or whatever it was, you would think that Hannah would leave… but she doesn’t because Joshua begged her to stay. Literally begged. Like told her she’s gorgeous and stuff. THIS HAS TO BE A DREAM. RIGHT? RIGHT?! 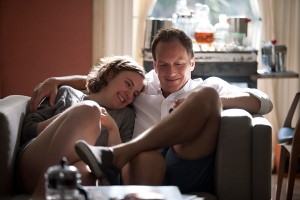 They had sex again in bed and even though it was still extremely awkward it didn’t seem awkward compared to all the other sex Hannah has had on the show.  However, those tits have got to go… or grow. I know she’s just showing what a real person looks like… but… no. When they woke up the next morning, Joshua exclaimed that he took off work (even though he’s, like, a doctor) and told Hannah to take off work too. They then spent the day playing naked ping pong, which is not okay by any means, and having sex. Ugh. Girls is actually the only show on television where guys (and girls) complain about a girl being naked. And yes – most actually complain.

The episode was shot like a terrifying/romantic Lifetime movie and featured the most ridiculous music ever. When the camera started zooming in on their facial expressions of boredom on the porch, I lost it. Like, WTF was going on?! 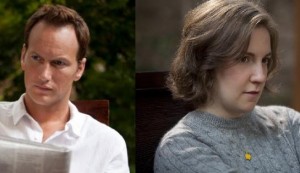 Also, did anyone else think Joshua was going to kill her after she passed out in his really nice shower and woke up to him petting her wet head on the bed??? Like, what the fuck was that? A dream! A DREAM I SAY.

But it wasn’t. Hannah ruined her ‘sender’ when she started crying about how unhappy she was. She said she wanted to be able to have experiences (like this one) for everyone’s entertainment, but she also wanted to be happy. A writer’s demise. You can’t have both! Duh.

After Hannah’s emotional breakdown, Joshua told her he was going to work — therefore, ending the sender. For some reason, Hannah stayed for a bit after Joshua left for work. She ate some food, read the paper, casually lounged all over the place, and then eventually left. After throwing trash away in his garbage bins of course.

Seriously – what the fuck.

Anyone? Anyone? Did we just watch 30 minutes of ridiculousness to get the memo that Hannah Horvath has officially cracked? Or did we just see an epic portrayal of how single twentysomethings feel on a daily basis? Was this supposed to explain why Jessa made a mistake marrying Office Rhodes (because we already got that)? Also, why is/was Ray so angry? Is he always like that or did he just have a fight with Shosh? Guy is tapped. Anyway – what are you thoughts? Did you love or hate this episode — because I am honestly not sure how I felt about it. Leave it in the comments!