The show opened with Jay-Z and Beyonce performing Drunk In Love… because, you know, no one cared if it was all downhill from there… which it was… because let’s face it – Jay and Bey are queen and king of the music industry. Okay, maybe other performances were good too, but did they make me wet? No.

Taylor Swift got down. #Surfboardt

Macklemore won best new artist, even though Kendrick Lamar should have won. Which Macklemore texted him and Instagrammed to the world as proof. Side note: How does Macklemore have 1133 unopened text messages? Stars: They’re NOT like us. 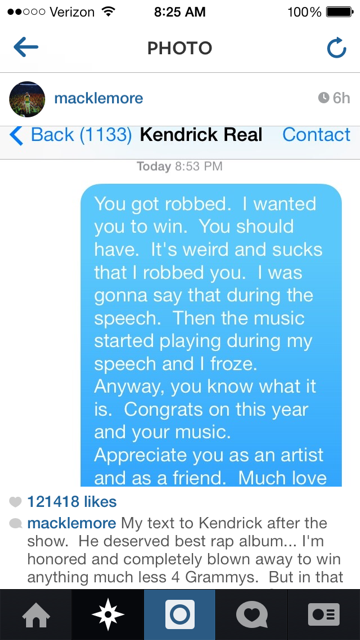 The Lorde performed next. She really got into her music. Convulse one more time. (Also – she did NOT get that blowout at Drybar… Just sayin’)

Katy Perry and Juicy J turned the stage into a scary dark forest for Dark Horse. Remember when Katy used to wear rainbow colored clothing and put whipped cream on her tits? Because apparently divorce turns you goth. I do love me some Dark Horse though. I just kinda wish stick ponies were involved.

After being groped by Miley at the VMAs, Robin Thicke was like I should redeem myself and perform with Chicago at the Grammys, so that he did… and it was kind of boring and nothing too exciting to talk about. YOU NEED DA FOAM FINGER ROBIN. YOU NEED IT. LOOK HOW MUCH IT DID FOR YOU. Any talk is good talk.

To keep the show from getting boring and to keep ratings up, Beyonce and Jay-Z should probably have periodically performed throughout the entire night. Just a thought.

Then came Taylor Swift who, like Anne Hathaway, I am usually like GO THE FUCK AWAY. But during the Grammys, she sat down with a piano and had an unreal performance. Like, I was blown away. As was her hair. Loved that blowout. BUT ANYWAY, sorry Taylor but Beyonce had the best performance OF ALL TIME. You keep whipping that hair back and forth though. I loved it.

After her performance, people stood and clapped and she just looked at them. It was weird.

Pink started spinning around mid-air next and I got a bad case of vertigo. Where were her acrobatic talents when I saw her in concert in the 8th grade? Abs for days. This performance got me thinking about the person Pink used to be. The one who sang There You Go and Most Girls… and Just Like A Pill. Missundaztood was a classic album. But just like I’ve grown up since middle school, so has she. Props for still being relevant and well respected with the name “Pink.”

Holy Grail wins (duh) and Jay-Z and Beyonce hug… and Jay like touches Beyonce and I squirm. IT’S SO REAL.

Justin was no where to be found, but Jay said the Grammy was going to be a gold sippy cup for Blue. He even turned it to it’s side to show everyone that it CAN be a sippy cup. Can we talk about the fact that Blue Ivy is Jay-Z and Beyonce combined. COMBINED. Like, how many Grammys will she win one day?

Kendrick, who was snubbed, then performed with Imagine Dragons and Taylor Swift stole the show. The whole thing went into slow motion and it was just Taylor dancing away. Her idol is actually Biggie Smalls. Don’t know if you knew that.

Next, neon light up cacti (that’s plural for cactus) took the stage with some brown haired fake-nice girl that reminded me of that bitch who plays Layla Grant on Nashville. I did like that dress though. And I want the cacti for my next Cinco De Mayo party. As well as her sparkly cowboy boots. Anyway, country, boring, next. 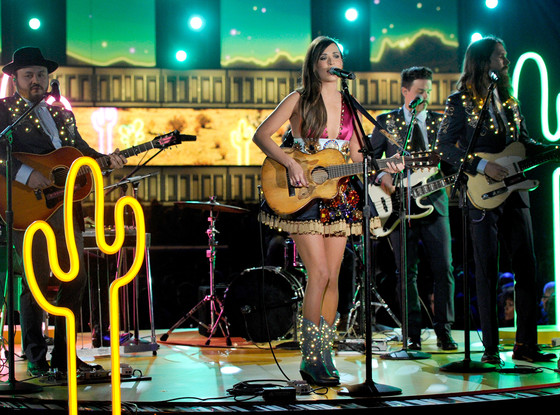 Sir Paul McCartney and Ringo Starr proved once again the Beatles are superior to all mankind… except maybe Jay-Z and Beyonce because well… JK they are Paul and Ringo. AND THEY ARE IN THEIR 70S. Props.

Yoko Ono got down.

Daft Punk and Pharrell performed with Stevie Wonder and it was great. Pharrell’s hat stole the show though. 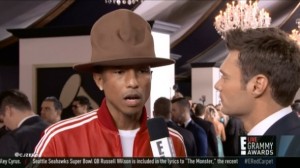 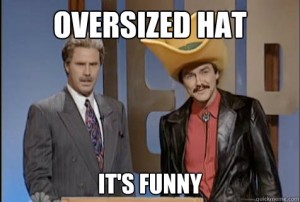 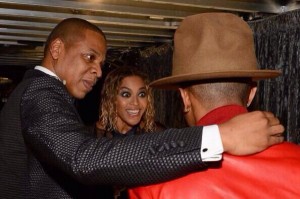 Meanwhile, Steven Tyler was in the audience mistaking the Grammy’s for a Bar Mitzvah. CHA CHA CHA.

When Cyndi Lauper came to the stage to present, I realized she looks a lot like Snooki. Like a large Snooki. IDK if that’s good or bad. 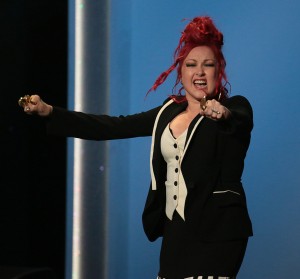 Carole King and Sara Bareilles performed together and it was, like, “really sweet.” Sara seems like a really “nice girl.” Which may attribute to the reason she hasn’t achieved huge huge fame yet. Like why isn’t her face covering magazines? BECAUSE SHE’S TOO NICE. She also looks like a friend you would have from camp if you were Jewish. 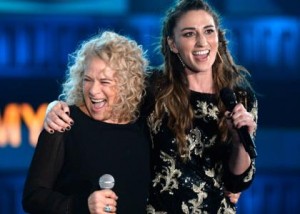 Macklemore did Same Love and a whole bunch of people got married. So if you skipped the Grammys to watch that Bachelor wedding, WE GOT TO WATCH A WHOLE BUNCH OF WEDDINGS. SO THERE. Oh and then Madonna came out. #SoRaNdOm. But for real – so many feels. So many. 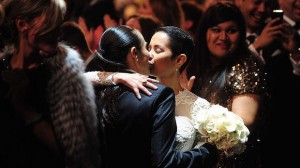 Daft Punk won best album and embraced in the best hug ever. FOUR FOR YOU DAFT PUNK. YOU GO DAFT PUNK.

So with the exception of like Willie Nelson singing, Metallica introducing kids to the original dub step I mean noise, and some other randoms performing and getting awards, that was the 2014 Grammys. And I’ll say it again — Kendrick got SNUBBED. Perhaps they should consider having two rap sections next year… “Pop Rap” and “Real Rap” because… I mean… COME ON.

Productive Procrastination: How To Not Feel Guilty About That Thing You Really Don’t Want To Do 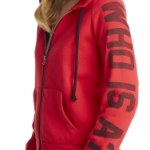