Halloween is upon us and whether it begins for you on Wednesday (too hardcore for me – we’re not in college) or Friday, you either (hopefully) have your costume ready to go OR are itching for an easy  idea because you are way too busy with work to even think of a costume. This past weekend, I ran around trying to find the perfect pieces for this year’s Halloween costumes’, and was actually successful. However, I know not all of you did that and some of you still have NO idea what you’re going to be… but you need to think of something easy and clever – FAST. That is where we come in. Below are an assortment of Halloween pictures – some sent to us by readers and others brought to FTS by yours truly. I hope the following pictures and ideas help some of you think of an idea for this weekend! Enjoy! And leave any ideas for costumes you have in the comments! 🙂 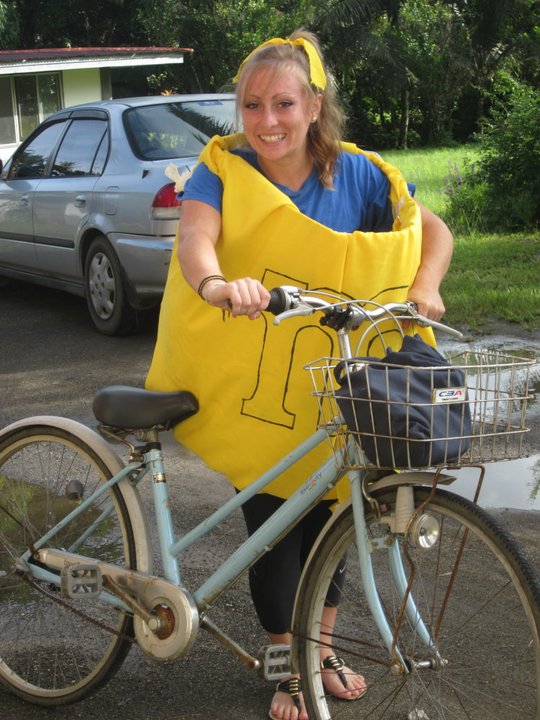 This picture was sent to us by Kara, who spent last Halloween on a small Micronesian island while working in a world teaching program. She says about this costume: “So last year I decided to bring halloween to the island, and without an iParty, I resorted to taping together all of the UPS priority mailboxes that had been sent to me to and covering it in yellow fabric to make an M&M. After, I rode my bike around the island in the cardboard box gettup.” Kara proves you can creative even when you pretty much have nothing (No iParty? No problem). 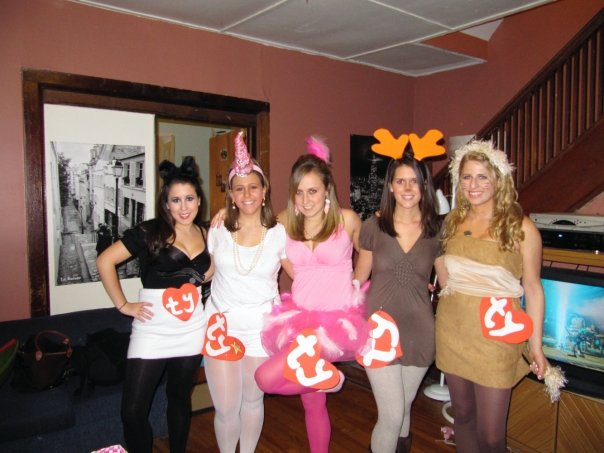 Senior year Halloween, one of my many costumes was as a Beanie Baby. I was a unicorn, so I covered myself in glitter, created a horn with construction paper, put that horn on a headband, made the TY heart tag, and was ready to go! Easy success. 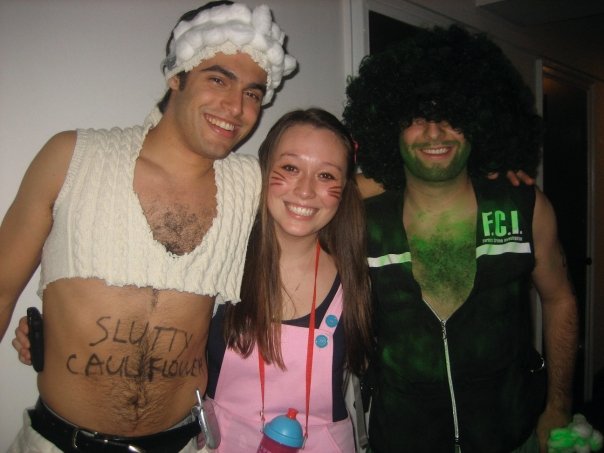 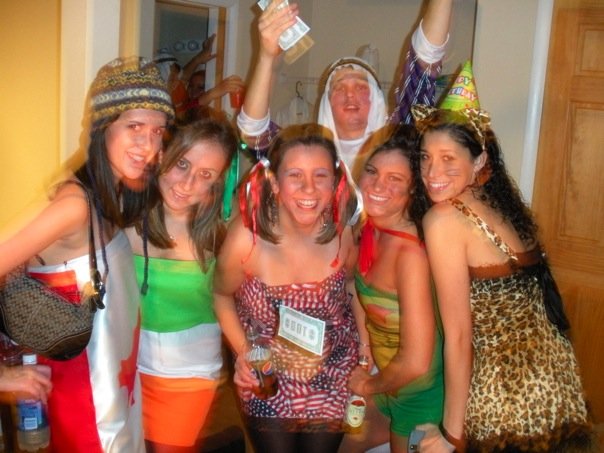 This is one of my favorite pictures… mostly because of the flying money, but also because of the creativity! My friends and I were countries one year (I was America), and we bought flag fabric from Walmart and wrapped it around ourselves to make a short dress. Also featured in the picture is “Arab Money,” a ninja turtle, and a party animal. 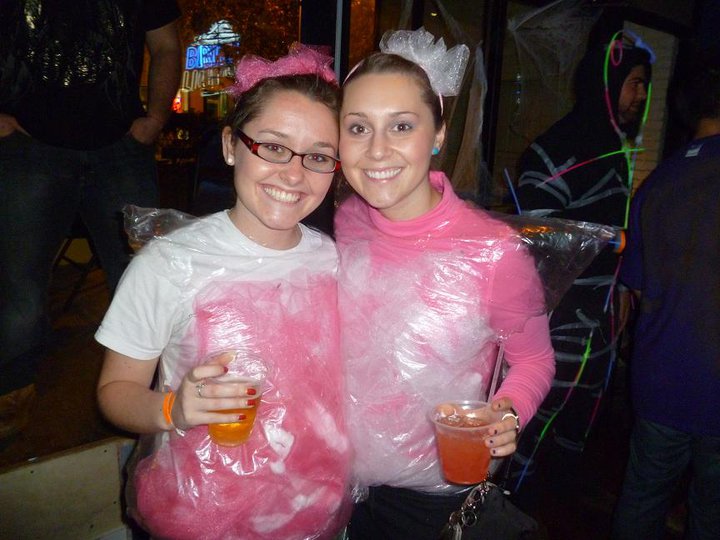 This cute costume idea was sent to us from Tori. She said it was pretty easy to make – “We just bought some tool and hot glued it to a garbage bag. Although I should advise everyone, wearing a garbage bag in a hot crowded bar makes you want to pass out.” Love the idea. Maybe you creative twenty somethings could find a way to make it “cooler.” 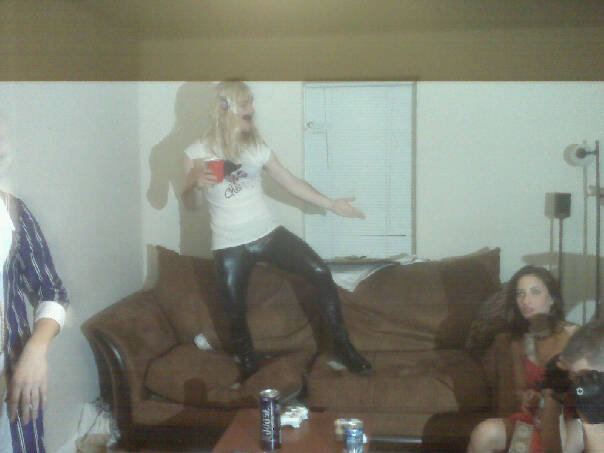 Ohhh, one of my favorites. This is a male dressed as Miley Cyrus. Tight leather pants. Little white shirt. Blonde wig. Done. 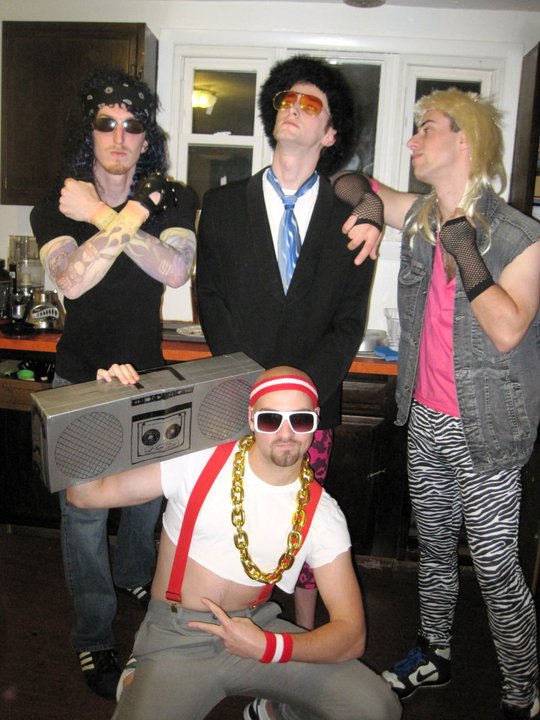 This 80s rock band was comprised of 4 college seniors… and if this picture looks familiar to you, that’s because it was seen on Stool La La (RIP). I think this is pretty self explanatory… Just find ridiculous items of clothing, put them together, and go from there. A trip to the Garment District or your parent’s attic (70s and 80s attire) is prob necessary. 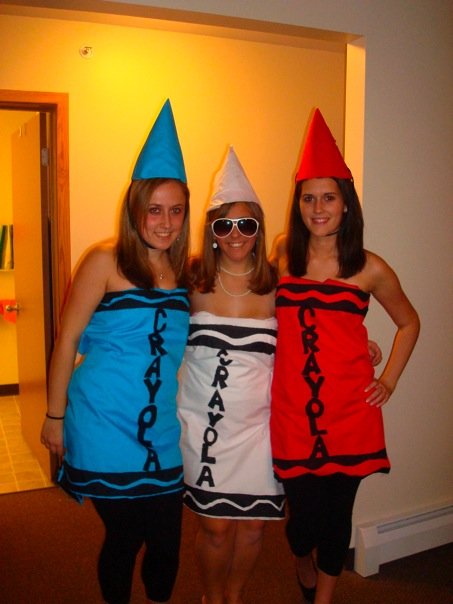 Ahh, crayons. This was my junior year of college. Cute from the front – not so much in the back (we had “sexy” color names). Basically, we bought different colored pieces of fabric, cut them, wrapped them around us and pinned them together, and made a pointed hat from construction paper. Suggestion: I was the white crayon and looked like I was a KKK member (I wasn’t), so I don’ recommend being the white crayon… 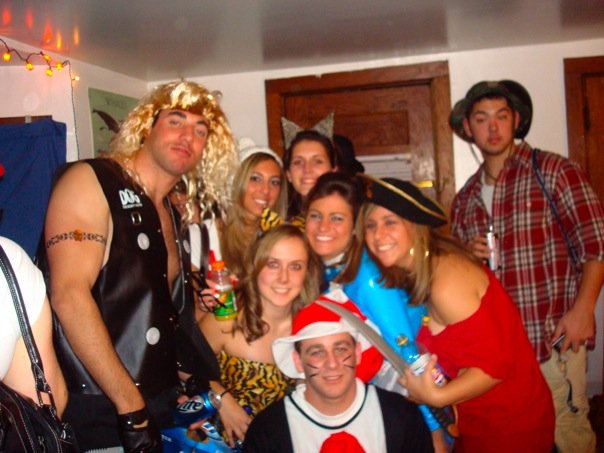 Other easy costume ideas include a cat, a football player, “risky business,” a student/teacher, a tennis player, and an 80s person (aerobics instructor or MJ). All can be done without have to buy much, if anything at all. Go through your closet. Go through your attic. Maybe even break out the old dance costumes if you have them (I’ve done it). Get a little creative. It will be worth it! HH, twenty somethings.