I was never thin. Unfortunately, I got a gene where my thighs were going to be perpetually large and my weight (anywhere) was going to be extremely hard to lose. I spent years watching my weight fluctuate, but I always payed attention to the scale and tried to be active. However, senior year of high school, I was introduced to alcohol and late night (drunken) snacking… and it was all down hill from there.

Sure, I was exercising. I was a cheerleader and had to run, condition, and lift people on a daily basis… But by the end of Senior year, I had gained about 20 pounds from what I was Sophomore year. That Summer didn’t help either. I was going out literally every single night (either drinking, eating, or both), soaking up all the fun I could have with my friends before we had to say our pre-college ‘goodbyes.’

When I got to college, the drinking continued, as did the eating due to the gross, disgusting dining hall that served French Fries (my weakness) on a daily basis. I didn’t bring my scale to school, so when I arrived home for Winter break and saw how much weight I had gained that semester, I was absolutely disgusted with myself. Even though I literally went to both the gym and cheerleading practice for a good 3 to 4 hours every day, I still managed to gain an additional 10 pounds. My highly active routine just wasn’t working, so I knew I had to make a lifestyle change… and I knew I had to do it now. 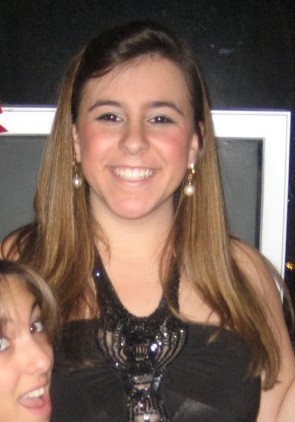 I went back to school with some lean cuisines, absolutely NO diet pepsi (which I used to be addicted to, but would never drink ever again – except when mixed with the Captain), and a need to change… Because of this, I ended up losing around 6 pounds that Spring semester. That Summer I made it my mission to lose a legitimate amount of weight – as in look like a new person.

Nearing the end of June, I went out to eat for what would be the last time for the next two months. I banned myself from alcohol, french fries, pizza, and basically anything else that was unhealthy (meaning I was also banning myself from having a social life, because we all know being social means either eating, drinking, or both). I would have a fiber-filled breakfast every morning, fruit and yogurt for lunch, and grilled chicken and veggies for dinner. As the Summer went on, the portions I was eating got smaller, the distance I was running on the treadmill was growing, and the number on the scale was decreasing. However, my ‘diet’ wasn’t as easy and as healthy as I thought it was in my head.

As Summer came to a close, I was finally heading back to school for Cheerleading pre-season. I was excited to show off my ‘new’ bod and just how in shape I was. Once I got there, I showered in compliments (as planned) and it felt great. The ‘you look amazing!’s‘ and the ‘you lost weight!’s‘ made me want to lose more. And I would do anything (yes anything) to shed the pounds.

Soon enough, the healthy fiber-filled lunches I had been having all Summer had turned into Slim Fast meal replacement bars… and the healthy dinners that my mom grilled for me all summer had turned into low calorie lean cuisines. I thought I was in much better shape, but lifting girls at cheerleading practice was harder than it ever was before. I knew I wasn’t eating enough… but I didn’t care.

It wasn’t until I began feeling light headed and dizzy with the occasional headache (and excessive worrying after I would eat, let’s say, a bagel) on a regular basis that I decided I needed to make yet another lifestyle change. I knew I needed to stop obsessing over calories. I knew I needed to stop talking about my workouts. And I knew I needed to eat more if I wanted to keep the weight I was losing off for good. It took a while to get back on track… But once I did, the pounds slowly started coming off and staying off.

During the above journey, I learned a lot about what to tell yourself, what to eat, and what to do to lose weight. After Senior year of college, I had gained about 10 pounds back since I stopped trying to lose weight Junior year.

Of course I waited until after the senior week festivities (aka the reason for the majority of pounds I gained) and until I arrived home with no job to start focusing on running and eating right. I then lost the 10 pounds and more… and am currently at the lowest weight I’ve been at in years. I would definitely like to lose maybe 10/15 more pounds (wouldn’t we all?), but for right now I am focusing on maintaining my weight and staying healthy!

Here are some things I learned on my weight loss adventure. If you are trying to lose weight, these things worked for me… and I hope they would/will work for you too!

Crash diets do not work in the long run. Lifestyle changes do. This is probably the most important thing to tell yourself while dieting. While you may not be able to lose 10 pounds in a month or 2, once you do lose the wieght the healthy way you did it will feel amazing.

Hunger passes. When I first started my ‘lifestyle change,’ I constantly told myself that hunger passes. No, I didn’t tell myself this every time my stomach growled, but when I got hungry a few hours after eating a filling breakfast, I forced myself to wait to eat until lunch. After doing this for a while, I stopped getting hungry as often.

Grilled chicken and grilled veggies FTW. When I lived at home, I was lucky enough to have a mom who LOVED grilling food every day during the summer. She would grill chicken, turkey, steak, and anything that was healthy and serve it along with grilled veggies.

Soda is the devil. It really is. A lot of people say if you stop drinking soda, you will automatically lose 10/15 pounds. And guess what? It’s true! I lost about 5 pounds just from saying goodbye to soda. I now only drink water (not even coffee).

Running > Eliptical. I always felt active when using the elliptical, but I wasn’t sweating nearly as much as I did when I ran. As soon as I switched to running, the pounds came off so much faster.

If you’re hungry to the point of passing out, eat something. Do not starve yourself. Of course your weight will decrease, but it certainly won’t last… and it’s certainly not healthy. Your body clings to fat when it’s hungry… so don’t let yourself starve!

Beer is bad. Beer bloats you. It’s filling. It just makes you feel fat. Hard liquor is your friend during weight loss – if any liquor is going to be your friend at all.

Going out to eat is a setback. When I really lost weight, I stopped eating out. And when I did start to go out again, I got salad with dressing on the side… or a hamburger with no bread and veggies instead of french fries.

You may have to sacrifice your social life a bit. Obviously drinking is not good for you when you’re trying to ditch weight. And obviously the food you will inevitably crave the next day when hungover is not good either. Staying in often is key when you’re really trying to lose weight and exercise on a regular basis. You really won’t regret that month or two you took off from going out when you’re a size smaller and getting hit on by a million guys or girls at the bar.

Eat what you want, but less. It’s all about portions. Of course you’re probably used to big ones, but less will fill you up too. I eat small meals every 3/4 hours every day and it works. At least it does for me.

Pay attention to calories, but don’t obsess. I obsessed and it took over my life. It was all I cared about and all I talked about, and I know it was annoying to everyone around me. I now pay attention to what I’m eating, maybe count in my head to keep track (I try to stick to 1400 a day or less – but definitely stay below 1600), but I do NOT write down my calories and count them religiously. And I do NOT update everyone on my workouts and my daily diet. If you really feel the need to talk about your diet, join weight watchers… and if you really feel the need to talk about your workout, join a fitness club… OR you could blog about it (someone out there will care)!

Alternatives to the 9-5: Smokey-the-Bear-Style Seasonal Employment