For the past month and a half, I have been banned from the gym. No running. No lifting (not even my little 8 pound weights). No crunches. No stretching.

For the past couple of years, I’ve ignored issue after issue in my body. I was taught to suck it up and work through the pain, so that’s what I did. For example, if my leg hurt, I would run until it didn’t. I thought that because my leg felt a little better after the run, I made a good choice to work out… and if it started to hurt again, I was of course going to run. If my back hurt, perhaps I would take some advil or use some ice… but the majority of the time, I would ignore the pain because I was really too busy to treat an injury.

In college, I made it a point to get to the gym almost every day. This was due to the fact that I was always trying to work out… and that I loved the social hour (or two) that was the college fitness center. In addition to this, I had Cheerleading almost every day. My body was constantly moving and I was constantly busy running on no sleep. I had no time to be hurt. The first time I had to avoid physical activity was Senior year of college. I couldn’t stretch for the life of me. I eventually headed to a local chiropractor and told them I needed this problem fixed ASAP because I had to get back to practice. The guy wasted no time and adjusted me. I could finally stretch again! And despite his advice to come back to his office once a while and lay off the extensive exercising, I ignored it and went back to my crazy schedule. 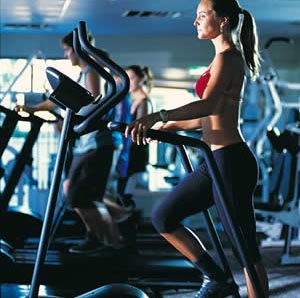 Flash forward two years later and I’m right back where I started – except in a far worse situation than before. A few months ago, I woke up with a hurt neck. I couldn’t turn my head to the left without losing my breath. I even had to stay in on a Friday night to deal with the pain, hoping that relaxing it would make the pain go away. Once I felt slightly better, I was off again to the gym. However, a few weeks later, the pain struck again – except this time in my lower back and legs. Similar to what happened Senior year of college, I couldn’t stretch and I had a sharp pain occasionally running down my leg. I thought one trip to the chiropractor would fix the problem and I would be back at the gym in no time. Unfortunately, I was wrong.

After a few visits to the chiropractor and some x-rays, I learned that my neck was going in the complete wrong direction, making my head weigh about 50 pounds more than it’s supposed to. I learned that my legs are different lengths, making it hard (and awkward) to walk. I also learned that this is all effecting my lower back and legs. And by myself constantly ignoring the pain, I’ve only made it worse.

The chiropractor requested that I lay off the gym and any physical activity (including stretching) for a month or two (depending on my progress). I also now have to get to their office ‘as much as I can.’ And with such a busy schedule, it is hard enough to get there once a week. However, I am looking forward to feeling normal again. For instance, my back hurts right now as I sit here and write this article. Soon enough it hopefully won’t.

In the meantime, I have been attempting to ignore the fact that my arms and legs are losing muscle and the like. When I used to take a few days off working out, I felt gross and disgusting – and usually became unhappy. As told to us by the great Elle Woods, ‘Exercise gives you endorphins… and endorphins make people happy! (?).’ So it has been pretty hard not letting the lack-of-physical-activity effect my mood.

How have I been dealing with it, you ask?

Even if I wasn’t banned from the gym, I definitely would not be working out as much as I used to. I work over 40 hours a week – sometimes weekends. And I have to dedicate the small free time I have to other things than only the gym. I’m sure that it is the same for a lot of you – and it’s definitely a hard transition. But as long as your getting in some good physical exercise at least 3 times a week (unless you’re on ‘bed rest’ like me), you’re fine! Just make sure to stick with the 5 steps above to keep a happy mood and healthy lifestyle even when you aren’t hitting the gym as much as you’d like.