Breaking news! This just in! Never-before-seen coverage! Hurricane Sandy(don’t quote me on the exact name) is said to have brought its wrath to the Northeast Coast. You would think between social networking, news channels, and neighborhood talk I would be able to find a more detailed analysis of the storm itself, but Tweeting/Facebooking is at an all-time low. Absolutely no reports have been made regarding #losingpower. My newsfeed isn’t filled with photo booth pictures of girls “drinking the storm away with wine.” Social media as we know it has gone rogue.

All jokes aside, thoughts and prayers go out to everyone affected by this storm. Stay off the roads, keep your batteries charged, and check the news daily for updates on the weather in your area.

Hurricane Sandy is here, it’s real, and it’s no joke. Along with heavy winds, flash flooding, power outages, and mass panic, this storm has caused an overwhelming surge of cabin fever. We’ve all been through it before for one of two reasons: 1) Some unearthly illness has entered your immune system and made camp for a few days, or 2) Inclement weather makes it just that dangerous to stay anywhere but indoors. We all know who the culprit is in this case (#2, for those of you who truly live in a black hole). 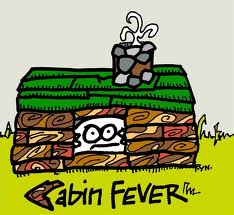 The Cabin Fever Effect is one that I can’t quite seem to escape from or understand. It takes shape in the following five stages:

We are awaiting the storm’s arrival like Santa Clause on Christmas morning (Adult version: Waiting for our bf/gf to get back with Friday night takeout). We listen ever-so-intently for the tell-tale sound of a falling branch. We glance at the window every 30 seconds to monitor the amount of rainfall hitting the ground. In other words, we’re ready to hug the shit out of this storm.

NO.WORK.TOMORROW! Snow days were awesome back in high school, but what were we really taking a day off from? Three back-to-back study halls? Crappy cafeteria food? Nope, a grown-up snow day sounds much better. The office is closed, The Office is on, and the junk food/sweats combo is totes appropriate.

So…this has been cool. But I mean, exactly how many episodes of Revenge can a person watch in one sitting (I counted. It’s three). And let’s say Netflix didn’t lose its charm yet, but your electricity did. What’s a twentysomething to do then? Playing hide-and-seek in the dark with your family is fun for like, 13 minutes, but you’re not a teenager anymore and fitting inside the laundry basket is no longer a game-winning option. And now you’re bitter about it.

What did people do before the Internet? You’ll ask yourself this question over and over again until you look over to find your Dad playing solitaire with a flashlight. You’ve never wanted to be outside more. Suddenly, you wish that it will all be over. Who cares if I have to go back to work? At least I’ll be able to Tweet from a well-lit room where I can interact with other human beings while Youtubing videos of “people falling down stairs.”

BZZZZ goes your 7:15AM reminder that work is back on. RING goes the office phone that won’t stay silent long enough for you to choke down your cold oatmeal. CHA-CHING goes the cash register when you buy a $12 lunch that should really only cost $6. SHOVE go the subway lurkers who shake their cups for “any spare change?” Yeah, everything’s back to normal.

We pray for the conditions that cause cabin fever, yet we absolutely cannot stand its repercussions. This idea perplexes me greatly (obviously; I’ve been writing about it for the past hour). I have no advice or suggestions for you besides the cliché, “be careful what you wish for” phrase that will most likely lead to a decrease in ForeverTwentySomething followers if I were to ever use it sincerely.

What I will say is this: enjoy the spare time while you have it. So what if you have cabin fever? You and I both know it’s not going to last forever. The MTA will lift its suspension, you will receive an office-wide email stating that work will resume the following day, and life will go on even when your iPhone battery life is down to that last 3%. If your current problems consist of trivialities such as the ones I’ve listed, consider yourself extremely lucky. At this very moment, there are people who have to evacuate their homes and leave their precious belongings behind. There are houses, streets, and entire towns that are submerged underwater with no immediate sign of safety. There are those whose lives won’t return to normal after Hurricane Sandy leaves its mark. Be thankful that you escaped with a minor case of cabin fever.

Things Not To Do During Hurricane Sandy

How To Have A Successful Adult Halloween