There  are a few scientific facts about summertime in America…the days get longer, the tempurature increases, and BBQ will be consumed (sometimes in disgustingly large quantities that we may be ashamed to admit afterwards). That being said, you’re going to learn a little bit about this cuisine so you can have a newfound appreciation for it next time you have it on your plate.

The term Barbecue (And all the other spelling variations) used to be a very specific way to cook tough meat, but over the years the word has changed to incude an actual event with meat, potato salad and the other typical side dishes. But the BBQ you may be thinking of with burgers and hot dogs isn’t actually Barbecue…it’s grilling. The main difference is that flames come into direct contact with the meat during grilling, whereas in BBQ it’s the indirect heat that cooks the meat over a long period of time. If you find yourself getting confused about which one is which, just remember this phrase for BBQ and you’re golden:

The science behind this is that when you have tough meat and cook it a low temperature over a long period of time, it breaks down that tough tissue in the meat and you’re left with really tender, great tasting meat. If you’re really interested you can get really detailed and scientific with this, but we’re just looking for the sparknotes right now. 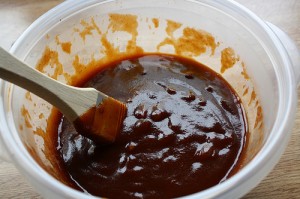 Discussion about BBQ wouldn’t be complete if we didn’t talk about the sauce. A huge component of the meal, I originally just thought BBQ sauce was BBQ sauce and that was it…but I could not have been more wrong. BBQ sauce is essentially a different combination of a select few ingredients (it’s sort of like the way Mexican food is just different combinations with meat, cheese, and beans)…and depending on the amount of each ingredient you can tell where each sauce is from. The most popular ingredients are vinegar, tomatoes, sugar and spices.The big ones that we’ll be covering are Kansas City, Carolinas, and Texas even though there are many, many more.

Kansas City – When you think of BBQ Sauce, you’re most likely thinking of this one. This is the one that’s essentially ketchup with sugar and spices to give that signature sweet and tangy taste and is by far the most widely sold type. It’s thicker than the Carolinas sauces and more similar to the Texas tomato based sauce.

Carolinas – The unique aspect of the Carolinas sauce is the vinegar, it adds more of a bite that you’ll notice when you first have it. Once you get more detailed in the specific regions within the Carolinas, you find differences such as South Carolina’s use of Mustard, or East Carolina’s not using any sugar.

Texas – As was mentioned before, Texas is more similar to the popular Kansas City sauce because of the tomato base even though it’s a little bit thinner and uses different spices. Taking from the local spices and incorporating into the BBQ Sauce such as cumin and chili, the Texas sauce is unique. Similar to the Carolinas…Texas also has a great amount of varied sauces based on where you are in the state as well.

I Am Woman: Francine Wheeler