People have a lot of preconceptions about the type of person who rides motorcycles; a big burly guy covered in tattoos, the rebel bad boy of the local town, or those who wear an unnecessary amount of leather…either way, the point is that most of us have an image conjured up of those who ride motorcycles. Since I don’t fall into any of these personas a lot of people are surprised to learn that I actually have my motorcycle license. Now before I learned about these bikes…when I saw a motorcycle it basically fell into two categories for me:

2.) Looks like it should be in a Fast & Furious movie.

But with today’s article you’re going to learn a bit more about these machines…because let’s be honest, motorcycles are pretty manly.

If you’ve ever heard anyone talk about them, you might have heard the term “CC”. Now when I was first learning about them, I had no idea what the hell CC’s were, why I should care, or if it was good or bad for a motorcycle to have them. The term CC is referring to the Motorcycles engine and stands for Cubic Centimetres. We can get really detailed and technical into what it means but that’s not a good use of your time right now (We are busy FTSMen after all), so I’m going to give you the short and sweet version of what you have to know about them. All you have to remember is this:

“The more CC’s, the more powerful the engine is.”

Now that you know a 750 CC Honda Grom motorcycle is more powerful than a 250 CC motorcycle, it’s time you learned about the types of motorcycles. Now to be clear…there are many, many more than what we’ll go over, but these are big broad categories. We’ll be covering Cruisers, Sport Bikes, Touring, Sport Touring, Standard, Off-road and Dual. All of the bikes, except for Off-road, are street legal.

Cruisers – These are the motorcycles you look at and think Harley Davidson. These are big, heavy, and loud. When you think of the motorcycles where the person is sitting far back with their arms up high, that’s a chopper, but still falls within the Cruiser category. Cruisers started in the US and were meant to cater to the large open spaces that we have…and as a result, the turning radius on a Cruiser (And Touring as well) is not anywhere near as good as a Sports Bike. Because for those of us who have driven through parts of the Midwest, there’s not much need to turn when you’re just going straight on a highway through America’s heartland.

Sport Bikes – These are the ones that just look fast. They’re aerodynamic, light, and can speed like no other. If you’ve ever been driving on the highway and saw a motorcycle speeding past at 100 MPH, it’s probably one of these. Along with the many other differences a Sports Bike has from other Motorcycles, a big one is the positioning of the rider. They’re low and close to the motorcycle to increase their aerodynamics (among other reasons). These are are the bikes that are referred to as “Crotch Rockets”.

Touring – These motorcycles are the one’s that you would take on a cross country trip. They’re huge (even bigger than cruisers), have a lot space for your luggage, and are the most comfortable for long rides. The rider sits upright with support (like a chairback), as opposed to only having a seat to sit on like a Sport Bike and these usually have the largest gas tanks to sustain long rides.

Sport Touring – As you’d might imagine, Sport Touring can combine the best of both worlds from Sports Bikes and Touring Motorcycles. You have the comfort (and usually the big size) of a Touring bike and the amenities of a Sports Bike with a tighter turning radius, greater shocks and just the look of a sportier motorcycle which many people prefer.

Standard – These are the classic motorcycles. You sit upright…no seatback, no laying on the motorcycle, and just ride it. When you may think of a bike from the 40’s and 50’s, these may come to mind….although they have been making a resurgance because of their timeless appearance. Arguably the most famous of the Standard motorcycles is the Triumph Bonneville (As pictured below). 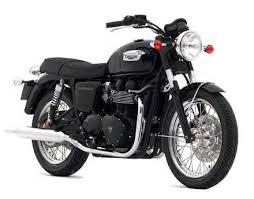 Off-road – Again, as the name may indicate…this is the bike meant to be ridden on dirt roads (Hence why they’re sometimes referred to as dirtbikes). Meant to be light, with a lighter engine and great shocks this can (and often does) take a beating. These are the one’s used for Motocross and the X-Games and usually have a plastic body, because they’re not as “beefy” as a vehicle on a road should be…they aren’t allowed to drive on street.

Dual – As was mentioned before, all of the motorcycles (Except Off-road) are legal for the street. But what can those people do who want to ride a dirt bike on the trails and the street? You see where I’m going with this…those people can get a Dual bike. They combine the characteristics of an offroad bike, the lightness, shocks, etc. with some extra horsepower to be able to ride on the roads.

One Last Note: Scooters, while they have two wheels, are not a motorcycle…and not manly.

Your First Job: Buying a Work Wardrobe Before Receiving Your First Pay Check