Fall to many twenty somethings means “buy many boots ASAP.” Every Fall, I scope out stores such as TJ Maxx, Marshalls, DSW, and Target for decently priced pairs of very cute boots (black or brown). Most often, I end up finding great deals for boots. I am then happy with these boots for a few months until the heel of a boot’s wedge comes off, the suede of another boot gets covered in salt from the snowy weather, and another pair of boots gets so worn out that they 1. smell and 2. start to fall apart. That is why I decided to change up my purchasing plan this Fall.

I always thought the more the boots the better… the more colors and styles the better… and style is pain. These are all true – but not to the extent I was taking it. Instead of buying many cheap pairs of boots this season, I decided to invest in one nice, stylish pair of boots (that wouldn’t cover my feet in blisters). Of course this meant a trip to no where other than Nordstrom AKA the land of awesome shoes and unbeatable customer service. 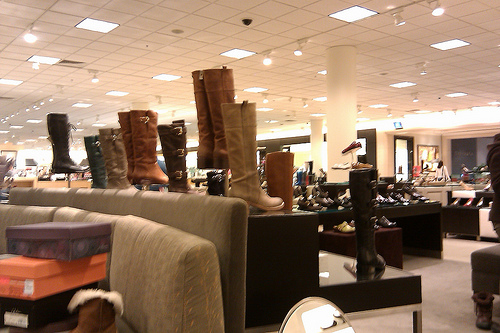 I tried on boot after boot. Mostly ones between $100 and $200 dollars because – let’s be serious – I barely have enough money to pay my rent as it is. Some boots were boring and not worth the money… And others were exactly what I wanted, but were way too small in the calf area. If you don’t already know, most boots do not come in sizes according to your calf – meaning if you have ANY muscle, you are limited the number of boots you can actually fit into.

While scanning the many shoes filling the second floor of my nearest Nordstrom, my eyes kept going back to the same boots. The Fryes. I knew Frye Boots were NOT in my budget, but I loved them. And like most people, when I want something THAT bad it turns into a need. I needed to have them.

So I tried them on. I only looked at black boots because if I was going to even think about spending a couple hundred dollars on boots, they would have to be black. First, I tried on the “Melissa Button” boot – the classic of all the Fryes. They were very cute and comfortable, but tight around my calves… The fact I could get them on made me happy enough, though. Nordstrom also said they sell some of the Fryes – including the Melissa’s – in a “wide calf” size. And if that’s not wide enough, they can stretch the calves for you to make more room.

Next, I tried on the Veronica Slouch boots. These ones had 2 belt buckles, were definitely trendier, and fit my calves. I was in a dilemma. I wanted both. Of course, I couldn’t actually buy both since I didn’t have $700 casually lying around waiting to be spent on two pairs of boots… so I weighed the pros and cons. As I said before, the Melissa’s were tight around my calves. They also didn’t have much support on the bottom of the boot, which would make for a slippery winter. The Veronica’s had a great bottom for the winter and fit my calves. However, since they were trendier, I wanted to make sure they would be in style for the next 10 or so years (or longer if I could make them last!).

Since the Veronica’s weren’t too trendy, I ended up buying those… and I will never regret the purchase. At first, I bought them in a size 8 (my size), but ended up exchanging them for a 9 because they were way too tight, covered my ankles in blisters, and made me want to cut off my feet after five minutes of wearing them. The 9’s had much more room (which is great for warm socks come winter), BUT they really hurt my ankles for a while until I “broke them in.” About three weeks later, as I was walking into my apartment building, the door shut behind me and the bottom belt buckle completely ripped off the boot! I was absolutely devastated… After paying $350 for a pair of boots, this should not happen. I took them back to Nordstrom the next day and the guy at the register literally shrieked at the sight, ran to the back of the store, and came out with a new pair. He said that never happens and they must have been a defected pair.

The new pair fit perfectly. I didn’t even have to break them in. I am so happy I went through all that trouble and spent the money because they are comfortable, stylish, and timeless. They will last well over a season, unlike my other shoes, and will be okay to wear in the ugly winter weather (unless its a snow storm).

Lesson learned: It’s better to spend more money on one fantastic item that will last forever and be comfortable, rather than spending money on multiple trendy items that will last a season and give you blisters. I highly recommend Frye Boots if you can save up for them! And if not, I recommend at least buying a nice, less expensive pair of boots (from Nordstrom) that you will be able to wear again this Spring! Happy boot shopping twenty somethings 🙂

Gluten Free Friday: A Day In The Life