I am a huge fan of Halloween. I love the excuse to eat candy for breakfast, dress up in silly costumes, and of course the Halloween movies.

And if you’re wondering what is appealing about screaming at the top of your lungs to a television screen, it’s something about yelling at the stupid person on the screen who thinks it’s a great idea to turn around that dark corner by herself. It’s always fun to watch. You know things are about to go horribly wrong, but you just can’t look away (kinda like watching an episode of the Bachelor).

Right now the clock is ticking for you to scramble around and figure out what your costume will be this Halloween. Between working at your 9-5 job and trying to fit in the creative-costume crafts, you’re probably starting to feel exhausted from the pressure of it all. It might be time to give yourself a break, so light your nearest fall-scented candles and pop in a movie fit for the season. 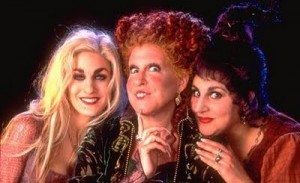 Here’s a list of movies that you need to catch before October 31 is here:

Hocus Pocus- I’m sure you expected to see this one on the list, but c’mon it’s a classic.  Max, a Halloween-hater (the nerve!), is angry that he has to take his little sister trick-or-treating to further ruin his reputation. He lights a candle and the evil Sanderson Sisters awake from their lengthy slumber to wreak havoc on Halloween. This movie has comedy, romance, some high-quality music and suspense – it’s a must-see!

Practical Magic- This is one of my all time favorite movies starring Sandra Bullock and Nicole Kidman. A curse follows the woman of their family who fall in love around like a beetle – no guys it’s seriously a beetle, forget symbolism here. Sandra Bullock decides she’ll create a potion to create an unrealistic man, so she never had to endure the suffering that love can cause, while her sister is busy falling in love with a dangerous man. Watch and see how this magical love story unfolds. I promise it’s well worth it!

Saw- This franchise definitely took the whole sequel thing way too far, but the first one is absolutely worth a watch. Make sure you have a strong stomach before you press play on this one though, otherwise you might regret it fast. This movie is full of psychological twists and turns, and you’ll never guess what’s coming next. I STILL can’t close my closet doors after watching and I saw it. Be sure to watch this one with a friend.

Texas Chainsaw Massacre- Gore, shameless sex scenes and idiots who always find themselves in the wrong place at the wrong time all contribute to the quintessential Halloween flick and this one has it all. It may not have much of a plot, but it’s full of abandoned roads and scary-men chasing you. And who doesn’t want that? This one also takes a strong stomach, but sometimes a good gory flick is necessary.

The Ring- Just saying the name of this movie makes me a little anxious. Samarah is probably the one the scariest characters of all time. Her jet-black hair covering her face will most likely give me nightmares again just from writing about it. I swear, after I saw this movie I was afraid every time my phone rang for at least a month. So if you’re looking for an anxiety filled hour, where you’ll probably cringe with fear, this is the pick for you. Is that my phone ringing?

Casper- Ah, the friendly ghost. Casper is the innocent little ghost that we all want haunting our house. His relationship with the angsty-teenager is adorable and watching him try to humor his obnoxious uncles never gets old. I have to make sure I catch this classic before Halloween is here!

I know I forgot some movies, so fill in the blanks 20-somethings! What else do you think belongs on this list?

Flashback Friday: 8 Cliche Halloween Costumes I Wore As A Kid