If you read my previous post about my Cape vaca, then you know I was there this past weekend from Thursday to Monday. And if you know me, and have read my obsessive dieting posts, you might know that I am obsessed with my scale. So would you be so totally surprised if I told you I brought my scale with me on vacation? Probably not…

I bring it with me to my boyfriends, even if I’m only staying the night… and I brought it with me to school… It is the only personal trainer I can afford. When it tells me I lost weight, I want to lose more! And when it tells me I gained weight, I want to lose it asap. Without it, I become lost and will eat, drink, and feel as though my actions have no consequences (which apparently they don’t as I learned this weekend, but that is a story not for the blog)…

No one seemed to understand why I brought a scale on vacation and I wasn’t going to try and explain. But people were not thrilled with the idea of it being on the bathroom floor… Anyway, I put it next to the “pool” – which was not actually a pool… it was a tiny bathtub with jets that was falsely advertised as a “jacuzzi” – not thinking that it would get wet or anything… and the next morning, my scale was broken… It would not turn on!!! I bought that scale in high school… We had been through so much together! And it was broken.

Karma. My scale definitely broke as karma for bringing one on vacation with 20 of my crazy friends. I somehow survived the weekend without it – sticking to Bethenny’s Skinny Girl Margaritas, bbq food, snacks, and The Captain – but it was hard! So what’s the first thing I did when I arrived home? I went to Target and bought a new one! And let me tell you – I bought the coolest scale ever. 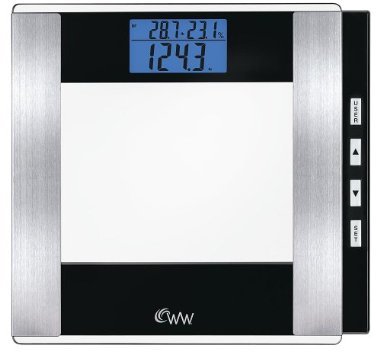 It tells you your BMI, Body Fat, Body Water, some other stuff, and your weight (duh). I stepped on and off this scale a bunch of times over a period of 20 minutes and the weight stayed the same!! My other scale would change every second – literally. So I guess you could say this is pretty accurate. You create users on it and put in your sex, age, and height to get accurate readings… Its pretty cool. Anddddd it was $40, so cheap but not that cheap when you can get scales for $7… but honestly, that would be the worst scale ever. If I didn’t want to other percentages, I would have spent around $25. And with my post-college salaried job, I can afford scales such as this one. 🙂

And now for the moral of the story – I only gained 2 pounds since Thursday (it’s Tuesday)! After eating and drinking more than I have in the past 3 months all together, I did pretty, pretty, pretty good (as Larry David would say). I probably won’t bring a scale on vacation again… unless its a much tamer vacation with much less people. I don’t need to weigh myself every day… It just helps.

Snooki was NOT arrested in Italy

Suns out – Funs Out! Summer Activities