In elementary school I would go through career phases. For a few months, all I wanted to be was a lawyer. Then the spring came around and I wanted was to be a pop star. Check back a few months later and my dream was to be a teacher. It was very hard to keep track of my “Next Great Career Ambition.” Now that I’m a college graduate, I feel like I’ve regressed back to childhood. Kind of. Every few months or so, I come up with a “Next Great Idea”. Not necessarily a career ambition (although sometimes) but it’s an idea that, at the time, seems like a great plan. A plan that will inevitably bring happiness, wealth, freedom, or maybe all of the above. After a few weeks of thinking about this idea I realize, “Wow, this is kind of ridiculous. Yeah, this is definitely not plausible” and I’m over it the new plan as quickly as I thought of it. That is until my “Next Great Idea” comes along. When I was in high school, I assumed that after college Real Life began. I thought after college you just had everything figured out and you worked a job and made a lot of money, or maybe you came up with a Million Dollar Idea and retired by age 30. I had no idea that post-college life contained as much (if not more) uncertainty, change, and confusion as teenage life. When will I stop coming up with my “Next Great Idea” and just settle into a routine life? I’m not totally sure. I know that at 23, this uncertainty is probably normal. Maybe even endearing. At 27, probably not so much. Here’s a look at some of the things I’ve wanted to do since graduating:

Go to grad school: I was a Broadcast Journalism major as an undergrad, but I thought going to grad school for Magazine Journalism might help me further my (recently-discovered) love of writing. The program sounded amazing, but I realized it wasn’t worth the $55,000 of debt I would be in when I finished.

Quit my job and become a yoga instructor: I love doing yoga. It’s a great workout and it’s so relaxing. I love doing it so much that I thought about making it my career. After some Google research, I found out that not only do you need a lot of training to teach yoga, you also need to be able to do a headstand. I also realized that I would probably have to teach classes at 6 a.m., which is not my finest hour. I quickly came to the realization that I can still love yoga and take yoga classes without having to quit my job and dedicate my life to being a yoga instructor.

Quit my job, write during the day, and be a bartender at night: Clearly some of these ideas came about during a rough week at work. During one of these times, I thought I’d be better off if I quit my job, did my freelance writing during the day and then worked as a bartender at night. This actually isn’t a horrible idea. Bartenders make good money, and it seems like a fun job. But I don’t think I could pass up a steady 9-5 job with a good salary and benefits to work at a bar. Drunk people annoy me, except if I’m the one being drunk (then obviously I’m the funniest person ever). I only like to stay up late when I’m drunk, otherwise I go to bed early. I just don’t think the bar lifestyle is the one for me right now. Maybe if I have a quarter life crisis in the future. But not right now.

Move to New York City and work at Starbucks until I find another job: Most of my friends from school live in New York City. Sometimes (most of the time) I just wish that we all lived together. I wish that I could just move to New York City and find a way to make money later. What? It works in the movies. Why couldn’t it work in real life? Okay, besides the fact that full-time, normal work is nearly impossible to find. For a day or two I considered leaving my full-time job (and benefits) to move to New York City and work at Starbucks (or another minimum wage job). Would it be worth it to be near my friends? Absolutely. Would it be worth it to be in a big city like New York? Definitely. Would it be a good career move? Probably not. Would I be able to feed myself and live comfortably? No. Problem solved.  If I had leads to another job, this would be a possibility. But just blindly leaving a good job with no possibilities for another full-time job is a little insane with the way the job market is right now.

Does your “alum” status have you coming up with all kinds of schemes and plans like me? Or are you finding yourself settling into a routine? With my childhood behavior in mind, shouldn’t be surprised that I’m always full of “great” new ideas, but I think I have more of a chance of being a pop star than a yoga instructor. Back to the drawing board. 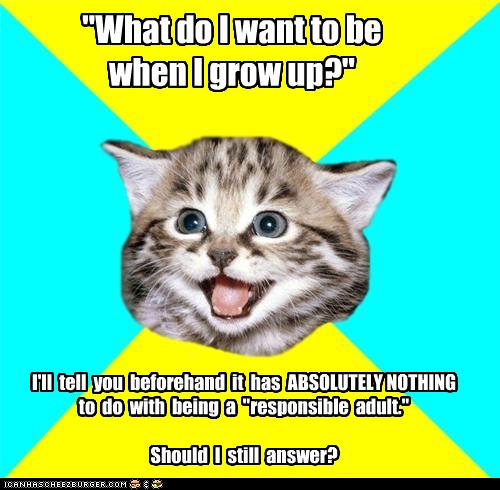 Shopping Through The Years: From Middle School to Now